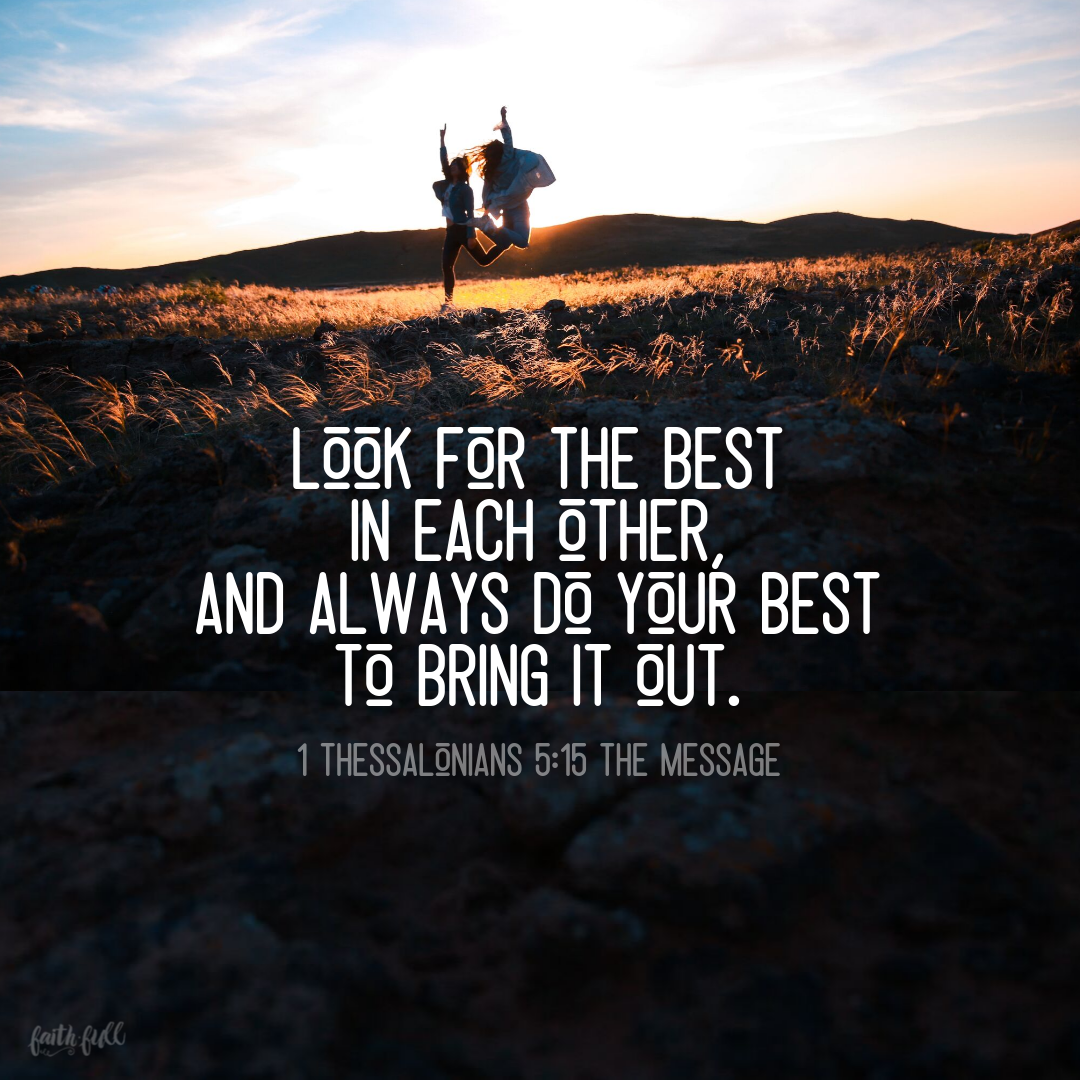 Therefore encourage one another and build each other up. — 1 Thessalonians 5:11 NIV

A desperate woman once came to see Jesus. She was out of doctors, money, and hope. But worst of all she was out of friends. Her sickness rendered her ceremonially unclean, cut off from her family and any house of worship. For more than a decade she’d been ostracized from people. Then Jesus came to town. He was on his way to treat the daughter of the synagogue leader. The crowd was thick, and people were pushing, but she was desperate. Threading her arm through the crowd, she reached the hem of his garment. And when she touched the hem of him, the bleeding stopped.

The woman shrank back. A dozen years of rejections had made her wary of attention. But Jesus said again that someone had touched Him. And this time she spoke up.

She came shaking with fear and knelt down in front of Jesus. Then she told Him the whole story. — Mark 5:33 CEV

The whole story! How long had it been since someone had listened to her story? Jesus took time to hear her speak. He had reason not to do so. The crowd was waiting, the city leaders were standing, a girl was dying, people were pressing, the disciples were questioning, but Jesus? He was listening. He stopped what He was doing, and He listened. He didn’t have to. Healing the affliction would have been enough. Enough for her. Enough for the crowds. But not enough for Jesus. He wanted to do more than heal her body. He wanted to hear her story. The miracle restored her health. The listening restored her dignity. And what He did next, the woman never forgot. He affirmed her. He called her “daughter.” This is the only time in the Gospels that He called a woman by that name.

Do this for someone. Ask someone to tell you his — or her — story. Resist the urge to interrupt or correct. Turn off the television. Log off from the internet. Close your laptop; silence your cell phone. Give the rarest of gifts: your full attention.

Praising abundantly. Biblical encouragement is no casual, kind word but rather a premeditated resolve to lift the spirit of another person.

Let us consider how we may spur one another on toward love and good deeds. — Hebrews 10:24 NIV

John Trent recalls a story about a young father whose daughter was going through the “terrible twos.” She was cute but strong-willed and almost more than he and his wife could handle. The father decided to take the child out for breakfast and tell her how much they valued and loved her. Over pancakes he told her, “Jenny, I want you to know how much I love you, and how special you are to Mom and me. We prayed for you for years, and now that you’re here and growing up to be such a wonderful girl, we couldn’t be more proud of you.”

When he finished, his daughter said, “Longer, Daddy,… longer.” The father continued to affirm and encourage her. Once again when he attempted to stop, she pleaded for him to keep going. She did so two more times. “This father never did get much to eat that morning, but his daughter got the emotional nourishment she needed so much. In fact, a few days later, she spontaneously ran up to her mother and said, ‘I’m a really special daughter, Mommy. Daddy told me so.’”2

Do you know someone who needs unbridled encouragement? Of course you do. Everyone needs a cheerleader. So be one.

Look for the best in each other, and always do your best to bring it out. — 1 Thessalonians 5:15 The Message

In the mid-1930s a YMCA instructor pitched an idea for a class to his supervisor. It was based on some principles he had learned while working as a salesman in Warrensburg, Missouri. The directors couldn’t afford to pay him the regular two-dollar-a-night fee, so he agreed to teach it on a commission basis.

Within a couple of years the course was so popular the instructor was earning thirty dollars a night instead of two. A publishing executive heard the messages and encouraged the instructor to compile them in a book. Dale Carnegie did. His book How to Win Friends and Influence People stayed on the New York Times bestseller list for a decade. What is the message of the book? Arguably it can be reduced to one phrase: “Encourage one another.” The chapter “The Big Secret of Dealing with People” urges readers to “be hearty in your approbation and lavish in your praise.”3

Here is an idea. Call a friend or relative, and begin the conversation with these words: “Can I have 120 seconds to tell you what a great person you are?” Then let it loose. Build him up. Affirm her. Embarrass him. Drench her in words of encouragement. Imitate the apostle Paul, who told his friends in Ephesus,

I didn’t skimp or trim in any way. Every truth and encouragement that could have made a difference to you, you got. — Acts 20:20 The Message

Years ago I became friends with a preacher in Houston. After a wonderful meal together he asked me, “Do you do text messages?” (I’m old enough for him not to make assumptions.) I told him I did, so we swapped phone numbers. A few days later I received a text from him saying, “I am changing your name. You are no longer Max. You are Mighty Max!”

You might think I’d shrug off such a title. I’m a sixty-four-year-old minister. I operate in the formal world of pulpits and Bible study. Mighty Max? That’s the stuff of elementary school playgrounds, right?

Not to me it isn’t. When I see his name on my phone, I hurry to open the text. I love to be encouraged. We all do.

So let’s make happiness happen. Let’s encourage one another.

2.Gary Smalley and John Trent, Leaving the Light On: Building the Memories That Will Draw Your Kids Home (Sisters, OR: Multnomah, 1994), 27–28.

Have you ever had someone look you in the eye and hear your whole story? We can bless people with that same attention. We can bless people by pouring into them as Jesus did with love, hope, and encouraging words. Let’s make happiness happen! Come share with us on our blog about who you’re going to encourage! We want to hear from you. ~ Laurie McClure, Faith.Full