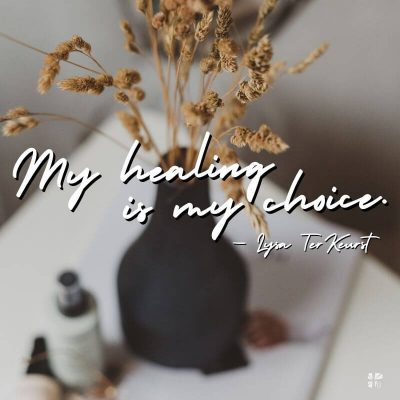 Editor’s note: This year has been hard on all of us, hasn’t it? 2020’s losses have been big, our emotions have been big, and relationships have taken big hits. Forgiveness sometimes seems impossible. Cruel even. Lysa TerKeurst understands as she has gone through personal crises in the last few years beyond the breaking point and yet has felt called to forgive. A gargantuan task. We invite you to hear her story and ask the Lord to speak into those broken places within each of us that need His freedom in forgiveness, too.

I walked into my appointment with my counselor, Jim, wishing I’d canceled. But this wasn’t a typical hour-long appointment. It was an all-day intensive too costly to blow off.

I hadn’t been sleeping well. My eyes were puffy. And I couldn’t remember for the life of me if I’d put deodorant on. Awesome. I wondered if the peach air freshener I’d seen before in the office bathroom could work in a pinch. I made a mental note to try it during our next bathroom break.

I felt utterly unmotivated to talk and overly motivated to cry. My hair was heavy with dry shampoo and tangled from a lack of proper brushing. I tried to no avail to smooth it down with my hands before twisting it up haphazardly in a top knot, fully aware I should have washed it two days ago.

But who has that kind of energy when life feels suddenly emptied out in the most unfair of ways? Empty has a heaviness to it that doesn’t exactly motivate one to care what they look like.

“Jim, I don’t know how to forgive this. He isn’t sorry for what happened. Neither are some of the other people involved in this situation who also hurt me. They don’t think they did anything wrong. They have no feelings around this at all. They are off just enjoying the mess out of life. And here I am sitting in a counselor’s office so full of hurt feelings that I wonder if it’s possible for me to drown in my own tears. How can I possibly work on forgiveness when not one ounce of me feels like forgiving? I don’t want to do this. I may be a total wreck right now, but one thing I’m not is fake.”

I fully expected him to recognize that it clearly wasn’t time for me to work on forgiveness and that we needed to switch the day’s focus. There were plenty of other things I could clearly benefit from tackling. Personal hygiene, for example, might be an obvious choice.

I don’t remember what Jim said to all of my resistance. I just remember we stayed the course, and what I learned about forgiveness that day changed my life.

Jim didn’t seem a bit concerned that I didn’t have the desire to forgive or that my feelings weren’t cooperating. It almost seemed like the intensity of my resistance made doing this exercise on this day more appropriate in his estimation, not less. That confused me. I certainly didn’t want to add “forgiveness failure” on top of everything else I was beating myself up about in this season. It was definitely time to go find that peach air freshener.

When I returned, smelling like a freshly baked cobbler, Jim handed me a stack of 3×5 cards. “Lysa, do you have the desire to heal from this?”

I nodded my head yes. I did want to heal.

I did want to start making my way out of this pit where everything felt dark and confusing and hopeless. But I thought in order to start healing, I needed to feel better than I did about my circumstances and about the people involved.

At that point, so much felt unsettled in many of my relationships. When a person’s life explodes, people around them have different reactions. You see the very best forms of compassion in most people, but not in everyone.

I hadn’t just lost what I thought was true in my marriage. I was also trying to navigate the shock of all the unpredictable ways people had reacted to what happened.

I knew it would take me years to sort through the fallout.

But, by far, the most complicated reality at that time was that I hadn’t seen Art in months. We were separated. And there were layers of complicated realities that prevented us from being able to sit down together and process what happened.

How could I possibly start healing when there was no resolution or restitution or reconciliation with Art or the others who hurt me?

I thought everything needed to be settled.

I thought those who did wrong things would first realize they were wrong.

Or, at least some kind of justice would tilt my upside-down world back in place.

And something about this would feel fair.

Then, I would consider forgiveness. And then I could possibly heal.

But, as my counselor kept talking, I started to realize I might never feel like things were fair. Even if every best-case scenario played out with the people who hurt me suddenly being utterly repentant and owning every bit of all they’d done, that wouldn’t undo what happened. That wouldn’t erase the damage. That wouldn’t take away the memories. That wouldn’t instantly heal me or make any of this feel right.

And, chances were, most of the big situations where I got hurt were not going to play out in best-case scenarios. Big conflicts are rarely that tidy.

Therefore, I had to separate my healing from their choices.

My ability to heal cannot depend on anyone’s choices but my own.

I remember exactly where I was standing when I finally realized what my counselor Jim had been trying to teach me about separating my healing from others’ choices. I was in Israel. It was a hot day. I wanted the guide to hurry up and finish what he was saying so we could go somewhere cooler. But then he said something that jolted me: “Jesus didn’t perform very many healing miracles in Jerusalem, or at least not ones that were recorded.”

My whole life when I read about the miracles of Jesus, I imagined most of them occurring in and around the city of Jerusalem. I’d been to the Holy Land to study the Bible many times, but it wasn’t until my eighth trip that the guide pointed this out.

In both cases, their healing came after a choice they made to obey the Lord, a choice not dependent on anyone else’s actions. At first, the lame man thought he needed the cooperation of other people to help him get to the water when the angels stirred it, according to the superstition believed by many. So, when Jesus asked him, “Do you want to be healed?” the lame man’s response wasn’t “Yes!” Instead, he gave Jesus an excuse based on the fact that no one would help him get to the water.

Isn’t it amazing that the man was so focused on what others needed to do that he almost missed what Jesus could do? This challenges me on so many levels. I haven’t been paralyzed like this man, but I very much know what it feels like to be unable to move forward without other people cooperating like I think they should cooperate. Jesus, however, never commented about the people on whom the paralyzed man seemed so fixated.

Jesus simply instructed him to get up, pick up his bed (also called a mat), and walk. The Bible then says,

And at once the man was healed, and he took up his bed and walked. — John 5:9 ESV

The healing didn’t involve anyone but the paralyzed man and Jesus.

The other miracle, with the blind man, is found in John 9.

We don’t read much regarding the blind man’s thoughts about others around him. But we do read that the disciples very much wanted to know whose actions caused the blindness. Someone needed to be blamed. Someone was at fault.

Jesus blew that assumption apart. He didn’t place blame or shame on anyone. He said this man’s blindness “happened so that the works of God might be displayed in him” (John 9:3). Jesus then spat onto the ground, mixed up some mud, and rubbed it onto the blind man’s eyes, instructing him to go and wash in the pool of Siloam.

Jesus had compassion.
Jesus had the power.
Jesus didn’t make healing contingent on other people doing or owning anything.
Jesus gave the instruction. The blind man obeyed. Jesus healed.

I’m not sure of all the nuances he intended with that statement. But for me, I couldn’t grab my journal to record this revelation fast enough. And I wrote, “For me to move forward, for me to see beyond this current darkness, is between me and the Lord. I don’t need to wait on others to do anything or place blame or shame that won’t do anyone any good. I simply must obey whatever God is asking of me right now. God has given me a new way to walk. And God has given me a new way to see. It’s forgiveness. And it is beautiful.”

I have to place my healing in the Lord’s hands. I need to focus on what I can do to step toward Him in obedience. And forgiveness is what He’s asking of me.

I must separate my healing from others’ repentance or lack thereof. My ability to heal cannot be conditional on them wanting my forgiveness but only on my willingness to give it.

And I have to separate my healing from any of this being fair. My ability to heal cannot be conditional on the other person receiving adequate consequences for their disobedience but only on my obedience to trust God’s justice whether I ever see it or not.

My healing is my choice.

I can heal. I can forgive. I can trust God. And none of those beautiful realities are held hostage by another person.

Healing will take time. But I must move forward toward it if I ever hope to get there. And forgiveness is a good step in the right direction. Not just good, but necessary.

It feels like people should repent before we forgive, doesn’t it? It feels like there needs to be restitution before we step into letting them off the hook for their bad behavior, right? But, it’s not what God calls us to. Forgiveness is on our side alone. Our healing is our choice and no one else’s! Come share your thoughts on forgiveness on our blog. We want to hear from you! ~ Devotionals Daily