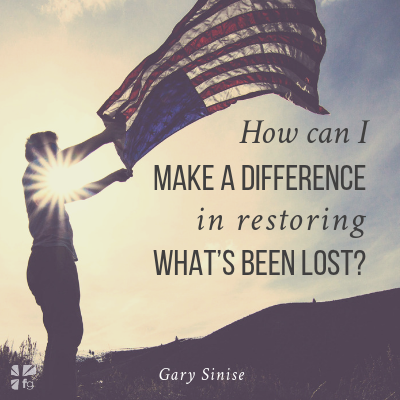 Editor’s Note: When actor Gary Sinise took on the role of Lieutenant Dan Taylor for the 1994 film Forrest Gump, he had no idea just how it would change his life forever. Not only did his performance garner an Oscar nomination, but it set Sinise on a new path — one of service on behalf of those who serve their country. Enjoy today’s excerpt from his book Grateful American: A Journey From Self to Service and learn more about his work at GarySiniseFoundation.org.

On this August day in 1994, the wind is blowing hot and humid throughout Chicago. Event organizers have told me more than twenty-five hundred disabled veterans are waiting for me in the air-conditioned ballroom at the Conrad Hilton Hotel. I’m here to receive an award at the national convention of the Disabled American Veterans (DAV), an organization whose motto is “Fulfilling our promises to the men and women who served.” This is my first time at the convention. I’ve met disabled veterans before, one or two at a time, but never so many gathered in one spot. I imagine I’ll walk into a sea of wheelchairs, crutches, and prosthetics, but I don’t really know what to expect.

Organizers have led me down a back way through the clatter of the hotel’s kitchen. We’ve sidestepped waiters and food prep staff and approached the ballroom doors from the kitchen entrance. Now we wait for the cue to come in. I can hear my voice being broadcast throughout the auditorium. Forrest Gump, the movie where I play a character named Lieutenant Dan Taylor, has been out for about six weeks, and event organizers are showing clips in the ballroom. At this point in my career, I’ve been in lots of plays and on a few TV shows, including American Playhouse broadcasts of Sam Shepard’s True West and John Steinbeck’s The Grapes of Wrath. I’ve even had a few credited roles in movies: Of Mice and Men, A Midnight Clear, Jack the Bear, The Stand. But I’ve never had a role that’s received as much attention as Lieutenant Dan.

It’s a new experience. The movie has already exploded in popularity, and more and more I’m getting recognized in public. As a result, the DAV has kindly provided me with a suite at the hotel and kept me away from the crowds.

Lieutenant Dan is a disabled Vietnam veteran who loses his legs in combat. He carries terrible guilt after leading his platoon into an ambush where many of his men are killed or wounded, and he wishes that instead of surviving with his injury he’d been killed along with his men. His post-traumatic stress¹ buries him in alcohol abuse and dark isolation. His friend, Forrest Gump, also a Vietnam veteran, is a good-hearted and simple minded man who receives the Medal of Honor for saving Lieutenant Dan’s life, as well as the lives of other members of their platoon.

Through the ballroom doors, I hear the scene that’s being shown. The characters’ combat days are over, and Private Gump (played by Tom Hanks) reunites with me, his lieutenant, in New York City in 1971 during the holiday season. Christmas is in the air, and I’m confined to my wheelchair. My hair has grown to my shoulders and is unkempt. I set down my whiskey bottle long enough to probe Forrest with a sneering question:

LIEUTENANT DAN: Have you found Jesus yet, Gump?

FORREST: I didn’t know I was supposed to be looking for him, sir.

LIEUTENANT DAN: [Chuckles wryly.] That’s all these cripples down at the VA ever talk about. Jesus this and Jesus that. Have I found Jesus? They even had a priest come and talk to me. He said God is listening, but I have to help myself, and if I accept Jesus into my heart, then I’ll get to walk beside him in the kingdom of heaven. [Enraged, Lieutenant Dan throws the bottle, glares at Forrest, and shouts:] Did you hear what I said? WALK beside him in the kingdom of heaven.

A clip from later in the film begins. Lieutenant Dan has found his way to Bayou La Batre, Alabama, and goes to work on Forrest’s shrimping boat. One dark night, a squall comes up, a real act of God. All the other shrimping boats sensibly return to port, but Forrest and Lieutenant Dan stay out at sea. During the storm’s fiercest moments, Lieutenant Dan climbs to the top of the mainmast, shakes his fist at the sky, and yells out at the wind and the waves: “You call this a storm?… I’m right here, come and get me! You’ll never… sink… this… boat!” In an utter showdown with Providence, he vents his frustration, disappointment, grief, and rage.

In the next scene the storm is over, and the sun is out. Forrest’s boat is the only one that’s survived the hurricane. Lieutenant Dan sits on the edge of the boat. He’s finally let go of the anger, fear, and resentment over what has happened to him. He looks his former private in the eyes and says quietly, “Forrest, I never thanked you for saving my life.” After a smile to his friend, he hops into the calm waters of the ocean and floats on his back into the distance, finally at peace, the sun breaking through the clouds as if lighting the way forward. In a voice-over Forrest says, “He never actually said so, but I think he made his peace with God.”

As the clips continue in the ballroom, I think about how this character seems to have resonated with a lot of people already, especially those in the veteran community. Shortly after the movie’s release, Gary Weaver, a Vietnam vet who worked for the DAV, invited me to the DAV convention so that the organization could present me with an award for “an honest portrayal of a catastrophically injured veteran who served his country.” That’s why the DAV has brought me to this ballroom at the Hilton — to honor me for my “hard work” on the film.

Hard work?! Waiting outside the ballroom doors, I stifle a snicker at the absurdity. Compared to what the people in this ballroom have gone through, my job isn’t close to hard work. All I do is find my mark, say my lines. Hard work is being far from home and up to your elbows in dust, crawling along the ground while the enemy shoots at you, wondering when the bullets will stop flying long enough so you can grab an MRE and wolf down your next meal. That’s hard work.

“Ready?” asks the organizer. His hand reaches toward the door handle.

He opens the doors to the ballroom and I walk inside.

The entire ballroom erupts into applause. I choke up immediately. The spotlight is focused on the podium, center-stage, where I’ll give my speech. I walk up the wheelchair ramp leading to the podium and glance around. It’s a massive ballroom filled with hundreds and hundreds of disabled veterans plus their family members. Some of the veterans wear their uniforms. Others wear civilian clothes with hats that show which war they fought in or the unit or branch of the military they served with. The atmosphere in the room is electric. I see a wide range of ages, wounded veterans from World War II to the present. It’s a sea of men and women, many with scars, prosthetics, burn marks, crutches, and wheelchairs — and all wearing the unmistakable look of pride. They’re clapping, cheering wildly, whooping, calling my name.

I am stunned. Humbled. The lump in my throat won’t go down. What have I ever done? Here are all these wounded and disabled veterans — men and women who have sacrificed so much — honoring me for merely playing a part in a movie.

The cheering continues, and I make my way to the stage, clear my throat, and choke out a few words. “I’m not prepared for the emotion I feel right now,” I say spontaneously, and I pause again. Looking out at the audience, I realize why they were applauding. Lieutenant Dan has somehow become more than just a character in a movie. To these veterans he has become a symbol of our country’s collective awareness of all our injured veterans, especially the Vietnam veteran. Already this character has grown beyond anything I could ever imagine.

Somehow, I manage to finish my words, and when I’m done speaking, the DAV national commander, Richard Marbes, presents me with the award. Richard is an injured veteran, and due to his time in service he’s standing on crutches with his right leg missing up to his hip. The award he presents to me is called the National Commander’s Award, one of the DAV’s highest honors. I make the mistake of reading the award’s wording: “Your superb performance brought awareness of the lifelong sacrifice of disabled veterans back into public consciousness in a remarkably positive way.” One word of that inscription stops me cold. But I don’t know what to do with it at first.

Still taken aback by that word, I come down off the stage, award clutched in my hand. People make some more remarks. The event concludes. I shake hands and pose for pictures. Scribble autographs and give hugs. Smile and say to as many veterans as I can, “Thank you so much for serving our country,” and I’m choked up now for a new reason. That single word has lodged itself deeply into my mind. The word has burned its collective sorrow and shame into me, and it’s made me say a silent vow to do everything in my power to overturn all the wrongs it stands for. The one word is back.

“Your superb performance brought awareness of the lifelong sacrifice of disabled veterans back into public consciousness in a remarkably positive way.”

That one word embodies the reality that honoring veterans hasn’t always been the norm in America. When our troops came home from World War II, they were given ticker-tape parades, but when they came home from Korea, they were largely forgotten. And when they came back from Vietnam, they were greeted with anger. Spit upon. Called names. Hit with wadded-up lunch sacks filled with feces. There were no welcome home parades for our Vietnam veterans.

When our veterans returned from the first Gulf War, unlike Vietnam, they were greeted with giant parades in New York and a few other cities. Yet even though our country eventually tried to make amends with Vietnam veterans by supporting them as they created the Vietnam Memorial in DC, and with some cities hosting in the mid-1980s a few welcome home parades, now in 1994 I can still sense remnants of this rift in our country, this still-open wound for the veterans of the Vietnam War. Little do I know how significant this moment at the convention will become in my life. Seeds are being planted that will grow into a tree with many branches. For it’s here that I first begin to ask myself: How can I make a difference in restoring what’s been lost? How can I help make sure our veterans are never treated that way again?

Excerpted with permission from Grateful American: A Journey from Self to Service by Gary Sinise. Copyright Gary Sinise.

And check out this clip as celebrities & friends of Gary strive to be #GratefulLikeGary:

Do you know a veteran? How can you better appreciate their service? How can you help bring God’s grace to those who have faced the trauma of war and trying circumstances? We’d love to hear your thoughts in the comments!

Read the rest of the story!

Get your copy of Grateful American today in the FaithGateway Store: