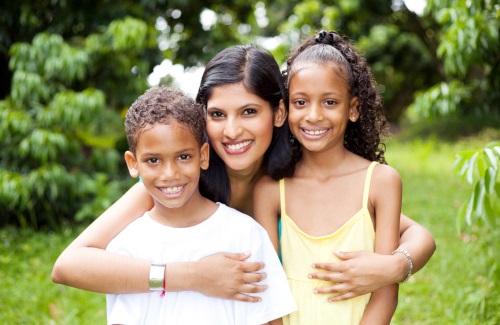 Big-kid parenting is just different from baby or toddler parenting. Where before you were vigilant, now you have to be strategic. And where before you were black-and-white, now you can start to add some color when parenting school-age children.  That’s why I want to show you how to help in that transition and get into the big kid mama groove.

4 Steps for Getting into the Big Kid Mama Groove:

1. Think before you act.

Back in your toddler-mama days, you had to think fast. Because if you didn’t make a diving leap in front of your kid as he walked toward the mud puddle, he was certainly going to find a way to get every drop of water from that puddle into some place that it didn’t belong. But now your kid is a big kid. And with that comes a measure of security. You probably don’t have to worry that he’s going to touch the hot coals in the fireplace or smear sweet potato puree onto the underside of the couch cushions. And that security buys you time to think a bit before you act. Nothing is as pressing as it was when your kid was small.

So what exactly does more-thinking, less-reacting parenting look like? It means instead of jumping to reprimand or reward your kid, you spend some time thinking about the best way to approach each situation. And—even more important—you allow your kid to spend time contemplating the best approach to each and every situation as well. So instead of jumping to your kid’s rescue when he’s struggling to figure out how to put together his LEGOs, allow him the space to ask for help. And when he misbehaves, don’t intervene immediately, but allow both of you some time to cool off and consider things. Because the more you allow yourself—and your kid—to think, the more he’s going to learn and grow.

2. Lean on God more than ever.

Letting go is hard. My motherly instinct is to hold on—to cling to my children as if                 they are mine to hold and protect. And while I know that God’s purposes for my children require independence, my mother’s heart still needs some convincing. Because when my eyes see big kids—kids who are ready to face the big, wide world and all that comes with it—my heart still sees those tiny, precious babies I once cradled in my arms. Tiny babies who have grown up way too fast.

I know I still have a lot more letting go to do—I can’t even imagine the tears I will shed when my tiny babies move on to middle school and then high school and—I don’t even want to think about it—college. But now, while each tiny step feels like a rite of passage of its own, I’m learning to lean on Christ more than I ever have before. I cannot fulfill my job as a mother by clinging to my own understanding—because my human emotions and desires stand in the way of God’s bigger picture. And only by turning to Christ will I teach my children that they, too, can turn to Him as they grow.

I’m a fixer. If I could, I’d like to pave the road for my kids with rainbows and cotton balls so that if they ever hit a snag, they’ll land on a cuddly cloud of softness. Anyway, when my son mentioned to me one day last year that a kid in his class—let’s call him Mr. Meanie Pants—had called him a “wimp” at school and refused to play with him at recess, I wanted to call up Mr. Meanie Pants’ mom and tell her exactly what I thought of her kid’s bully tactics. That’d teach him to mess with my kid.

But I didn’t call because I knew that part of growing up is learning to do things on your own. Well, that and I didn’t have Mr. Meanie Pants’ mom’s phone number. Instead, I prayed. I prayed that God would give Joey the insight to stand up for what is right. I prayed that Joey would learn how to discern right from wrong on the playground without becoming a bully or a victim. I prayed that I would know the words to say to help him learn important attributes, like courage and kindness and respect.

                I honestly don’t know what happened with Mr. Meanie Pants. I have a feeling that by the time they hit the playground on the next day, both kids had probably forgotten about the incident and had moved on. Because Joey never mentioned Mr. Meany Pants again in a negative light.

I have to say that the incident with Mr. Meany Pants taught me a valuable lesson. (And no, it wasn’t that playground politics should be left on the playground, although that’s important too.) I learned that while my mama-bear instincts might tell me to toss gumdrops and lollipops at my kids, to make sure their days are happy, my Christian instinct should always be to turn toward prayer. Because while I won’t always be able to fix things for my kids, I can always rely on God to stand in the gap for them.

Once your kid starts school, those easy-breezy days when you had nothing to do but sit around in your pajamas and read the same stories over and over and over are, well, over. And I’m telling you this because I know how much people love it when I state the obvious. But also because I want to save you the embarrassment that will certainly come when your kid shows up at school and tells his teacher that he spent his summer eating Cap’n Crunch out of the box because “mommy didn’t have time to wash the spoons.”

Schooling takes time—and whether you send your kid to school or homeschool, the amount of free time you have to just hang out with your kid will certainly decrease. But I’m a quality over quantity type of person. I mean, think about it: would you rather have a whole bag of M&M’s or one really amazing piece of rich, expensive dark chocolate? Okay, forget that analogy, because the obvious answer is both. But my point is that even if you don’t have a ton of time with your kid, you can still make that time count.

One thing I do is set aside after-school snack time as “us” time. I whip up a from-scratch batch of chocolate chip cookies—okay, I feed him Goldfish crackers—and spend a half hour talking to him about                 his day. I also try to do something fun as a family each weekend—go on a bike ride or go bowling—so there is something non-school and non-chore related that we can do together at least once every week. Whatever we’re doing, I make it a point to spend quality time with my kids every day.

Often we imagine that moving from the toddler to parenting school-age years will mean more free time and less stress for us as moms, when more often than no, the opposite is true. How have you navigated that transition with your own children? Leave a comment below. We’d love to hear from you!