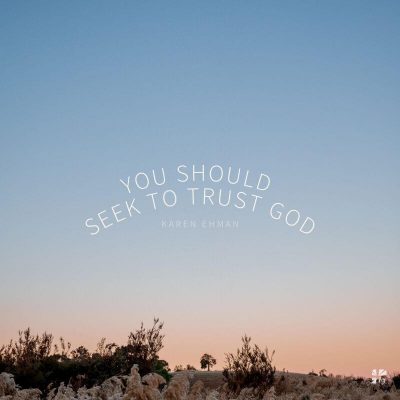 Esther is the scriptural role model for how to control what you should and trust God with what you can’t. And, more importantly, how to decide which is which!

Esther was a stunningly beautiful Jewish orphan who became the replacement for Queen Vashti, the wife of King Xerxes. She had a little help from the man who raised her, her uncle Mordecai, who would become an asset to King Xerxes after saving Xerxes’s life by uncovering an assassination plot. However, Esther’s Semitic heritage wasn’t revealed to the king during the country-wide beauty pageant that was held to select which giddy gal got to wear the queen’s sparkly crown.

Though King Xerxes would come to think Uncle Morty was keen, one of the king’s officials, Haman, loathed him. He had a prejudice against those who were different, and “that Jew Mordecai,” as Haman referred to him, was annoyingly different. You see, Uncle Morty refused to bow down to the narcissistic Haman whenever the official paraded by in all his pomp and circumstance. It enraged Haman. He became so enraged, he cunningly convinced the king to annihilate the entire Jewish population from the face of the earth and then sealed their fate with a stamp of the king’s signet ring.

Mordecai was distraught, but he approached his niece — turned daughter, turned queen — to suggest how she might remedy the tragic situation about to ensue.

It was customary in the king’s court to only be granted an audience when summoned by His Royal Highness. Even his wife Esther couldn’t barge into the hubster’s palace office and declare, “Hey, honey, can I talk to you about something?” Oh no. Doing such a thing didn’t just have the potential of ticking off her spouse; it could cost the queen her very life. And — not that she had it documented in her day planner — Esther realized she hadn’t been called for in more than thirty days. The queen was in a quandary. What was she to do?

Esther gathered her courage, and she also gathered her maid-servants and all the Jewish people of Persia to fast with and for her for three straight days. Then this brave and humble woman approached King Xerxes — gasp — without being called. He miraculously extended his scepter (instead of ordering, “Off with her head!”) and even asked her what it was she wished. He would willingly grant it — up to half of his kingdom.

She asked for a banquet or two (even gals back then loved to throw a good party), and it was as good as done. The first was with her and the Mr. and that third wheel Horrible Haman. After the feast, Haman began building a gallows fit for his enemy Mordecai, who was soon, along with the rest of the Jews, to be toast.

That night the king — suffering from a little insomnia — called, in the wee hours of the morning, for the history books to be opened (since all the Persian drugstores were closed). The account of Mordecai unearthing the terrible assassination plot and saving the king’s life was retold. The king discovered he’d never even thanked the guy. So he asked his palace pal Haman what should be done for someone whom the king wanted to honor. Haman, the self-centered man, thought the king must surely be speaking of him and suggested a little parade through town wearing fine clothes, riding upon a royal horse, with all the townsfolk bowing down to him in adoration.

He nearly expired when Xerxes told him, “Well, then. Go do exactly that for Mordecai.”

At her second banquet, Esther revealed to the king the coming genocide of the Jews, along with the fact that she was one of them.

“Who would order such a thing?” Xerxes demanded to know. When he learned it was Haman, he went out to the palace gardens to let off a little steam. Upon returning, he happened upon Haman and Esther. Haman was lying across the couch on top of the queen, pleading for his life. King X, of course, thought Haman had something X-rated on his mind.

He immediately ordered Haman be hung on the gallows — the ones Haman thought he’d see his enemy Mordecai dangling from — and promptly promoted Uncle Morty to prime minister.

The horrible homicide plan against the Jews was halted, and they were allowed to live and defend themselves from all enemies.

Throughout this whole reality-TV-type drama (the first scene with the gals all lined up hoping to be selected queen, an ancient episode of The Bachelor, perhaps?), Queen Esther remained focused and clear. What can we learn from her that will guide us as we navigate our own life circumstances, whether dire or humdrum? Following are some helpful lessons we can glean from Esther’s life.

Remember God is God and you are not.

When stuck in the muck of less-than-lovely circumstances, our first — and sometimes only — aim is to get ourselves out, and fast. With this line of thinking permeating our action plans, we can readily forget that we are not the ones in charge. Without a proper perspective, we face frustration. We try our level best to modify the circumstances, but we can’t always get people to change their minds to our liking. We can’t shoo away the sickness or ward off the altercation. But we should, like Esther, learn our place. We are human, not deity.

When we even subconsciously think we can control the situation and the outcome but fall short, we may succumb to situational depression. We must remember that God is God and we are not. We must look to Him for our role in the scenario being played out. How should we respond? What should we do? How should we pray? We must not, however, attempt to take his job away from him. That choice never ends well.

Pray, and if you must, fast.

Queen Esther, though a royal family member, didn’t just proceed with the recommended plan; she sought after God. Before leaping into action, she paused. A three-day fast gave her time to draw near to God and sense His assessment of the sticky situation at hand. Should she have decided on her own in a blink and not in a God-bathed response, she might have made a misstep. But because she sought God first, she was infused with His direction and ready to take the right steps that would lead to a resolution of the looming doom.

So pray before you act, and fast from food if God calls you to (check with a medical professional if there are conditions that would make this unwise for you). You may also fast from other things — like talking on the phone (in a gossipy way) about the people involved in the situation, or from the Internet or TV — so you can devote the time to prayer and Bible reading instead.

Esther realized she wasn’t a Lone Ranger believer. She sought help. Her fast was a group effort. Her maidservants joined her.

So did the other Jews in her homeland of Persia. She knew that this challenge she faced required a call out to the troops for backup reinforcement.

Our friends who follow hard after God are invaluable allies. Surround yourself with at least a few — and sometimes a slew — who will thunder Heaven on your behalf, begging God to move. Caution: Don’t just pick a sympathetic friend who will give you an “oh, poor baby” and take your side. Straight shooters are best — those who love you enough to tell you when they sense you’re being selfish or unreasonable. My accountability partner, Mary, has given me a spiritual whoopin’ more than one time, snapping me back to reality and enabling me to make God-glorifying choices.

Do what you can.

Nothing is wrong with action. Sure, look into options and explore the possibility of doing something, but never without taking the spiritual steps already mentioned. If after praying, seeking God, and soliciting wise counsel, you feel some action is needed, it’s okay to move ahead. Esther did. Where you can get yourself (and your emotions) in a tangled-up mess is when you act before you pray. Leap before you look. Cart before the horse in a race to your own coveted finish. Yes, do what you can — prayerfully and carefully — but leave the results to God. Your job is obedience. God’s job is results.

Don’t do what you can’t.

Esther kept her focus and her eyes fixed on her God and not on her circumstances. When your spinning-out-of-control situation permeates your days, it’s easy to let it divert your attention and your eyes off Jesus and allow them to become fixated on the problems at hand. That emphasis is all wrong. As author Mary Southerland, a cyberfriend of mine, said in a recent online Bible study, “Trusting God demands that we learn to fix our gaze on Him and our glance on our circumstances.”

Know when to move and when to stay put.

At times we see Esther moving forward decisively. Other times she idled, taking no evident outward action. In our make-it-happen culture, it feels very foreign to embrace inaction while waiting for God’s timing. That’s why you must walk so closely with the King that you know both when He is calling you to quietly trust as He works behind the scenes and when He is cueing you to make a move. The world screams, “Well, don’t just stand there; do something!” However, sometimes our does-things-differently Creator whispers, “Well, don’t just do something… stand there.”

Whether your life contains life-altering crises, out-of-control circumstances, or relatively normal bumps and blips, you must nestle yourself neatly and surrendered into the spot God has reserved for you in it all.

Instead of longing for God to change the trajectory of your life’s story line, look for His face as you practice your faith at each twist and turn along the way.

No, you can’t change the weather. But you can grab an umbrella.

Lord, may I willingly snuggle up next to you under Your wide umbrella of grace and growth in the everyday mists of life and — even more closely — during those times when it thunders and pours. Amen.

Excerpted with permission from Let It Go by Karen Ehman, copyright Karen Ehman.

Keep your eyes on God in the middle of the hard stuff! Pray and fast for His answers. He will answer! Come share your thoughts on how Queen Esther handled her scary situation and how we can follow her example. We want to hear from you! ~ Devotionals Daily