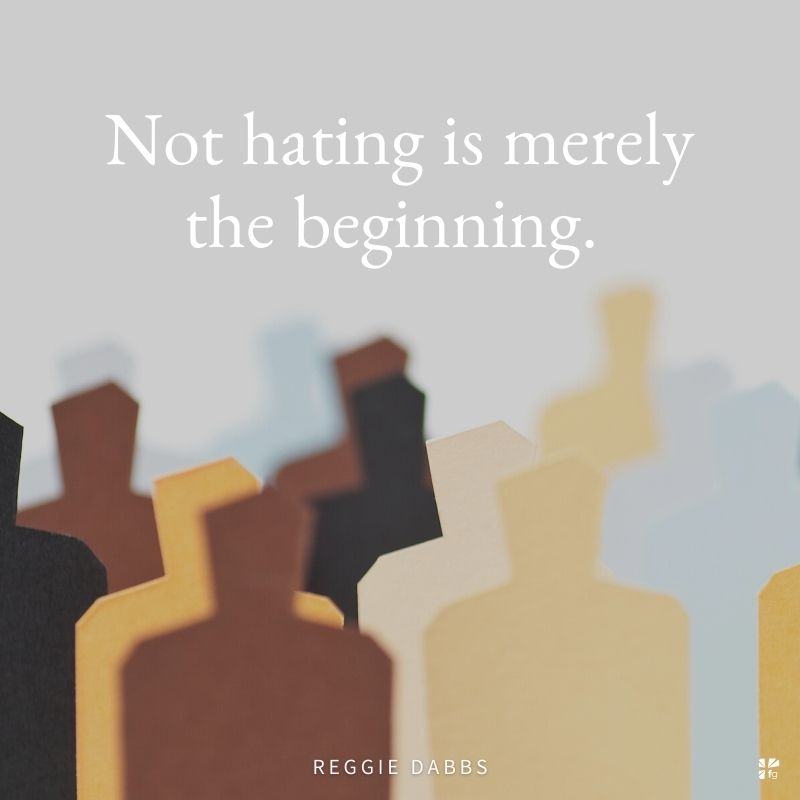 Dad was in his late sixties when I joined the family, so he was fairly old to be fathering another little boy. Sadly, his own parents never got a chance to become old themselves. When Dad was about eight or nine years old, a drunk driver, who happened to be white, ran his parents down and killed them as they were walking home from church one Sunday. The driver never went to jail or faced any consequences, and Dad remembers a policeman saying, “Well, that’s just two less niggers to worry about.”

There was no justice, yet Dad somehow never let bitterness set up inside of him. I once asked him how, after all he had been through, he didn’t hate. How could he keep telling us to never let hate win, to not focus on racism in everything we see, even though it was there? His answer seemed so simple: “Jesus.”

Dad didn’t mean that simply because of Jesus, there was no justification for feeling the pain of racism in his past. The harms inflicted by racism are like all unjust harms; they deserve justice. Walking in forgiveness toward others does not mean ignoring or excusing these harms. It does not free the guilty party from the demand for justice. It does not deny one’s hurt. Forgiving does not mean forgetting. To truly forgive, we must remember. How can we forgive something we don’t recall happening? Forgiving also doesn’t mean trusting someone who hurt us — we can forgive and still maintain healthy boundaries. Neither is forgiveness the same as making amends (owning your wrongdoing), much less experiencing reconciliation (full restoration of a relationship).

My dad walked in forgiveness not because he gave up all demands for justice but because he gave them over. He knew that Jesus suffered the harshest judgment for all the wrongs the human race has ever committed. This means that not only did Christ willingly pay for the wrongs I have committed but also he paid for every wrong committed against me. Everyone can either accept his costly payment for our wrongs by grace or deal with the consequences ourselves. Dad learned that he could forgive those who had hurt him even if they never asked for his forgiveness or sought to make amends.

As a Black man, I have forgiven those who have wronged me, and I want to help other Black people forgive, but not in the falsely prescribed way of acting as if nothing ever happened or that racially motivated wrongs don’t still happen today. I’ve heard many Christians use words like forgiveness and racial reconciliation, but it often sounds less like repentance and more like an excuse to toss off a halfhearted “sorry” so they can just move on.

What I and my Black brothers and sisters are looking for instead is authentic, ongoing biblical healing that comes through honest confession and a courageous ownership of harm so we can love each other better moving forward.

Dad remembered his past, but he wasn’t bitter, and he wasn’t quick to take offense even when he had a right to. One time when he and his old friends were hanging out at the barbershop, an old white man was with them and made a racist comment. The man laughed and said he knew my dad was the one stealing their moonshine, but they could never catch him because “You people are too fast.” I was there at the time — a thirteen-year-old boy in 1976 who was paying close attention to what was being said about my beloved father. Whether Dad actually took the moonshine, I’ll never know, but I know he didn’t seem offended by the man’s slur. I couldn’t understand how he just laughed and moved right past it.

When I asked him about it later, it was apparent that he had not just moved on but moved forward. Instead of stuffing his bitterness and moving on with life, he had allowed God to move him forward, away from bitterness and into a hate-free life not contingent on others’ dealing with their own bitterness. Dad was born in 1911, so he lived during some difficult times in our nation’s racial history. He acknowledged that back in those days, Black people had to be extremely careful where they went, how they spoke, and when and where they were seen by white people.

Dad could tell I wasn’t satisfied with his answer. “I have chosen to teach you not to hate,” he said, “because if I had hated, you wouldn’t be who you have become today. You have a chance to do something I never got to do. I could only survive, but you can change it all.” Looking back, I can see that he was right, but it hurts to think about all the injustices he had to endure over the years. He wasn’t swallowing his offense as self-protection but truly had chosen not to allow such offenses to dominate his attitude or actions.

Dad never denied racism, but he didn’t want it to be a reason for his kids to give up on how far we could go in life. He knew we would be tempted to think that white people were chosen over us — that being Black was a disadvantage.

The truth is, there are disadvantages in being Black, but he knew that if we went down the dark road of bitterness, it would be hard to ever come back.

Now that I’m old enough to address these issues without getting caught up in anger and hate, I can see how focusing on racism could have hardened me when I was younger. Dad was right,

but the time has come for us as a society and as a church to recognize that not hating is merely the beginning.

God wants us to fully believe in and deploy the principles of honesty, confession, and forgiveness to help foster authentic healing and leave behind the cloud of stubbornness and apathy that hangs over our heads.

All Chocolate Is Good

Dad once told me that all people are like chocolate — some are white chocolate and some are dark chocolate, but hey, all chocolate is good. I often quote him when I open a school rally because it always gets a laugh. It also puts people at ease by gently acknowledging America’s elephant in the room: race.

This analogy isn’t just about skin color. All chocolate is good means that not all cops are racists. Not all football players who kneel during the national anthem are unpatriotic. Not all people concerned about racism are radical liberals. Not all white people are bad. Not all Black people are good.

All people have something in them that’s good, but only as a distant echo of our divinely crafted origins as God’s image bearers. We rarely do good things out of good hearts because pure goodness isn’t in there. Even if we have good intentions, there is usually someone we hate — regardless of their flavor of chocolate — even if it’s not about skin color. The liberal. The “woke” ones. The conservative. The social media troll.

Not being enslaved to hate was a gift my dad gave me, but he was just regifting it from God.

This doesn’t mean I don’t get angry when the N-word is occasionally dropped near me on a plane or the countless times I hear it in public schools. I don’t like being pulled over by a police cruiser and searched for no reason when I’m on my way to speak to fifty thousand people at a Christian festival, but it happens. Yes, these things are pretty commonplace in my life — and no, they shouldn’t be.

This is why I feel now is the time to take my dad’s message of being free from hate and put it to work changing hearts and systems. The stakes are high, but it will be impossible to begin addressing the issues if we can’t learn how to get beyond the insult we all feel about racism. Getting beyond the insult does not mean trying really hard to be nice. It does not mean becoming the Christian “tone police” who worry more about hurting feelings than speaking truth.

Feelings may get hurt, but if we are willing to experience those feelings in a spirit of humility, teachability, and devotion to the gospel, hearts and systems can change as we allow our feelings to become catalysts for healing rather than harm. Hearts beat in the chests of individuals, so even though paying attention to their stories and needs won’t be enough to end racism, it is the right place to begin.

The stakes are high. Being like Jesus in a multi-cultural world full of hurt and confusion is challenging and takes humility, patience, and a lot of listening to the Holy Spirit. We can do this through Christ! Come share your thoughts. We want to hear from you! ~ Devotionals Daily