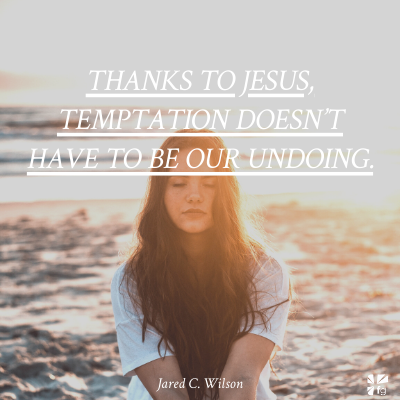 Then Jesus was led up by the Spirit into the wilderness to be tempted by the devil. — Matthew 4:1

After His baptism but before He began His public ministry, Jesus was led into the desert to undergo an attack by Satan. It was a profound testing of Christ’s human nature and a profound blasphemy against His divine nature. And Christ did this primarily for us. To withstand the kind of temptation you and I fall prey to daily, that His perfect obedience might be considered ours through faith, but also to give us a model for withstanding temptation ourselves.

So what do we learn from Christ’s temptation by the devil about our own strategies for overcoming temptation?

One of the biggest problems we face in undergoing temptation is just how passive most of us are. We experience the allure of sin like helpless sheep, dumbly ignorant of the wolf creeping up behind us. But this makes our response to temptation so often reactive. The truth is, we aren’t ignorant to the reality of temptation.

The Bible tells us we have an enemy who wants to destroy us. This shouldn’t make us anxious or fearful, but it should make us alert and on guard.

Eve was taken in by the serpent who is described as the most crafty of all the animals (Genesis 3:1). In the rearview mirror, we can see just how crafy he was — and still is. We can look at Christ’s temptation and see that He was specifically led into the wilderness to face the devil. It is why He was sent there. Jesus knew, going in, that He was going to face the satanic wiles of sin.

We learn an important lesson in this sending. For one, we learn that in this fallen world, temptation is not incidental or accidental. It is the way the devil and his minions work to condemn sinners and demoralize saints. We need to remember when we get up in the morning that temptation is waiting for us.

Don’t let temptation catch you off guard. Be proactive. If you know certain circumstances make you extra vulnerable to particular sins, do what you can to avoid those circumstances. Pray for protection and deliverance, as Jesus Himself taught us in the Lord’s Prayer. Simply being aware of the devil’s ways is a huge advantage in the battle.

It turns out that the devil doesn’t really have any new tricks. He tempts Jesus with basically three things: satisfaction (bread), beauty (all the kingdoms), and pride (commandeering angels). These parallel the threefold temptation of Eve, as well. If you recall, she saw that the forbidden fruit promised to satisfy her hunger, to dazzle her eyes, and to “make her wise.” You and I have been driven ever since to seek satisfaction, beauty, and the pride of self-exaltation ever since.

Like Eve, we get very easily distracted by any shiny thing holding out the promise of meeting these needs. Unlike Eve, Christ withstood these temptations. How? He kept His eyes on the Father’s will.

Similarly, when we take our eyes off Christ, we become susceptible to lesser rivals to his glory. Only Jesus is the Bread of Life and Living Water who can satisfy our spiritual hunger forever. Only Jesus is beautiful enough to be worthy of adoration for all eternity. And only Jesus is worthy of exaltation and worship. When we keep our eyes on Him, we tap into the Spiritual strength we need to see temptation for what it really is — a stupid invitation to engage in a lesser glory that will only bring us pain and misery in the end.

There is a glaring contrast between Eve’s and Jesus’ temptations, and we see it in their different responses to the truth claims of the enemy. The serpent begins his temptation of Eve with the phrase, “Did God really say…?,” basically testing her knowledge of God’s commands. As it turns out, Eve remembers what God has said — at first. But she quickly runs out of ammunition.

Jesus, on the other hand, replies to every one of the devil’s words with words from Scripture. For every bait Satan offers Him, Jesus has an “It is written…” in response. Eve ran out of Bible verses. Jesus did not.

If we plan to overcome the lures of the enemy who wants to devour us, we have to stay in the Word, reading it studiously and prayerfully and constantly. The Word of God is a Spiritual sword, Paul says (Ephesians 6:17), and we will need it to fight off the “plausible arguments” (Colossians 2:4) of the one who hates us. We can resist and rebuke the devil not in our strength, but in the strength of the powerful Word of God.

Thanks to Jesus, temptation doesn’t have to be our undoing.

Until He returns, we will struggle with sin, but we can fight against it and the constant attraction to it we face, if we will cling to Christ’s grace and follow Christ’s example in staying alert, staying focused, and staying in the Word that gives power.

Written for Devotionals Daily by Jared C. Wilson, author of The Gospel According to Satan.

If you are being wooed by temptation, take heart… You’re in good company. Jesus understands the pull of the devil and his schemes. Be wary. Be wise. And fight! Come share your thoughts on how to overcome temptation on our blog. We want to hear from you! ~ Devotionals Daily