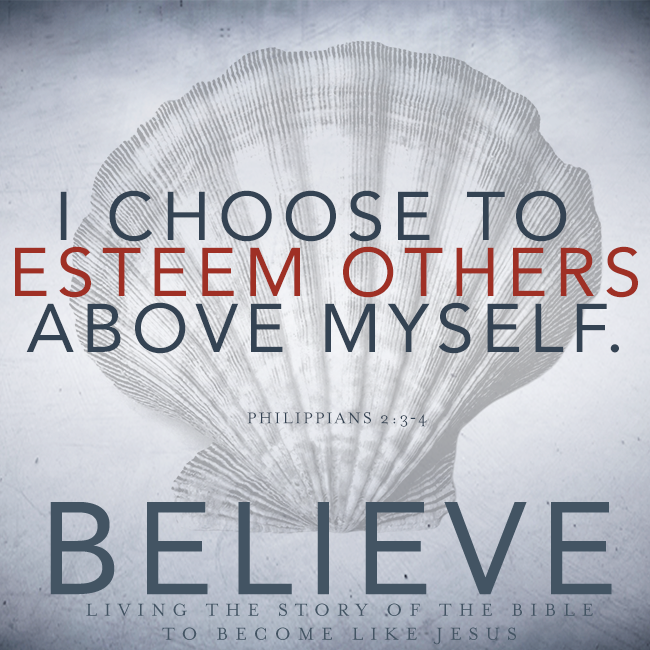 I choose to esteem others above myself.

Do nothing out of selfish ambition or vain conceit. Rather, in humility value others above yourselves, not looking to your own interests but each of you to the interests of the others. – Philippians 2:3-4

Humility is a driving virtue in the Christian life and community. Choosing to esteem others above oneself encourages harmony and love. The opposite of humility is pride. Prideful people typically believe they are better than others. They strive to get their way at the expense of others or boast as a way of boosting low self-esteem. When a person possesses Biblical humility they draw from internal “God-esteem.” They have received God’s unconditional love and embraced their inherent worth as God’s child. From this belief they are capable of lifting others up.

Christ as Our Example

Jesus is our supreme example of humility.

The God of the universe could have ridden into our world on a white horse with a serious entourage and fanfare. Instead he came to us as a baby born in a stable to poor parents.

In those days Caesar Augustus issued a decree that a census should be taken of the entire Roman world. (This was the first census that took place while Quirinius was governor of Syria.) And everyone went to their own town to register.

So Joseph also went up from the town of Nazareth in Galilee to Judea, to Bethlehem the town of David, because he belonged to the house and line of David. He went there to register with Mary, who was pledged to be married to him and was expecting a Child. While they were there, the time came for the baby to be born, and she gave birth to her firstborn, a Son. She wrapped Him in cloths and placed Him in a manger, because there was no guest room available for them.

And there were shepherds living out in the fields nearby, keeping watch over their flocks at night. An angel of the Lord appeared to them, and the glory of the Lord shone around them, and they were terrified. But the angel said to them, “Do not be afraid. I bring you Good News that will cause great joy for all the people. Today in the town of David a Savior has been born to you; He is the Messiah, the Lord. This will be a sign to you: You will find a Baby wrapped in cloths and lying in a manger.”

Suddenly a great company of the heavenly host appeared with the angel, praising

“Glory to God in the highest heaven, and on earth peace to those on whom His favor rests.”

When the angels had left them and gone into heaven, the shepherds said to one another, “Let’s go to Bethlehem and see this thing that has happened, which the Lord has told us about.”

So they hurried off and found Mary and Joseph, and the Baby, who was lying in the manger. When they had seen Him, they spread the word concerning what had been told them about this Child, and all who heard it were amazed at what the shepherds said to them. But Mary treasured up all these things and pondered them in her heart. The shepherds returned, glorifying and praising God for all the things they had heard and seen, which were just as they had been told.  – Luke 2:1-20

As Jesus was coming to the end of His time on earth, He wanted to impress upon His disciples the importance of humility. He does so in an unforgettable way.

It was just before the Passover Festival. Jesus knew that the hour had come for Him to leave this world and go to the Father. Having loved His own who were in the world, He loved them to the end.

The evening meal was in progress, and the devil had already prompted Judas, the son of Simon Iscariot, to betray Jesus. Jesus knew that the Father had put all things under His power, and that He had come from God and was returning to God; so He got up from the meal, took off His outer clothing, and wrapped a towel around His waist. After that, He poured water into a basin and began to wash His disciples’ feet, drying them with the towel that was wrapped around Him.

He came to Simon Peter, who said to Him, “Lord, are you going to wash my feet?”

Jesus replied, “You do not realize now what I am doing, but later you will understand.”

Jesus answered, “Unless I wash you, you have no part with me.”

“Then, Lord,” Simon Peter replied, “not just my feet but my hands and my head as well!”

Jesus answered, “Those who have had a bath need only to wash their feet; their whole body is clean. And you are clean, though not every one of you.” For He knew who was going to betray Him, and that was why He said not every one was clean.

When He had finished washing their feet, He put on His clothes and returned to his place. “Do you understand what I have done for you?” He asked them. “You call me ‘Teacher’ and ‘Lord,’ and rightly so, for that is what I am. Now that I, your Lord and Teacher, have washed your feet, you also should wash one another’s feet. I have set you an example that you should do as I have done for you. Very truly I tell you, no servant is greater than his master, nor is a messenger greater than the one who sent him. Now that you know these things, you will be blessed if you do them.” – John 13:1-17

Following in the steps of His Savior, the apostle Paul wrote a tender letter to the church at Philippi instructing them to practice humility. He cited Jesus as the model.

Therefore if you have any encouragement from being united with Christ, if any comfort from His love, if any common sharing in the Spirit, if any tenderness and compassion, then make my joy complete by being like-minded, having the same love, being one in spirit and of one mind. Do nothing out of selfish ambition or vain conceit. Rather, in humility value others above yourselves, not looking to your own interests but each of you to the interests of the others.

In your relationships with one another, have the same mindset as Christ Jesus:

Who, being in very nature God,

did not consider equality with God

something to be used to His own advantage;

rather, He made Himself nothing

by taking the very nature of a servant,

being made in human likeness.

And being found in appearance as a man,

by becoming obedient to death —

even death on a cross!

Therefore God exalted Him to the highest place

and gave Him the name that is above every name,

that at the name of Jesus

every knee should bow,

in heaven and on earth and under the earth,

and every tongue acknowledge

that Jesus Christ is Lord,

to the glory of God the Father.

as you have always obeyed

— not only in my presence,

but now much more in my absence

— continue to work out your salvation

with fear and trembling,

for it is God who works in you

to will and to act in order to fulfill

Join the conversation on our blog! We’d love to hear from you! ~ Devotionals Daily