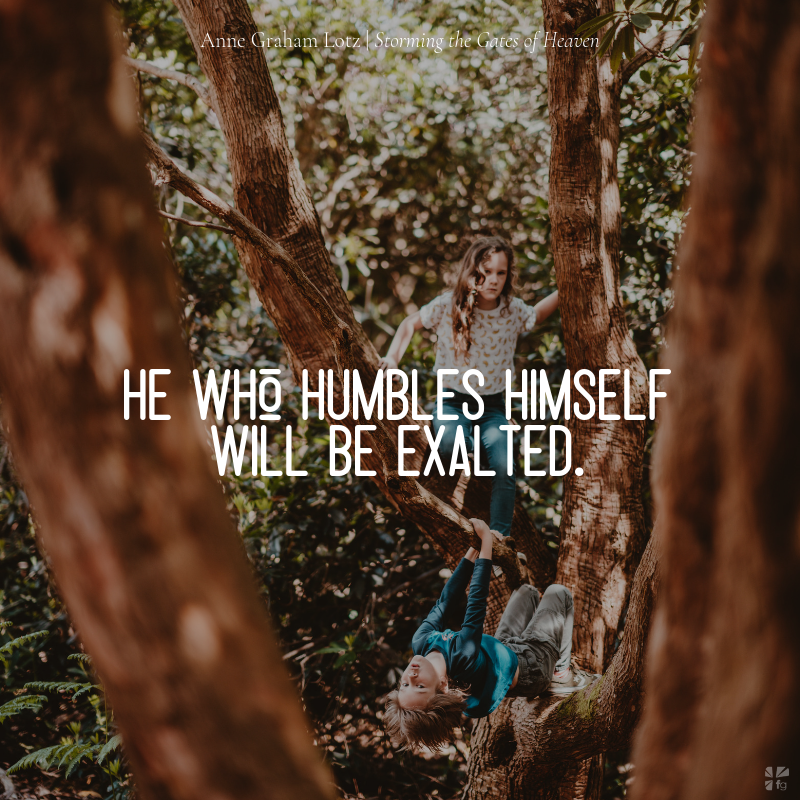 Prayer that storms the gates of Heaven doesn’t have to be fancy or long or filled with Bible verses. In fact, I almost wonder if it needs words at all. It really is a heart’s cry, isn’t it? And one wrapped in complete humility.

Recently, I spoke at a Christian gathering that was multigenerational, multiracial, and multidenominational. Before I spoke, a young pastor walked up to the platform to lead in prayer. With eyes wide open, walking back and forth, gesturing to the congregation, he didn’t miss a beat as he “prayed.”

He was smooth, dynamic, polished, articulate… and proud? I hesitate to say that because only God could see his heart, but he came across as being almost spiritually arrogant. Haughty. In his words, body language, and gestures, he seemed to be performing to impress instead of praying. And he certainly didn’t lead me into God’s presence. In fact, the spirit within me recoiled. His “prayer” reminded me of a story Jesus told to those “who were confident of their own righteousness and looked down on everybody else.” (Luke 18:9)

In His parable, Jesus describes two men who went up to the temple to pray. (The parable is found in Luke 18:9–14.) One was a Pharisee, a highly educated leader in Israel who was so scrupulous in keeping all the nuances, regulations, and traditions of his religion that he was considered exemplary. The other was a tax collector who was considered a low-life because, although a Jew, he collaborated with the occupying Romans for pay.

So Jesus described these two men from God’s perspective. The Pharisee “stood up and prayed about himself,” saying, “God, I thank you that I am not like other men — or even like this tax collector. I fast twice a week and give a tenth of all I get.” By contrast, the tax collector “stood at a distance. He would not even look up to Heaven, but beat his breast and said, ‘God, have mercy on me, a sinner.’”

In the event that someone listening didn’t understand His meaning, Jesus summarized His story,

I tell you that this man [the tax collector], rather than the other [the Pharisee], went home justified before God. For everyone who exalts himself will be humbled, and he who humbles himself will be exalted.

God doesn’t just listen to our words when we pray. He’s not impressed at all with our reputation, who we think we are or who others think we are. He looks on the heart. In case there is any doubt, Proverbs clearly states,

The Lord detests all the proud of heart. — Proverbs 16:5

On the other hand, God confirms,

This is the one I esteem: he who is humble and contrite in spirit, and trembles at My Word. — Isaiah 66:2

He quickly rose through the ranks of officials in Nebuchadnezzar’s court until he was ruler over Babylon. (Daniel 2:48) Daniel held this high position under three more emperors in three successive empires: Belshazzar, who briefly ruled in Babylon; Darius, who destroyed the Babylonians and ushered in the Medo-Persian Empire; and finally Cyrus, who eliminated the Medes and set up the Persian Empire. In anyone’s estimation, Daniel was a very great, important, powerful man.

It was obvious that he was a very great, important, powerful man in Heaven’s estimation too. God revealed to Daniel the dreams of others, as well as what the dreams meant. Angels personally delivered God’s answers to Daniel’s prayers. And God miraculously delivered him when his enemies contrived to feed him to lions. Yet as he began to pray, he smeared himself with “ashes” (Daniel 9:3).

He humbled himself. Because he knew humility matters to God.

It’s interesting how pride can creep into our attitude when we pray, isn’t it? We think if we keep all the “rules” — if we’re good, moral, helpful, thoughtful — then somehow God owes us the answer we want. So after prayer, when our spouse walks out on us, or the doctor diagnoses us with a terminal illness, or a business partner betrays us, then we angrily feel God has somehow let us down.

When Danny and I first got married, we lived in a university town. Every Sunday night, we opened our home to student athletes for fellowship, Bible study, and prayer. Some were on football scholarship, while others were on the basketball and lacrosse teams. In addition we had two cheerleaders. Danny and I loved them all. And they loved us. I would fix a homemade pie or cake, and we would sit around eating the desserts and discussing the Scriptures.

I’ll never forget a football player who came to our home one Sunday night very dejected. He was a huge offensive lineman. His team had played an archrival the day before. They had taken the football all the way down the field in the fourth quarter. The last play was fourth down with less than one yard to the goal line. Needing the six points a touchdown would give them for victory, they went for it.

The tough lineman told us that as they broke the huddle, he had prayed to God, asking His help for them to power the ball over the goal line. But the opposing team held them, and his team lost the game. Between bites of pie, the big football player hung his head and, with a dark look, shared that he felt God had let him down. We all tried to talk him through it, but he never came back to our home. To this day, I grieve over him.

If you are honest, would you say you are like the big lineman? Do you think God has let you down in some way? Could it be that there is pride lurking like a cobweb in the dark inner recesses of your heart? Pride that suggests God owes you something? That you deserve better? That you deserve anything? Maybe it’s time you smeared yourself with ashes.

With a laser-like focus centered on the Lord, Daniel began to plead with God privately, in utmost sincerity, and with deep, genuine humility. And that’s where the prayer that storms Heaven’s gates and claims God’s promises begins…

Humility matters to God. When we humble ourselves we remember who we are and who God is. Today, let’s start our prayers with ‘God, have mercy on me, a sinner’ and see what the Lord does with our contrite hearts. Come share your thoughts with us on our blog. We want to hear from you!