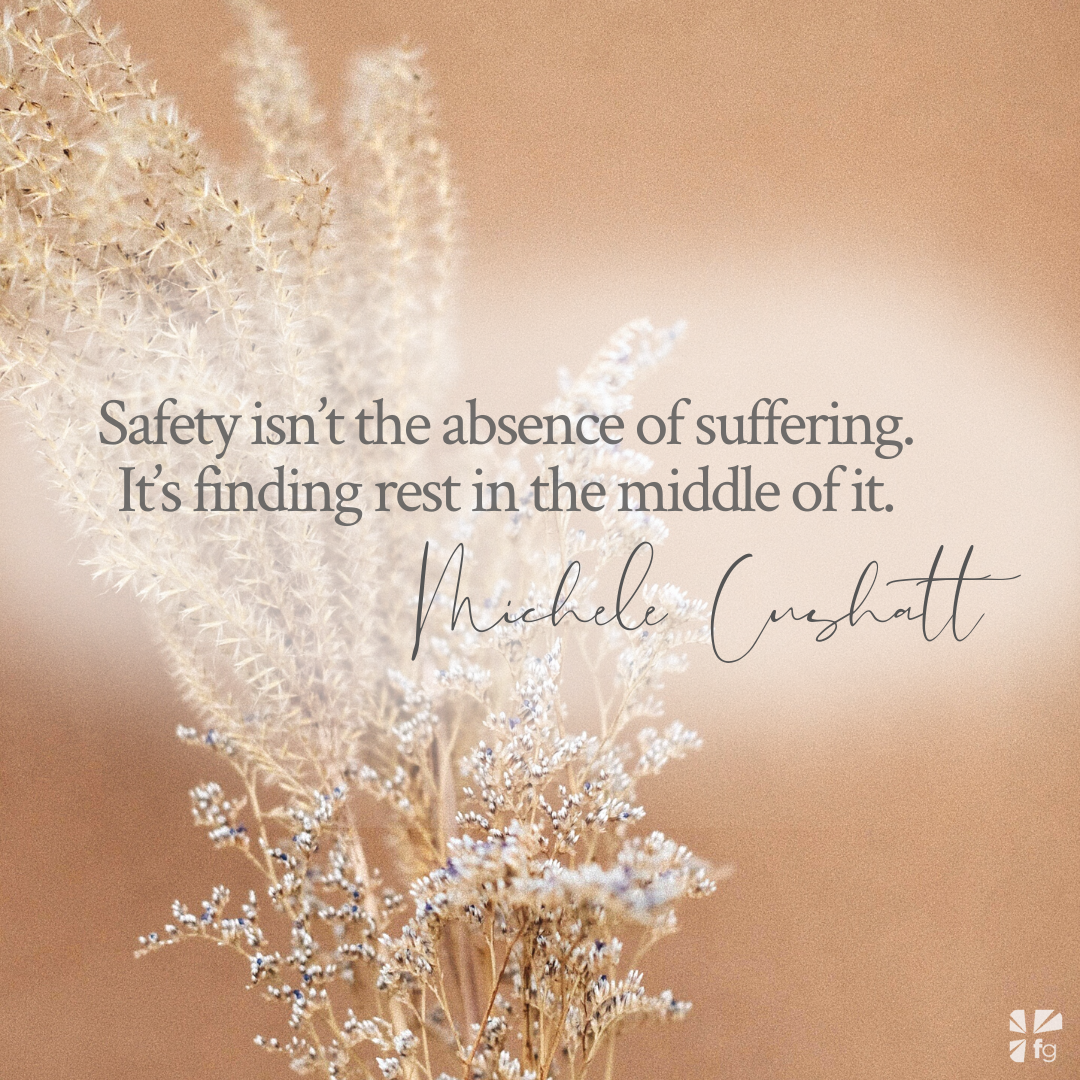 They will live in safety, and no one will make them afraid. — Ezekiel 34:28b

I give them eternal life and they shall never perish; no one will snatch them out of my hand. — John 10:28

By the time he was five years old, my dad had discovered that the world is not safe.

He was the youngest of three children, and his boyhood was traumatic. After his parents divorced, Dad found himself pulled between two dysfunctional homes. In one, alcoholism wreaked havoc. In the other, mental illness and promiscuity. I’ll spare you the details, but trust me, it was nothing a child should ever know.

Somehow he stumbled through grade school and high school and made it to college before spending two years in the army and the Vietnam War. More pain, more trauma.

Until the day his life was spared when it shouldn’t have been. Somewhere outside of Phu Loi, Vietnam, the companies in front of and behind his were ambushed. His unit was spared. Months later he returned home to his young wife with a Bronze Star, physically unscathed. Less than a year later, I was born.

But Dad was never the same. He returned from war a different man, both for good and for bad. War, especially a politically charged one like Vietnam, has a way of tearing at the fabric of a man’s soul. Even so, a small spark of new life had also taken hold. In spite of a lifetime of pain, he believed there had to be a reason he was still alive. So he started searching for its source, for the God his faith-filled grandma had often told him about.

A year later, a coworker invited him to church.

And that’s when God started rebuilding the broken boy turned man. The world still wasn’t safe, Dad knew that. He faced plenty more challenges, as we all do. But he’d found a refuge. A God who had laid down His life to save another’s.

Some of you discovered that the world wasn’t safe early in life, too. Perhaps you had a parent with mental illness. Or maybe a neighbor who took advantage of you. For some it was a teacher who constantly criticized or a foster care system that failed. The possibilities are so varied and painful, I can hardly write them out. Even beyond the acute traumas, ordinary days can be riddled with the unexpected.

Busy streets, sharp objects, threatening strangers. With each passing year, each step closer to adulthood, a child’s fear is confirmed again and again. Danger is everywhere and hardship cannot be avoided.

This life can be dangerous and terrifying.

Psalm 91 gives us a glimpse of the various sufferings we can expect:

That about covers it, don’t you think? Disease. Conflict. Terrorism. Unrelenting fear. Injustice. Death. At morning, midday, and night. Under the cover of darkness or in the bright light of day. Pain will come. Period.

It sounds morbid and overwhelming. And it is. Unless we find the one place of safety even a war can’t crush.

The psalmist knew this, which is why he doesn’t leave us in a pit of despair. Instead, he describes a refuge so secure we can rest in spite of the war.

Whoever dwells in the shelter of the Most High will rest in the shadow of the Almighty. I will say of the Lord, “He is my refuge and my fortress, my God, in whom I trust.” — Psalm 91:12

Several chapters earlier, the writer in Psalm 31:2 said something similar:

Your granite cave a hiding place, your high cliff aerie a place of safety. — MSG

There are seasons, however, when even this comfort doesn’t make me feel better. Bad things happen, pain comes, loss steals life right out of my hand. And I wonder, Where is the safety of God in all this? The truth is I want a life free from pain. I want a marriage that doesn’t ever struggle, children who always behave, a body that stays healthy, and relationships that are easy and uncomplicated. I don’t want storms or wars or conflicts.

But I’m learning something, even as I fight against the fear.

Safety isn’t the absence of suffering. It’s finding rest in the middle of it.

‘In this world you will have trouble. But take heart! I have overcome the world, Jesus said. — John 16:33

Choosing God as your safety doesn’t mean the struggles will cease. The cave doesn’t lessen the intensity of the storm outside. It doesn’t still the thunder or cease the lightning or keep the rain from falling.

The cave provides a place of peace. Even when the storm continues to swirl.

This is what Dad discovered as he fought wars both at home and abroad. No, the world is not a safe place.

Away, then, all fears. The Kingdom is safe in the King’s hands. — Charles Spurgeon, Morning and Evening

What are you most afraid of? Financial insecurity? Illness? The future for a child who struggles? Loneliness in a hard marriage? Death? Whatever terrifies you, name it. Perhaps find an empty journal page and write it down. It’s okay. God already knows. Now picture yourself in a cave, buffered from the elements, safe. This is God’s cave, created for you. Even better, He is with you in it. Savor His presence, this God who sees you, knows you, and promises never to leave you. Tell Him your fears and ask Him to reassure you of His safety regardless of the storm.

Today, we can bring our greatest fears, our deepest struggles with the King who has already overcome. What is it for you? Come share with us on our blog if you feel comfortable and let’s encourage each other to be honest with God about the insecurity and lack of safety we feel in this world in which He promised us troubles. He’s waiting to hear!