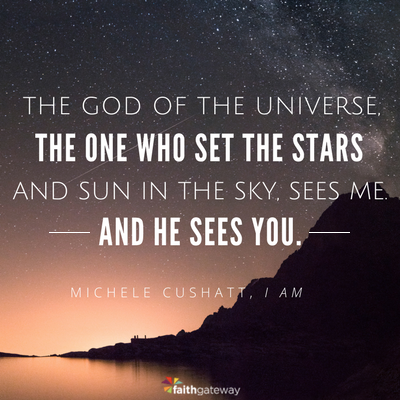 And even the very hairs of your head are all numbered. — Matthew 10:30

He stood well over six feet tall, a towering figure of a man, especially to my petite sixth-grade self. Beyond his height, his every physical detail was — how should I say? — breathtaking. Even at twelve years old, I knew my sixth-grade teacher was no ordinary man. Tanned skin, dark hair, killer smile.

Be still my heart.

It wasn’t so much his handsomeness that drew me to him. Although, hello. Truth is I became a forever Mr. Cantrell fan for a different reason. For the prior five years of grade school, I’d felt invisible. A no-name girl who’d attended three different schools and drifted in and out of classrooms. I did my schoolwork without fanfare, my awkwardness overshadowing any intelligence or personality prepped to bloom. I was an insecure, invisible girl in an Illinois school filled with hundreds of louder, smarter, cuter kids.  But then, sixth grade. And a cute science teacher named Mr. Cantrell. Within the first few weeks of class, during one of his always-entertaining teaching sessions, he simply asked a question. Then, after searching the faces of his students, his eyes and smile landed on me.

“Michele.” I must’ve gaped, because he grinned in response. “Yes, you. What do you think?” I swear he winked at me, as if we shared a secret. That’s all it took. In that moment, with this unremarkable exchange of words, the twelve-year-old me came alive. It was as if he knew I held the answer, believed me capable of great things. As if an electric current had traveled from him to me, I felt alive with his confidence. For the first time in my life, I believed in me. No longer invisible, no longer ignored.

He continued calling me out of hiding for the rest of the school year. With each interaction, I grew more comfortable in my own skin. It’s one of the few school scenes I still vividly recall. Mr. Cantrell ignited a transformation that changed my story. Simply because he chose to see an invisible twelve-year-old girl.

There’s a similar story in the New Testament that has always intrigued me. The details are recorded in both Mark and Luke, although each account spares only a few verses for the story. It’s short enough to make me wonder at its inclusion in the biblical canon at all. And yet there it is. Twice.

It’s the story of the poor widow. Neither account provides her name, relatives, address, or occupation. This we do know: She’d endured great loss. She had little of value left in this life. And she worshiped God.

On that day, Jesus sat in the temple watching worshipers give their offerings. Before she arrived, the wealthy paraded through, making dramatic show of their generous gifts. Imagine them dropping their coins in the offering one at a time.

Or not. Jesus didn’t appear to be the least bit impressed.

Until the widow arrived with two small coins. Mark says her “very small” offering amounted to a few cents, not enough for the temple treasurer to buy more incense or feed an orphan child. Like pennies on the sidewalk, hardly worth the effort to stoop and pick up.

And yet this is what she brought her God. Everything she had. And her God noticed.

Truly I tell you, this poor widow has put more into the treasury than all the others. — Mark 12:43

After a series of far more extravagant displays of giving, Jesus noticed the small and invisible. A poor and ordinary woman in a crowd of the righteous and wealthy.

I’ve long been a fan of the underdog. And at Jesus’ words in this story, everything in me wants to stand and cheer. He sees! Jesus sees her! She matters to Him, both her lack and her love pouring out in a sacrifice most of us will never understand. And if Jesus saw her, then maybe He sees me.

Blessed is the nation whose God is the Lord, the people He chose for His inheritance. From Heaven the Lord looks down and sees all mankind; from His dwelling place He watches all who live on earth. — Psalm 33:12-14

Though the Lord is exalted, He looks kindly on the lowly; though lofty, He sees them from afar. Though I walk in the midst of trouble, You preserve my life.  — Psalm 138:6-7

The God of the universe, the One who set the stars and sun in the sky, the One who knows the workings of every cell of my body and sparks the grand and glorious display of His creation, sees me. And He sees you.

Eventually sixth grade ended and middle school began. I lost track of Mr. Cantrell, and to this day I don’t know where he is or whether he would even remember the awkward, invisible girl from his sixth-grade science class.

But this I do know: I will never outgrow my place in God’s classroom. He’s the most breathtaking person in the room. I’m smitten. And in an ocean of other names and faces, He sees me.

“Let not your heart be troubled,” His tender word I hear, And resting on His goodness, I lose my doubts and fears; Though by the path He leadeth, but one step I may see; His eye is on the sparrow, and I know He watches me. — Civilla D. Martin, “His Eye is on the Sparrow”

In Exodus 4:31, we see the response of the Israelites when they realize God has seen their suffering, seen them. After four hundred years of feeling invisible, they discover that God not only sees them and hears their prayers but also feels deep compassion for them in their grief. So, they fall on the ground and worship. A beautiful response to an incomparable gift. Do you believe God sees you? Your answer just might impact the sweetness of your worship.

Watch the Video: I Am

Do you feel seen in the world? At work or school? In your community? The beautiful thing is that you are seen by the only One who truly matters… Jesus! Come share your thoughts with us on our blog! We want to hear from you! ~ Devotionals Daily