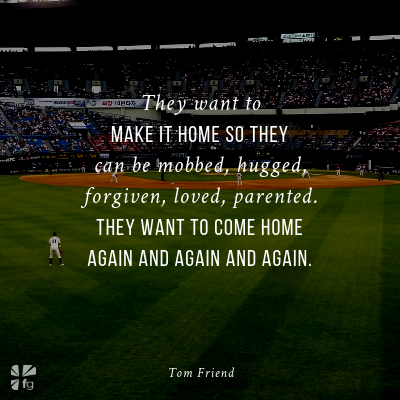 Editor’s note: This week marks the start of baseball’s fall classic, the World Series. This year the LA Dodgers are pitted against the Boston Red Sox for the major league championship. But 21 years ago, it was the Florida Marlins who took home baseball’s biggest crown. And as the winning run crossed the plate for that year’s championship, another story was unfolding behind the scenes…  a story about a man who had faced great tragedy through the loss of his daughter to cancer…  a man who had gone on a difficult journey to renew a faith that he’d lost. And in the very moment the winning run crossed the plate that night, he was given a remarkable gift of hope.

You’ll have to read the book to grasp the full story, but for today… enjoy this excerpt from The Chicken Runs at Midnight: A Daughter’s Message from Heaven that Changed a Father’s Heart and Won a World Series.

No one has ever made it home safely without touching third base. It’s one of life’s absolute certainties. Third base, in the purest sense, is the final pit stop on a glorious and treacherous journey. You may be passing through at warp speed or parking there out of complete necessity, but third base is your ultimate reminder that something grand is near.

The anticipation and anxiety at third are palpable. You are so close to home, and yet so incalculably far away. You don’t want to end up stranded there, which is why you are tempted, at times, to make a run for it. Yet, if you leave hastily or haphazardly, without great thought, you’re outta there—a victim, a goat, a bum.

Third base, on its best day, is the gateway to victory, to euphoria, to understanding, to heaven. But third base will also break your spirit if you let it. People have died there—not in the literal sense, of course. But they’ve died there just the same, whether they are baserunners in extra innings or middle-aged men who have been stopped short of finding peace.

So that’s where it helps to have a third base coach—a partner in crime, a wingman, a sage counselor, an adviser—whose sole purpose is to wave you on home as soon as it is safe or apropos. In other words, a life coach.

This third base coach can give you wings or bad advice. His is a hazardous, thankless, behind-the-scenes existence. No one knows his name or asks for his autograph. His uniform number is irrelevant, and he’ll never gain entry to the Hall of Fame. He doesn’t have a baseball card or even a union card. His only statistic of relevance is how many times he’s let you down. To the general public, he’s a lucky fool when you’re safe and a blind fool when you’re out. Otherwise, they see him for what he is: perfectly invisible.

Once every blue or blood moon, he may earn a pat on the back, usually from the one who hired him: his manager. But when he gets you thrown out, gunned, hosed, or eviscerated at home plate—and trust me, he will—he’s more of a wanted man than you are. You can escape to the dugout, or to your house or car. You can slip a hood over your head and slink away. But a third base coach must stand there without a shield and without earplugs, fair game to be heckled. Fair game to be strung up.

You can bet the third base coach knows his lot in life, knows what’s at stake, knows how consequential it is that you’re standing next to him. Whether you are on third base in the ninth inning or on the third base of life, you are precious cargo, and he is your eyes, ears, and limbs. His job requires the frantic use of his arms (for waving) and of his larynx (for last-ditch verbal instructions). He will assuredly flash you secret signs or coded hand signals at vital moments. He may even go old school, cup his hands, and yell something out to you across the diamond. It’s all for the greater good.

Whatever it takes to guide you home, to deliver you to your safe, tranquil place, the third base coach is all-in. But not many people can handle the stress of the job. It takes cold blood, a sense of time and distance, an expertise in geometry, and an innate sense of how to boss people around. You must be verbose, and you must be subtle. You must be able to operate ten seconds ahead of everyone else on the field, the better to visualize the inevitable play at home plate. You must be able to live with failure and without ego. You must be prepared to be fired.

It is no one’s dream scenario. No one grows up wishing to coach third base; they grow up hoping to round third base and score. Better yet, they hope to score the winning run in the seventh game of the World Series. They want to make it home so they can be mobbed, hugged, forgiven, loved, parented. They want to come home again and again and again.

Of course, there are always exceptions to the rule. There are always a few unique people who are well suited for the position, who genuinely thrive on the opportunity, pressure, intensity, and anonymity that come with coaching third base. There’s even one man who stuttered through a rosary once, praying for the chance to stand on that island, hoping to lose his voice on a nightly basis, just so he could set up shop on the periphery of the playing field—or, more accurately, the periphery of life. Just so he could make a difference in the game and on this planet
somehow, in some unexpected way.

That rare third base coach’s name is Rich Donnelly, and heaven knows—heaven definitely knows—he ended up making a difference, ended up introducing his daughter Amy to the world, ended up saving lives, ended up sending someone near and dear to his heart home.

Dad,
I want to thank you for flying me in for the playoff game the other night. My ears are still ringing from the crowd noise. Mom says having ringing in my ears isn’t such good news, but she just worries about me, you know? I can tell you I’m fine. Don’t you give it a second thought.

Did you see the seats I had—the fifth row!! I had a perfect view of all those runners you waved home. You are really fantastic at your job. Third base coaching is, shall we say, a little busy. Boy, you were yelling a lot! Like I mentioned in the car ride home, I saw you crouching down and cupping your hands over your mouth so the baserunners at second base could hear all of your shouting. That’s why I made the joke I made. Hahaha.

The Chicken Runs at Midnight!

Have there been powerful stories from the world of sports that have inspired you and your faith? We’d love to hear about it in the comments!