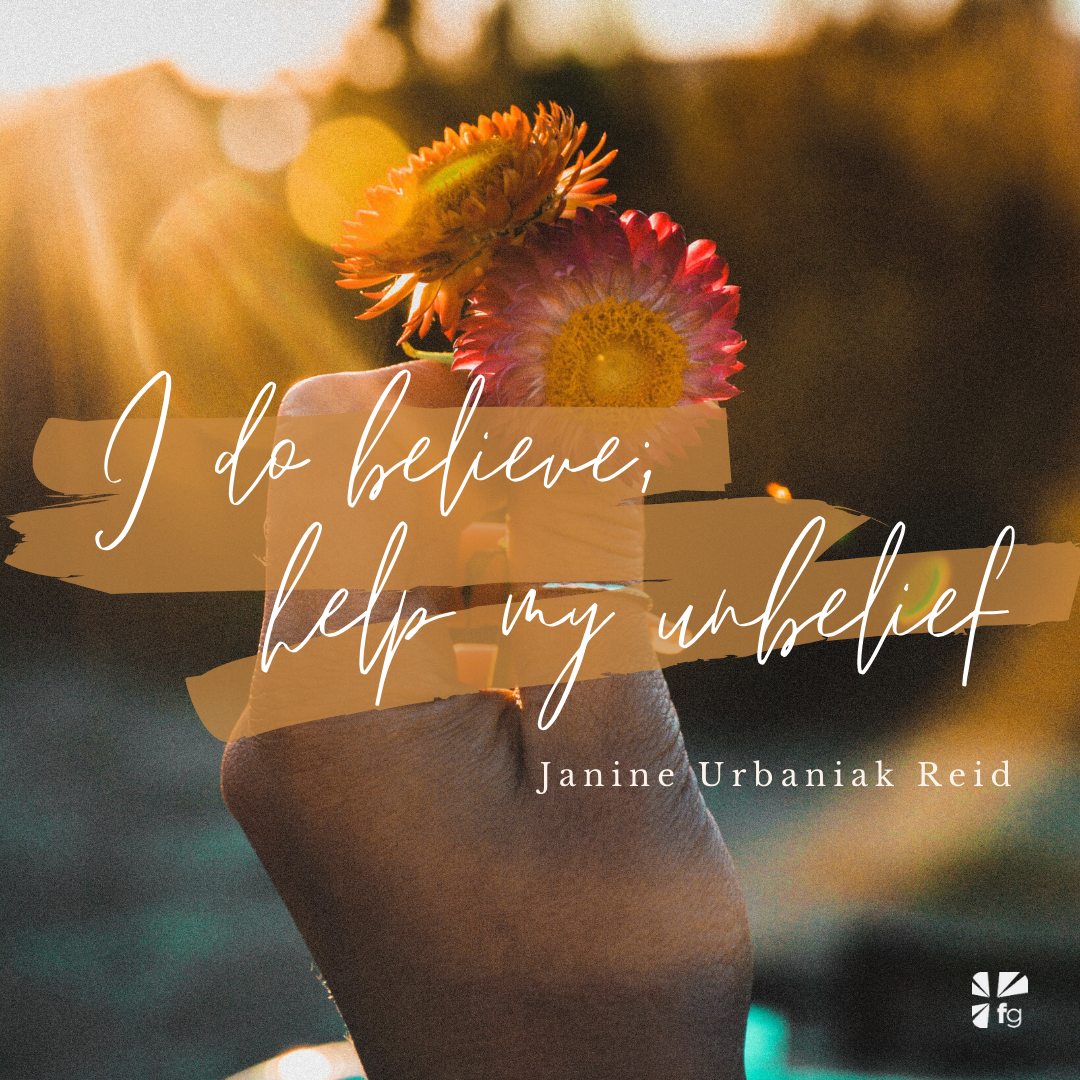 Immediately the boy’s father cried out and said, “I do believe; help my unbelief.” — Mark 9:24

My thirteen-year-old son, Mason, was in the ICU. It wasn’t the first time, but it was definitely the worst. This time he wasn’t waking up. The doctors were keeping him sedated so he could tolerate the breathing tube. The pressure from the massive hemorrhage in his brain tumor might have affected his brain stem which signals the heart to beat and lungs to breathe. I rested my hand on his chest, feeling the inhales and exhales at precise mechanical intervals, which was reassuring, strange, and terrifying all at the same time.

That Friday night my husband was home with our other two children. Pastor Veronica had braved commute traffic to visit. She greeted Mason warmly with the eyes of a mother, no pity, just affection for the friendly boy she’d confirmed just a few months before. We left Mason’s room so we wouldn’t bother the nurses as they were changing shifts and began walking the halls of the empty hospital.

“How are you holding up?” she asked.

Normally I’d want to impress her, making her think I was one of her better congregants, confident in God’s grace. But in this moment I am too tired to pretend to be more spiritually evolved than I am. I can be a spiritual know-it-all. This isn’t about egoism, just the opposite. It comes from needing to prove to everyone, and myself, just how good and worthy I am. It’s also another way to avoid asking for help – even when I really need it. I know! isn’t exactly an opening, even for God. But this day, I told Veronica the truth. I missed my other kids but I couldn’t stand to be away from Mason.  I’d lost count of how many days he’d been in the ICU. It was too long.

“I pray all the time,” I said. “but Mason isn’t getting better.”

I whispered that last part, as if speaking it too loud would make it mean something. No matter how much I pleaded and prayed, nothing changed. Mason’s vital signs spiked irregularly on the bedside monitor.  Another silent afternoon passed sitting beside my still, far away son. My faith felt worn out, threadbare.

“There’s this story in the Bible of a man who brought his son to Jesus for healing. He said, “I believe; help my unbelief.” Veronica said. “Invite God in, right where you are.”

I was trying so hard. I believed that Mason would survive, that this coma-like condition was more of a vacation than a graduation. I tried to protect him with my positive thoughts, but I also heard the concern in friends’ voices. I prayed, but I didn’t feel less afraid.

“You can bring your unbelief to God.” Veronica said kindly.

My unbelief felt like a chasm, a pit whirling with gravity, pulling me toward the unimaginable. I was afraid to surrender to whatever came next — in case that meant my son might not wake up. I was hanging on so tightly not just for me, but for Mason. I had to believe for both of us. But my muscles ached and quivered. I was afraid to let go because where would I fall?

Like other mothers, I just want my kids to be okay. And it’s reassuring to have a plan. But what happens when normal morphs into something unrecognizable? My unbelief tells me I’m not strong enough. I can’t imagine a path forward with my finite human mind. But this is where infinite God comes in.

“I believe, help my unbelief,” became my mantra. Weeks passed. Mason eventually woke up. I suppose I did too.

I don’t have perfect faith, but neither did the father in the story. Two verses back he asks Jesus if he can help his son. I can see Jesus raise an eyebrow (that precise arch he got from Mary) as he responds. “If you can believe, all things are possible to him who believes.” That’s when the father utters those words — the path forward — a truth so profound it still registers two thousand years later, “Help my unbelief.” He didn’t pretend or try harder. The depth of his love is apparent in his surrender. Please, help.

I brace against the unknown and uncertain. My unbelief is as much a part of me as my belief, but God can work with this. I just need to ask for help, again and again. My reflex is to control and fix, attempting to force problems into solutions that fit my human brain. Problems arise when I’m so distracted fighting against what is that I don’t notice the grace that’s being revealed in that very moment.

Prayer isn’t about controlling my circumstances. It’s about accessing the strength and love I need to get through anything. Thinking back to that time when our lives jumped off the track of so-called normal and predictable, I gripped so tightly because I was holding out for a miracle I could recognize. Mason is twenty-two now. He is funny and wise. He still struggles, and I do too. Some days feel too long and too hard. I fear I’m not up for the task, but that doesn’t matter. All I have to do is invite God in, and gently open my hands to offer both my belief and my doubt.

I believe (l can accept and work with what is; God is here); help my unbelief (my resistance to what is; doubt regarding my ability to access God’s ever-present strength and love).

Written for Devotionals Daily by Janine Reid, author of The Opposite of Certainty.

You can bring your unbelief to God. He can work with threadbare faith, exhaustion, aching muscles, and quivering hope. Jesus is the place to go with your fears, doubts, and desperate prayers. Come share your thoughts with us on our blog. We want to hear from you! ~ Devotionals Daily