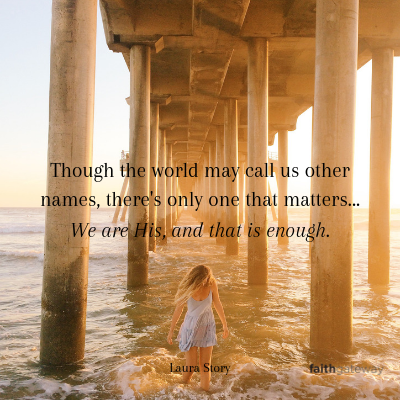 I’ve spent the better part of this year learning to give up. Yes, you heard me correctly. I am learning to give up. Honestly, this was not a journey I was taken on willingly. Who wants to give up? There are no great war stories about the guy that gave up, and I bet none of you reading this have ever sat on the sidelines of your child’s sporting event, yelling, “Miss that shot! Let the other team score one this time!” Giving up, surrendering, letting go… every one of these terms has a negative connotation. Who in their right mind would want to give up?!

Yet there I was, sitting with the OB ultrasound tech for my standard 38 week checkup. It was a pretty routine visit. Since this was our fourth child, there was a bit of a “Been there. Done that” feel, up till the moment she said those words that no mom every wants to hear: possible complication. Within minutes, the doctor was called in and a team of medical professionals confirmed that our son Timothy would be born with cleft lip. Now don’t get me wrong. I know there are a thousand worse things Timothy could have been born with and I am so grateful for how minor and treatable his condition was. But when you are sitting in that pale white office hearing about the facial deformity your child will be born with and the surgery he will need as a 10-week-old, it is a startling reminder that I was not in control. Of my pregnancy. Of the wellness of my child. Of my future. Of anything. “So, what can I do now?”, I asked the sweet nurse practitioner who was offering me a steady supply of tissues. “Nothing,” she responded. And on some level, she was right. There was nothing I could do. But on another level, there was something I could do. Something I needed to do.

I needed to give up.

Watch the Video: I Give Up announcement

There was a woman in the Bible who also had a health condition. The disciples referred to her as “the bleeding woman”, which I think is quite an unfortunate title. But this was who she was. She had lived with an incurable hemorrhage for 12 years and every remedy she sought left her worse off physically and destitute financially. So imagine her life: ceremonially unclean in her culture, impoverished, lonely and almost hopeless. I say almost, because on that fateful day, she heard that Jesus was passing through her town. So, breaking every rule and social norm, she pushed through the crowd and grabbed onto the hem of His garment. And immediately she was healed. Not only did she receive healing, Jesus would not rest till she identified herself.

“Who touched me?” He insisted.

The Scriptures say she fessed up, telling him her whole story. And his response?

Take heart, daughter. Your faith has made you well. — Matthew 9:22

And in a moment, she was no longer the bleeding woman but a highly treasured daughter of the King.

When we reflect on what made this woman well, it wasn’t her years of efforts, her accumulated resources or her social status.  It was her faith. Her faith made her well. But what exactly does this mean? And for men and woman like ourselves who also struggle with incurable sickness and insurmountable circumstances, what does it look like for us to have this kind of faith?

I believe there are two aspects of this woman’s faith that led to her healing. First, she knew that He could. She knew enough about Jesus to know that her best chance at freedom from her hopeless situation was to get to Him. Maybe she had heard stories of miracles He had performed in other towns. Maybe she knew His claims to be God’s Son and had grown up hearing about God working on behalf of His people throughout history. Either way, her faith began with a strong belief that God can. But that is not the only aspect of faith that this woman displayed.

She also knew that she could not. This woman was about as rock bottom as any person could get. She was done pretending that she could fix her own problems. She was done looking to remedies, self-help books or making deals with God. Yes, her faith attested to Jesus’s ability, but it began with an admission of her own inability. Basically, she had to give up.

As we consider this extraordinary story, two closing thoughts come to mind. First, what label do you wear? I often get the privilege of teaching and singing at conferences. Each night, as the attendees pour into the meeting space with their nicely printed name tags, I often wonder what they would say if they were really honest. Like the bleeding woman, what name would these men and women say defines them? Disabled? Divorced? Womanizer? Addict? Anxious? Simply not enough? Yet when we have an encounter with Jesus, all these labels are torn to pieces. He looks at us and calls us sons and daughters. Though the world may call us other names, this is the only name that counts.

We are His, and that is enough.

Secondly, when we consider what made this lovely daughter well, it was believing that He can and admitting we cannot. In what area of your life do you need to stop trying and just give up? What possession, relationship, past sin or future insecurity do you need to let go and trust God with? I cannot promise that God will heal you instantly or that your problem will disappear but there is a deeper healing that happens in our hearts when we learn to trust Him enough to simply let go, to simply say, “I give up”.

On March 20, 2018, our family welcomed Timothy William into the world and he had the biggest and most beautiful cleft lip smile we had ever seen. And we were immediately in love! Even post-surgery, his smile brings tears to my eyes, and not just because my heart is so full of love for him. His smile always reminds me that I don’t have to be in control of everything, and I don’t have to always know how it’s all going to turn out. I don’t have to know, because I know the One who does, and I will continue, each day, to put my faith in Him. And day by day, I will learn to give up.

Written for Devotionals Daily by Laura Story, author of I Give Up.

Watch the Video: I Give Up official music video

He can. We cannot. As children of the most high God, we have to admit that the Lord is perfectly in control and we are not. What do you need to give up on today? What do you need to place into His hands? Come share with us on our blog. We want to hear from you! ~ Laurie McClure, Faith.full