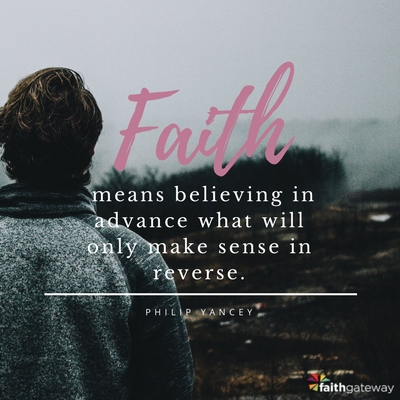 It does not help to try to quantify suffering, I have learned along the way. That the tsunami of 2004 killed far more people than the tsunami of 2011 or that more students died at Virginia Tech than at Sandy Hook Elementary School does not make one event more tragic than the other. Likewise, to the person with a migraine headache or chronic fatigue syndrome, it does not help to point to someone with a worse condition, say, AIDS or the Ebola virus. All suffering is suffering. As C. S. Lewis said, there is no such thing as “the sum of the world’s suffering,” an abstraction of the philosophers. There are simply individual people who hurt. And who wonder why God permits it.

We experience suffering alone — it “islands” us — and for the people involved, scale doesn’t matter so much.

Even a mega-disaster like the tsunami zooms in personally: a child swept away from a kindergarten playground, a family business destroyed in an instant, a teenager terrified by the aftershocks that hit weekly, everyone frightened by the invisible threat of radiation.

Theologian Hart goes on to note a secret irony hidden in the arguments of the skeptics: “They would never have occurred to consciences that had not in some profound way been shaped by the moral universe of a Christian culture.” The most strident voices pounce on a mass tragedy as if it puts a final nail in the coffin of belief:

How could a good God possibly allow such a calamity?

Though the question is unavoidable, and a profound mystery, it applies only in the context of religious faith. I have yet to hear critics offer a response consistent with their own beliefs: Why are you shocked and upset? What else should we expect from an impersonal universe of random indifference?

Actually, the Bible presents more potent objections than those of the skeptics. When speaking at universities I sometimes challenge my audience to find an argument against God — whether in the classical atheists Voltaire, Bertrand Russell, and David Hume, or in contemporary ones such as Richard Dawkins, Sam Harris, and the late Christopher Hitchens — not articulated in biblical books. “You are free to reject God and the way this world runs,” I tell students tempted to do just that; “I, for one, respect a God who not only gives us the freedom to reject Him, even to crucify His Son, but also includes the words of rejection in our Scriptures.”

Let me give a brief sampler:

The writer Anne Lamott applauds this vein of protest.

My belief is that when you’re telling the truth, you’re close to God. If you say to God, “I am exhausted and depressed beyond words, and I don’t like You at all right now, and I recoil from most people who believe in You,” that might be the most honest thing you’ve ever said. If you told me you had said to God, “It is all hopeless, and I don’t have a clue if You exist, but I could use a hand,” it would almost bring tears to my eyes, tears of pride in you, for the courage it takes to get real — really real. It would make me want to sit next to you at the dinner table.

How does the Bible answer such laments? Usually with silence. Job, that unfortunate man who deserved suffering least yet endured it most, finally got his requested audience with God, who responded with his longest recorded speech. Oddly, though, while giving Job a tour of the natural world in magnificent poetry, God never addressed the Why? question. In Frederick Buechner’s words, “God doesn’t explain. He explodes. He asks Job who he thinks he is anyway. He says that to try to explain the kind of things Job wants explained would be like trying to explain Einstein to a littleneck clam…. God doesn’t reveal His grand design. He reveals Himself.” Then, in a delicious irony, God pronounces that only through Job’s advocacy will he listen to the friends who had badgered Job with their condemnatory theology. They had begun well, “sitting shiva” with Job for seven days of silence; the problems began when they opened their mouths.

I have often wondered why the Bible gives no systematic explanation for the problem of suffering.

The prophets had a cause-and-effect view of why Israel suffered, but they delivered their warnings well in advance and always with a promised remedy if the nation changed its ways. Jesus brushed aside questions of cause, except to refute the Pharisees’ and disciples’ airtight theories of suffering-as-punishment. Most biblical authors, it seems, did not sit around scratching their heads over the question “Why do bad things happen to good people?” They viewed this world as enemy territory, a spoiled planet ruled by the father of lies, the wizard of woe. What else should we expect from Satan’s lair? When the prince of this world offered a tempting shortcut solution to earth’s problems, Jesus did not scoff at his presumption of authority; he simply chose against it, in favor of a slower, more costly yet permanent solution.

Japanese Buddhists who take their faith seriously — and only a minority do — anticipate a time when the souls of those who die will lose their identity and merge with the oneness of the universe. Secular unbelievers resign themselves to the extinction of the planet millions of years from now when the sun flames out like a dying match. In contrast, Christians place their hope in a time when death, “the last enemy,” will be destroyed, when God will sort out evil from good and death from life, and resurrect both bodies and souls in a final resolution: “I am making everything new.”

I attended the funeral of a child in Chicago in which the pastor shocked the mourners by glancing down at the coffin and interrupting his eulogy with the sudden exclamation, “Damn you, death!” Catching himself, he quickly added, “Not God — it’s death I’m damning. And God too has promised to damn it.”

We live on a fallen planet, say the theologians. Anyone who doubts that should visit Japan. I have read reports from the seismologists who expected “the big one” to hit not forty-five miles off the coast of Tohoku but farther south near Tokyo, which would have caused far more damage. As it was, the earthquake hit with such force that it caused the earth to shift on its axis, reducing daylight by a few microseconds, upsetting GPS monitoring stations around the world, and releasing six hundred million times the energy of the atomic bombs that fell on Japan in 1945.

The tectonic forces that proved so destructive in 2011, however, are the same ones that formed the islands of Japan in the first place. The hurricanes and cyclones that wreak such havoc are essential to the weather systems that spread moisture across the globe. Seen through any lens, natural or theological, this world is “in process” — flawed, incomplete, imperfect.

Ever since Adam we humans have been assigned the tasks of stewardship: growing gardens among thorns and thistles, tending the animals, building civilizations. As a species of sub-creators made in God’s image, we are charged with bringing order out of chaos. We have made giant strides: until two centuries ago half of all children died before the age of five and the life span of adults averaged thirty-five years. We have tamed rivers, made the sky our highway, devised ways to stay warm in winter and cool in summer, and knit the world together in an electronic web.

Admittedly, these advances have come with a cost: diminishing resources and increased population, pollution and its effect on the climate, injustices that allow some to live in comfort at the expense of others. History marches on, and all this time God has “sat on His hands” charge the critics. God did not intervene when European powers carved up continents and the New World imported millions of slaves, or when Nazis tried to exterminate the “chosen people” in the most notorious of numerous attempts at genocide. For whatever reason, God has chosen to let history take its course.

Why? We have no more definitive answer than Job got. We have only the stubborn hope — so different from naive optimism — that the story of Jesus, which includes both death and resurrection, gives a bright clue to what God will do for the entire planet. Optimism promises that things will gradually improve; Christian hope promises that creation will be transformed. Until then, God evidently prefers not to intervene in every instance of evil or natural disaster, no matter how grievous. Rather, God has commissioned us as agents of intervention in the midst of a hostile and broken world.

“It is for your good that I am going away,” Jesus told the mystified disciples in a final act of delegation, giving us the pattern to follow. “I will not speak with you much longer, for the prince of this world is coming. He has no hold on Me, but the world must learn that I love the Father and that I do exactly what My Father has commanded me.” Then Jesus went out to face a long night of suffering, which He had prayed fervently against and yet would decline to use His power to prevent.

Creation has been groaning “as in the pains of childbirth,” Paul told the Romans, harboring no illusions about the state of our planet. Our only hope is radical intervention, that one day “the creation itself will be liberated” in a sort of cosmic rebirth. Until then, no answer to suffering will satisfy, even if we had the capacity to comprehend the answer. Like Job, we can only attend to the small picture, clinging to belief against all contrary evidence while trusting God with the big picture. Faith, I’ve concluded, means believing in advance what will only make sense in reverse.

Excerpted with permission from The Question That Never Goes Away by Philip Yancey, copyright Philip Yancey and SCCT.

How do you approach God in suffering with the question that never goes away, “Why?” Are you honest with Him, afraid of Him, bitter at Him, hurt but believing in Him? Come share your thoughts with us on our blog. We would love to hear from you! ~ Devotionals Daily