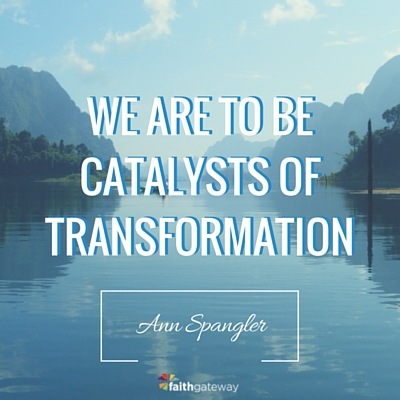 Bear with each other and forgive one another if any of you has a grievance against someone. Forgive as the Lord forgave you. – Colossians 3:13

John Paul Lederach has spent most of his life pursuing peace in some of the most troubled regions of the world — Somalia, Columbia, Nepal, and Northern Ireland, to name a few. Central to any effort at peacemaking, he says, is the ability to imagine yourself in a relationship with your enemy.

But how does one begin to imagine such a thing, particularly if the offense has been grievous? It’s one thing to imagine a relationship with a colleague who has bad-mouthed you in front of the boss, but quite another to imagine a relationship with an abusive ex-spouse. It may seem too painful and far too risky. Failing to do so, however, might be even riskier, because it places your heart in jeopardy of being destroyed by anger, bitterness, and depression.

One would be tempted to think so if it weren’t for the words of Jesus instructing His followers to take the outrageous step of offering their cheek for yet another slap. He told them to love their enemies, to bless those who curse them.

As always, we are tempted to dismiss Christ’s teaching as being too hard or impractical for ordinary people to follow. It may even sound naïve. But Jesus prevents us from ignoring Him by following His own advice — and following it all the way to the cross. More than any other figure in history, Jesus was able to envision a relationship with the enemy. It was precisely this ability that made His death possible.

Paul reminds the Colossians of this by saying,

Once you were alienated from God and were enemies in your minds because of your evil behavior. But now He has reconciled you by Christ’s physical body through death to present you holy in His sight, without blemish and free from accusation. – Colossians 1:21-22

According to Paul, God started this whole business by believing that His enemies could become transformed into His friends. Listen to how he instructs believers in Rome:

Very rarely will anyone die for a righteous person, though for a good person someone might possibly dare to die. But God demonstrates His own love for us in this: While we were still sinners, Christ died for us. – Romans 5:7-8

As Christ’s followers, we are to be catalysts of transformation, keeping the cycle going by imitating Jesus in our own most difficult relationships.

In some cases, envisioning a relationship with an enemy may involve having some measure of contact with the offender. This was what happened when Pope John Paul II met with Mehmet Ali Agca in an Italian prison in order to forgive him for attempting to assassinate him. It also happens when our enemy is someone we can’t avoid, like a neighbor or a colleague. In other cases, it may be dangerous and foolish to have further contact, as in the case of a woman and her attacker.

What then is required? Something still painfully difficult — as victims of another’s sin, we must at least imagine the possibility of forgiveness and reconciliation. To do so requires not that we drop our demand for justice, but that we repudiate our desire for vengeance. In such cases, our relationship with our enemies will primarily consist of praying for them, asking God to bless and transform them, and forgiving them from the heart whether or not they are repentant.

As soon as you started reading about Christ’s example of forgiveness, what event or person or group came to your mind? We all know what area or issue of unforgiveness we are hanging onto because it’s exactly where we are stuck in anger, bitterness, resentment, or depression. Are you stuck? Ask the Lord to help you at least imagine the possibility of forgiveness and reconciliation. And, come join the conversation on our blog! We would love to hear from you about reimagining our enemies! ~ Devotionals Daily