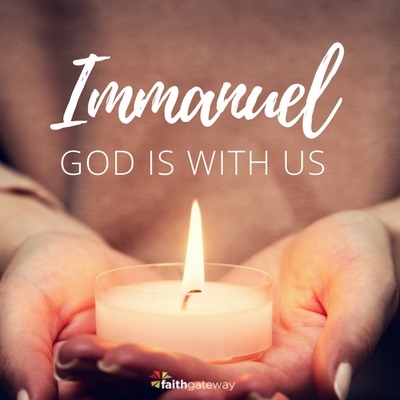 The name Immanuel appears twice in the Hebrew Scriptures and once in the New Testament. In Greek, it is rendered Emmanouel. One of the most comforting of all the names and titles of Jesus, it is literally translated with us is God or, as Matthew’s Gospel puts it, God with us. When our sins made it impossible for us to come to Him, God took the outrageous step of coming to us, of making Himself susceptible to sorrow, familiar with temptation, and vulnerable to sin’s disruptive power, in order to cancel its claim.

In Jesus we see how extreme God’s love is.

Remember this the next time you feel discouraged, abandoned, or too timid to undertake some new endeavor. For Jesus is still Immanuel — He is still God with us.

Then Isaiah said, “Hear now, you house of David! Is it not enough to try the patience of human beings? Will you try the patience of my God also? Therefore the Lord Himself will give you a sign: The virgin will conceive and give birth to a Son, and will call Him Immanuel.” — Isaiah 7:13–14

All this took place to fulfill what the Lord had said through the prophet: “The virgin will conceive and give birth to a son, and they will call Him Immanuel” (which means “God with us”). — Matthew 1:22–23

This is how the birth of Jesus Christ came about: His mother Mary was pledged to be married to Joseph, but before they came together, she was found to be with child through the Holy Spirit. Because Joseph her husband was a righteous man and did not want to expose her to public disgrace, he had in mind to divorce her quietly.

But after he had considered this, an angel of the Lord appeared to him in a dream and said,

Joseph son of David, do not be afraid to take Mary home as your wife, because what is conceived in her is from the Holy Spirit. She will give birth to a Son, and you are to give Him the name Jesus, because He will save His people from their sins.

All this took place to fulfill what the Lord had said through the prophet:

The virgin will be with child and will give birth to a Son, and they will call Him “Immanuel” — which means, “God with us.”

Immanuel, I praise You for Your faithful love — drawing near when I was far from You. Instead of casting me away from Your presence, You came to call me home. Instead of punishing me for my sins, You came to free me from them. Immanuel, my God, You are here with me today. Live in me and glorify Your Name, I pray.

The name Immanuel (im-ma-nu-AIL) first appears in Isaiah 7:14 as part of a prophetic word that Isaiah spoke to King Ahaz of Judah (the southern kingdom) at a time when Syria and Israel (the northern kingdom) had formed a coalition against Assyria, the region’s greatest power. They wanted Judah to join their uprising. The prophet Isaiah counseled Ahaz to trust in the Lord rather than to appeal to Assyria for help against Syria and Israel, who were threatening to invade Judah for refusing to join them. Then he invited Ahaz to ask the Lord for a sign to confirm the prophetic word, but the unfaithful king refused, having already decided to place his trust not in the Lord but in Assyria.

In response to Ahaz’s refusal to trust God, Isaiah proclaimed:

Hear now, you house of David! Is it not enough to try the patience of human beings? Will you try the patience of my God also? Therefore the Lord himself will give you a sign: The virgin will be with child and give birth to a Son, and will call Him Immanuel. — Isaiah 7:13-14

Shortly after that Syria and Israel were soundly defeated, exactly as Isaiah had prophesied. Many years later the southern kingdom of Judah was destroyed by Babylon, its people taken captive.

Matthew’s Gospel recalls Isaiah’s prophecy, applying it to the child who would be born of Mary, the virgin betrothed to Joseph. The sign given hundreds of years earlier to an apostate king was meant for all God’s people.

In fact the Bible is nothing if not the story of God’s persistent desire to dwell with His people.

In Jesus, God would succeed in a unique way, becoming a man in order to save the world not from the outside, but from the inside. Immanuel, God with us, to rescue, redeem, and restore our relationship with Him.

Reflecting on the Name

How have you experienced Immanuel — God being with you, in your life thus far? Matthew begins and ends his Gospel (see Matthew 28:20) with the promises that God is with us. How would your life be different if you began and ended each day with the firm belief that God is with you? What does this title of Jesus reveal about His nature?

Join the conversation on our blog! We would love to hear from you! ~ Devotionals Daily 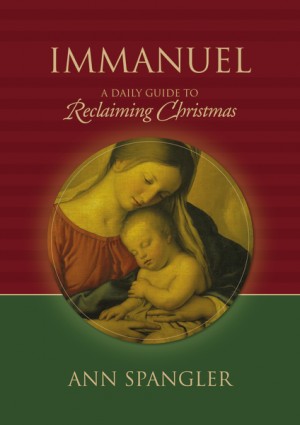