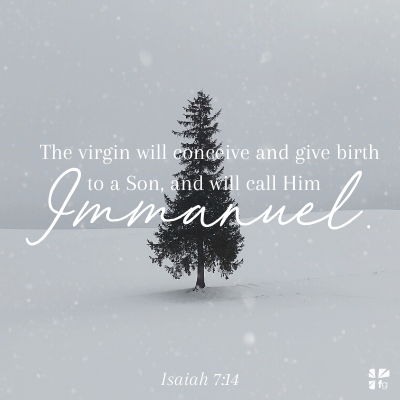 Then Isaiah said, “Hear now, you house of David! Is it not enough to try the patience of humans? Will you try the patience of my God also? Therefore the Lord Himself will give you a sign: The virgin will conceive and give birth to a Son, and will call Him Immanuel. He will be eating curds and honey when he knows enough to reject the wrong and choose the right, for before the boy knows enough to reject the wrong and choose the right, the land of the two kings you dread will be laid waste. The LORD will bring on you and on your people and on the house of your father a time unlike any since Ephraim broke away from Judah — He will bring the king of Assyria.” — Isaiah 7:13-17

As is true for many prophecies, here Isaiah portrays two coming events. First, during Ahaz’s day, a child would be born who would witness the destruction of Judah’s two prominent enemies — Israel and Aram. The word translated in English Bibles as virgin (‘almah) is used to refer to an unmarried woman who is young (Genesis 24:43; Proverbs 30:19). Some believe this is a prophecy that a child will be born to a young woman from the house of Ahaz who will marry and give birth to this promised son. Other writers feel that Isaiah’s prophecy concerns a young woman who would become Isaiah’s wife following the death of his first wife after she gave birth to Shear-Jashub (Isaiah 7:3). In that case, the initial fulfillment of this prophecy is found in Isaiah 8:3. Regardless of the exact nature of this promised son, he would grow up during a time when God would crush the surrounding nations and fulfill His good promises to His people.

The second application of this prophecy was fulfilled by the coming of Jesus Christ, whose name Immanuel, means “God with us.” Born to a young virgin, Jesus was the promised Messiah of which all Old Testament deliverers ultimately foreshadow. What Ahaz lacked in vision and purpose, Jesus had — and more.

He was the incarnate Son of God, miraculously born of a virgin and with a mission to fulfill God’s plan to save His people. Jesus would be the perfect King who would rule from a position of humility and grace, not tyranny and self-aggrandizement.

Through God’s miraculous provision, the coming Messiah would take on human flesh while retaining His full divinity.

This promised Son would do far more than the son would accomplish or represent in Isaiah’s day.

Jesus would crush Satan, sin and death through His sacrificial death and miraculous resurrection.

Excerpted with permission from The Jesus Bible, copyright Zondervan.

It’s so beautiful that the Old Testament testifies of Jesus before the world could imagine Him. He was promised to God’s people to be the Savior, the Christ, the Messiah whom the Old Covenant prophets foretold! Born of a virgin, named Immanuel. God with us! Come share your thoughts on the loving gift from God of prophecies about Jesus on our blog. We want to hear from you! ~ Devotionals Daily