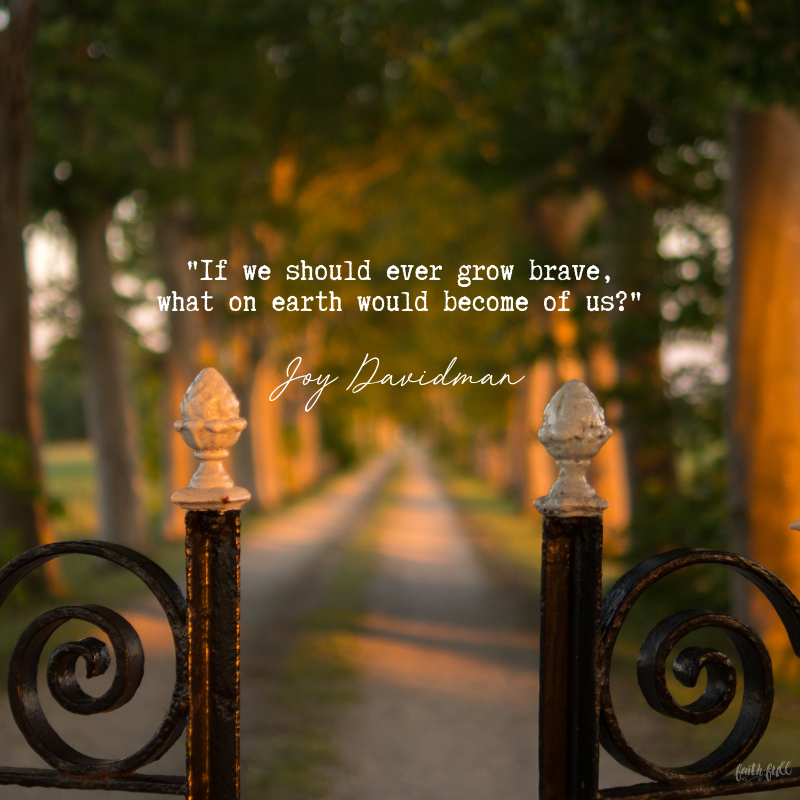 “If we should ever grow brave, what on earth would become of us?”

This question asked by Joy Davidman does more than beg for an answer, it might also set us off on a spiritual journey that irrevocably alters our lives, which is exactly what happened to Joy, the woman who became C. S. Lewis’s wife.

The award-winning poet and author asked this question months before starting a three-year pen-friendship across the ocean from New York to England, with C. S. Lewis.

As a child, Joy Davidman began her spiritual pilgrimage with the awareness of nature’s beauty; this was the portal and touch point of her relationship to the world and the almost-silent knowing that there was “something more”.  When she was fourteen years old, there was a moment in a snowy forest when she thought that the “meaning of all things was revealed and the sacrament at the heart of all beauty was laid bare”.  But then, joltingly, she returned to the world and reminded herself that beauty existed, but of course God did not.

It might make sense that she would feel this way, as Joy had no real understanding of God. She was born Helen Joy Davidman, the first-born child, and only daughter, of Jewish Ukrainian and Polish immigrant parents in New York City. Her parents were culturally Jewish, practicing the laws and traditions of the Jewish tradition, expecting Joy to do the same.  But by nine-years-old, Joy had read HG Wells, History of the World, and announced to her shocked family that she was an atheist and that nothing existed or mattered but pleasure.

A child prodigy of great intellectual prowess, Joy would not allow herself to believe in the very things she longed for in her reading and in her writing – something greater than herself. It was only later when she admitted that while her persona was hard-boiled and skeptical, her “inner personality” had always been interested in Christ. Her first published poem was an argument with Jesus about His resurrection. And yet she considered herself too intellectual to believe in such mystical fancies outside of the arts.  Even as she wanted the fourth dimension in her literature, she remained a staunch atheist. Jesus, she had once claimed, was nothing more than a “valuable literary convention.”

At the young age of nineteen, Joy graduated from Hunter College during the Great Depression and soon joined the Communist party in a “burst of emotion” after seeing a hungry student jump from the top of a College building and commit suicide. She desperately wanted to do something about the state of affairs in the world that she thought unfair. It was in the Communist party that she met and married another writer, William (Bill) Gresham. Yet, she will admit, the Hound of Heaven was hot on her tail, for during this time she read C. S. Lewis’s The Great Divorce, Mere Christianity and The Screwtape Letters, stating that those stories stirred “something sluggish” within her.

Slowly, inexorably, she was being drawn to the something more she longed to understand, yet it was the one night in 1946 when she had a “mystical experience” that changed everything.

When her husband threatened suicide, she found herself on her knees alone with two young sons.  In an eloquent essay titled The Longest Way Round, she does her best to articulate the ineffable, writing that the experience was like “waking up” and that she’d taken her life “watered down, diluted by time and space” until that moment. In those thirty seconds, she forgave enemies, understood God had always been there, and realized how much energy she’d expended keeping Him out. She called herself the “world’s most astonished atheist”.

She soon realized and wrote that “life is too intense to be endured with logic alone.” And that “if the knowledge of God was true, the thinking of my whole life had been false”. In her typical intense fashion, she began to search for what this knowledge meant for her life. She finally declared that only one religion had “…complete understanding of the grace, repentance and charity that came from God”. From that point on, Joy called herself a Christian and in early 1950 began a questioning and powerful pen-friendship with C. S. Lewis, who she called “Jack”.

The words of Jesus, she wrote, are timeless, and he tells us not to worry about tomorrow, and yet we do. Could it be that the courage to change her life, to delve into the things of God with an open heart and mind, to question and to dig deeply into her own doubt and fears, came from trusting Jesus’s command? Joy didn’t believe in a “safe life” and in the introduction to Smoke on the Mountain — her  book on the Ten Commandments — she begins with an essay on the Sin of Fear. “Fear,” she wrote, “is playing God by trying to control the future.”

Joy’s life changed dramatically when she moved to England with her two young sons where she overcame hardship on almost every front. She believed, “To be a Christian is to be reborn, and free, and unafraid, and immortally young.” Even after a terrible diagnosis of metastatic cancer, Joy continued in her journey of faith and doubt, always turning to God with both.

Her progress, as for most in the spiritual life, was as she described, “heartbreakingly slow”. She never felt that she arrived at faithful perfection, yet she loved and searched for God with all of her heart. Through illness, motherhood, her marriage to Lewis, her miraculous remission of three years and her death, she believed that God was and always would be calling her forward, calling us all forward.

This is where her journey – seeming so far away in time and of no value or worth or similarity to our own – becomes our metaphor: Joy knew there was Something More.

Joy carried with her a profound respect for the mystery, for the answers she would never have, but also a faith in the experience she had during those thirty seconds alone in her children’s nursery. She understood that there would never be answers that would fully satisfy her intellect, but that never stopped her from asking the questions.

The last words in Joy’s conversion essay, The Longest Way Round, are “In His will is our peace.” (a quote from Dante’s Divine Comedy). And her last words on earth were “I am at peace with God.” Yet it is the years and trust-filled space between those two bookend statements where we find the courageous life of a woman who journeyed from nature’s beauty to faith, from skepticism to mystical union, from Joy Davidman to Mrs. Lewis.

Does Joy’s “heartbreakingly slow” in her life of faith sound familiar? It does to me! I, too, have yet to arrive at faithful perfection and I doubt I ever will, but like Joy I love and search for God with all of my heart. How about you? Come share with us on our blog. We want to hear from you about imperfect faith! ~ Laurie McClure, Faith.Full