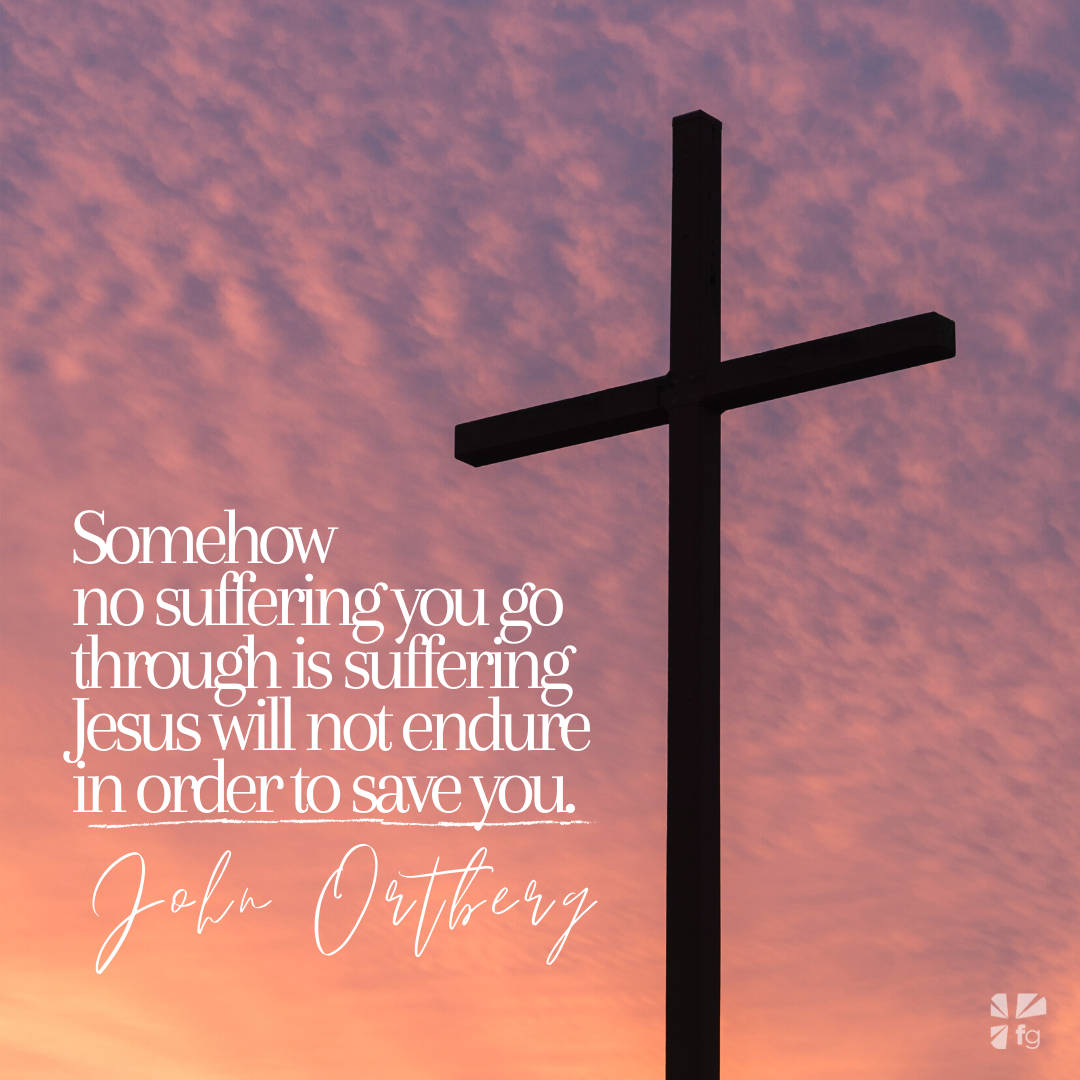 So far as we know, there has only been one day in the last two thousand years when literally not one person in the world believed Jesus was alive.

On Saturday morning after Jesus’ crucifixion, the disciples wake after not having slept for two days. The city that was screaming for blood the day before is quiet. Crowds have disbanded. Jesus is dead.

What do they do on Saturday?

It’s strange that the two days on either side of Saturday are so heavily discussed. Some of the brightest minds in the world have devoted themselves primarily to those two days; they have been across the centuries maybe the two most studied days in history. The Bible is full of what happened the day before, the day Jesus was killed. And the next day, Sunday, is the day believers say gave birth to the most death-defying, grave-defeating, fear-destroying, hope-inspiring, transcendent joy in the history of the world. Pentecostals still shout about it. Charismatics still dance because of it. Baptists still say Amen! over it. Presbyterians still study it. Episcopalians still toast it with sherry. Some people think of Sunday in mellower terms, as a metaphor for hope. And others think of it as a dangerous enemy of logic, reason, and mortality.

Even in the Bible – outside of one detail about guards being posted to watch the tomb – we’re told nothing about Saturday. Saturday is the day with no name, the day when nothing happened.

Now only a handful of followers remain. Friday was a nightmare day; Friday was the kind of day that is pure terror, the kind when you run on adrenaline. On Saturday when Jesus’ followers wake up, the terror is past, at least for the moment; the adrenaline is gone.

Those who believe in Jesus gather, quietly maybe. They remember. It’s what people do. Things He said. What He taught. Things He did. People He touched or healed. They remember what it felt like when this Jesus wanted them. They remember their hopes and dreams. They were going to change the world.

Maybe they talk about what went wrong. What in God’s name happened? None of them wants to say this, but in their hearts, they’re trying to come to grips with this unfathomable thought: Jesus failed. Jesus ended up a failure. Noble attempt, but He couldn’t get enough followers.

He couldn’t convince the chief priests. He couldn’t win over Rome to make peace. He couldn’t get enough ordinary people to understand His message. He couldn’t even train His disciples to be courageous at the moment of great crisis.

This odd day raises a question: Why is there a Saturday? It doesn’t seem to further the story line at all. We might expect that if Jesus was going to be crucified then resurrected, God would just get on with it. It seems strange for God to spread two events over three days.

In its own way, perhaps Saturday should mark the world as much as Friday and Sunday.

Friday, Saturday, and Sunday lie at the heart of the ancient calendar. They attributed great significance to the notion that this event was a three-day story.

The apostle Paul wrote, “For what I received I passed on to you as of first importance: that Christ died for our sins according to the Scriptures, that He was buried, that He was raised on the third day [Paul adds again] according to the Scriptures.” The Old Testament Scriptures are filled with what might be called “third-day stories.” When Abraham is afraid he’s going to have to sacrifice Isaac, he sees the sacrifice that will save his son’s life on the third day. Joseph’s brothers get put in prison, and they’re released on the third day. Israelite spies are told by Rahab to hide from their enemies, and then they’ll be safe on the third day. When Esther hears that her people are going to be slaughtered, she goes away to fast and pray. On the third day, the king receives her favorably.

It’s such a recurring pattern that the prophet Hosea says, “Come, let us return to the Lord. He has torn us to pieces… After two days He will revive us; on the third day He will restore us, that we may live in His presence.” All three-day stories share a structure. On the first day there is trouble, and on the third day there is deliverance. On the second day, there is nothing – just the continuation of trouble.

When it’s Friday, when it’s Saturday, as far as you know, deliverance is never going to come. It may just be a one-day story, and that one day of trouble may last the rest of your life.

I said before that Saturday is the day when nothing happens. That’s not quite right. Silence happens on Saturday. After trouble hits you, after the agony of Friday, you call out to God. “Hear me! Listen to me! Respond to me! Do something! Say something! Rescue!”

On Saturday, in addition to the pain of Friday, there is the pain of silence and absence of God.

When C. S. Lewis wrote his memoirs about coming to faith in Jesus, he called it Surprised by Joy. The book is about how his love of joy led him to faith in Jesus, and he actually took as the title a phrase in a poem by William Wordsworth. When Lewis wrote the book, he was a fifty-seven-year-old bachelor. He had met a woman named Joy whom, after the book was published, he ended up marrying. His friends enjoyed teasing him that he really had been surprised by Joy.

After a lifetime of waiting, Lewis knew love only briefly. Joy died soon after they were married of cancer, a lingering, very painful death.

So Lewis wrote another book: A Grief Observed. A Saturday book.

When you are happy, so happy you have no sense of needing God, so happy you are tempted to feel His claims upon you as an interruption, if you remember yourself and turn to Him with gratitude and praise, you will be – or so it feels – welcomed with open arms. But go to Him when your need is desperate, when all other help is vain, and what do you find? A door slammed in your face and a sound of bolting and double bolting on the inside. After that, silence. You may as well turn away. The longer you wait, the more emphatic the silence will become… What can this mean?

Why is He so present a Commander in our time of prosperity and so very absent a help in time of trouble?

A husband, a father, wants more than anything in the world to save his marriage. His wife will not listen and will not help. He is not perfect (not by a long shot), but he wants to do a really good thing. He can’t find out why his wife won’t respond to him, and he can’t stand what it’s doing to his children. Heaven is silent.

A mom and a dad find out the child they love has a terminal illness. They pray like crazy but hear only silence. She’s getting worse. You lose a job. You lose a friend. You lose your health. You have a dream for your child. And on Friday, it dies. What do you do on Saturday?

You can choose despair. Paul writes about this: “How can some of you say that there is no resurrection of the dead?” In other words, apparently some people said, “There is never going to be a Sunday. It’s Friday. Get used to it. Do disappointment management, because that’s as good as it’s going to get.” Some people – silently, secretly – live here. You can choose denial – simplistic explanations, impatience, easy answers, artificial pleasantness. Hydroplane over authentic humanity, forced optimism, clichéd formulas, false triumphalism.

Paul wrote to Timothy that some “say that the resurrection has already taken place, and they destroy the faith of some.” In other words, apparently some said, “It’s already Sunday. The resurrection has already happened for all of us, so if you’re having any problems, if you’re still sick, if your prayers aren’t being answered, you just don’t have enough faith. Get with the program.” Or there is this third option:

You can wait. Work with God even when He feels far away. Rest. Ask. Whine. Complain. Trust.

Oddly, the most common psalm is the psalm of complaint. The Saturday psalm. God, why aren’t you listening?

An ancient homily spoke of this strange day: What happened today on earth? There is a great silence – a great silence and stillness. A great silence because the King sleeps. God has died in the flesh, and hell trembles with fear. He has gone to search for our first parent as for a lost sheep.

Somehow no suffering you go through is suffering Jesus will not endure in order to save you.

From a human standpoint, we think of the miraculous day as Sunday, the day the man Jesus is risen from the dead. I wonder if, from Heaven’s standpoint, the great miracle isn’t on Saturday. When Jesus is born, the skies are filled with the heavenly hosts praising God because that baby is Emmanuel, God with us. Somehow God in a manger, somehow God in a stable, somehow God on earth. Now on Saturday the angels look down and see what? God in a tomb.

Excerpted with permission from Who Is This Man? by John Ortberg, copyright Zondervan.

Are you in a season where God seems to be silent? Does it feel like you’re suffering and He slammed the door in your face? That He doesn’t hear you? That it’s Saturday and maybe He’ll never respond? Have you wondered where on earth Jesus is and when in the world will Sunday come… or if it will come? Join the conversation on our blog! We would love to hear from you about Silent Saturday. ~ Devotionals Daily