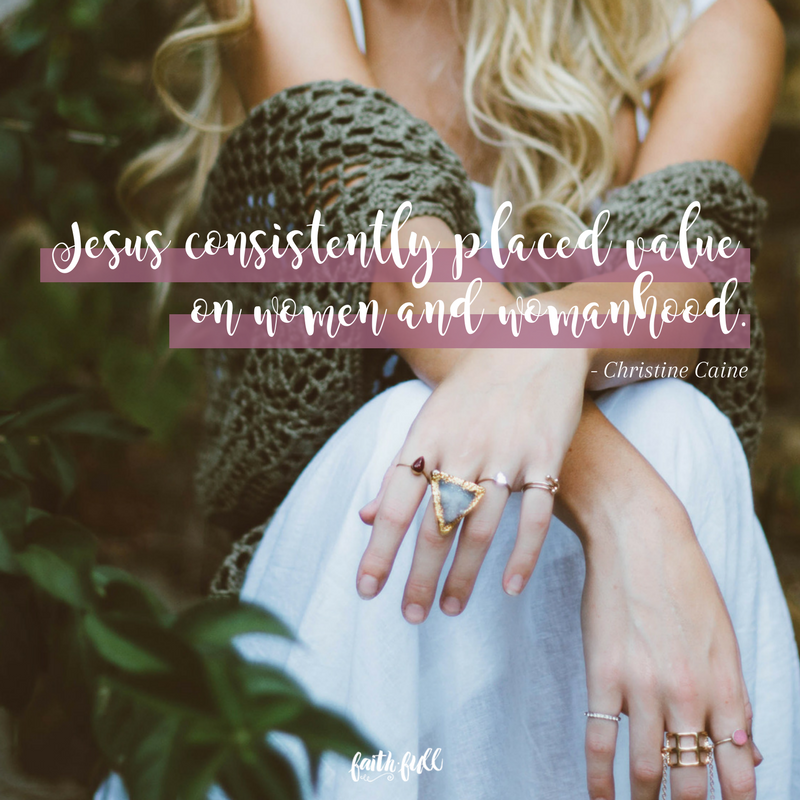 Many of the Samaritans from that town believed in Him because of the woman’s testimony. — John 4:39

When I first became a Christian, I had no concept of my value as a woman. Because of my past abuse and ensuing feelings of rejection and pain, I had spent many years desperately trying to earn my sense of worth. I thought that if I worked hard enough and achieved enough, I would somehow feel more valued by those around me. I wasted the better part of my life doing a lot of activities that led to nothing but frustration and emptiness.

As I began to study the Scriptures, I found that during Jesus’ ministry, He encountered many women like me. He did not reject them but lifted them up regardless of their past, forgave them, healed them, and encouraged them on a journey of becoming whole. He gave women opportunities to prosper and to take an active part in His ministry. He always treated them with honor, dignity, and grace, equal in value to men. This unconditional and indescribable love for all people, both men and women, was the revelation that captured my heart and began my own healing process.

Jesus boldly included women as a part of His life and ministry. In fact, He included everyone — and He still does today.

Have you felt Jesus’ unconditional love and acceptance? How will you be part of Jesus’ ministry?

Moses said to Pharaoh, “I leave to you the honor of setting the time for me to pray for you and your officials and your people that you and your houses may be rid of the frogs, except for those that remain in the Nile.” “Tomorrow,” Pharaoh said. — Exodus 8:9-10

The frog invasion in the book of Exodus must have been a pretty miserable experience for all concerned, so Pharaoh reacted swiftly to summon Moses and ask him to get rid of them.

But look closely at what happened next. Pharaoh told Moses, “Okay, I give in; I don’t want these frogs anymore. Please speak to your God.” Moses replied, “Okay, I will go and speak to God about it.” Then he asked Pharaoh, “By the way, when would you like the frogs to go?” and Pharaoh replied, “Tomorrow.”

Weird! Why, given the choice, would anyone want to spend one more night with the frogs? What was Pharaoh thinking? Some theologians argue that the reason he said this was because he hoped the frogs would disappear overnight, so he wouldn’t have to give God the credit. Whatever his rationale, I just cannot imagine what would compel anyone to spend one more night with a frog infestation if he or she did not have to.

This story serves as a picture of our lives. What “frogs” are we living with that God has offered to remove yet we are still hanging onto for “one more night”?

Everyone has “frogs.” We may not like to acknowledge it or think about it, but we have frogs. What frogs have invaded your life that you have learned to live with? Real frogs are, by nature, noisy creatures. They don’t just sit quietly; they hop around randomly and they croak incessantly. Just like them, the “frogs” in our lives are croaking and making a nuisance of themselves, but so often we choose to ignore the noise and put up with them. But God wants to help us get rid of those frogs so that we can clearly hear His voice and not have it drowned out by their racket.

I don’t know what your specific frogs are, but I wonder why you would choose to spend one more night with them when you have a God who says to you, “I want to set you free.” God wants to release us from the pain of our past, from the hurdles and obstacles that prevent us from being all He created us to be. I realize that it’s not easy to confront our frogs, and I’m not pretending it is — that’s precisely why so many of us say, “I’ll deal with this tomorrow” — but life is for living. That’s why I say, don’t wait until tomorrow.

God can set you free today.

What “ frogs” are plaguing your life? Stress? Rejection? Addiction? Insecurity? Are you ready to ask God to set you free?

Isn’t it amazing that Jesus loves us the way He does? In a culture than marginalized women, He treated women with honor and as equals. Today, even in a culture where women are still often disenfranchised and penalized for being female, Jesus values us and includes us in His plan. Awesome! I am so encouraged by the fact that God loves me and you that way. Considering that, why wouldn’t we automatically accept His healing, His freedom, His wholeness for us today. No more frogs, sisters! Let’s answer God, “Today!” Come share your thoughts with us on our blog. We want to hear from you! ~ Laurie McClure, Faith.Full