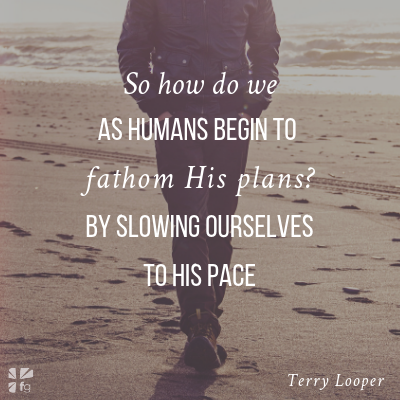 A few years ago, Sports Illustrated ran a “Holiday Help List” supplement that featured various gifts that would be of interest for athletic types. The description for a golf watch read:

Equipped with a hi-res color touch screen, a GPS receiver, and 38,000 preloaded courses, it provides distances to and from any possible target or hazard. So you know what to aim for and what to avoid.

If only downloading the Lord’s will were that easy, right? Who doesn’t want to know in advance which course to choose, what hazards lie ahead, and how close they are? In fact, I have a theory that we Christians want to obtain the Lord’s direction for our decisions— if He would only make His guidance clear. Were we able to tap a watch and run the analytics to determine where the possibilities would take us, we’d be golden! But life is not so measurable. And God’s thoughts and ways are a mystery to our finite minds.

So how do we as humans begin to fathom His plans? By slowing ourselves to His pace until we’ve gotten neutral. From there you can find your bearings and discern how and when to proceed through any crossroads in the Lord’s instructions.

We will work through each part of my process in the next section, but as an introduction, the steps are:

1. Consult your Friend Jesus.
2. Gather the facts.
3. Watch for circumstances.
4. Get neutral.

While I’ve numbered the steps and will speak of them in this order for ease of reference, getting on God’s pace is rarely a linear progression. In fact, the first three steps are often more like three streams running together until they converge into the “river” of Step 4. At that getting neutral point— after you’ve prayerfully spent time in God’s presence, obtained His perspective based on all the information at hand, and broken free from your own agenda— you’re ready for His answer. Whenever He delivers His answer, signaled by a sure peace deep inside, you do it. This is when you start to move forward again.

Because the Lord is guiding the entire process, it’s important to let Him determine the order of the steps. The Holy Spirit may guide you to repeat one step multiple times before moving you to another, or direct you across multiple steps at the same time. He certainly did both with me in the decision to start [my company] Texon. What’s important to remember is that God’s leading is not separate from any single step of the process; He can and will use any and all the steps to indicate His plans for you.

Think of this entire process as easing off the rush of your desires until you are objective. Not so driven by ungodly influences or worldly demands. Wide open to the Lord’s best for you. If you understand it in this positive sense, then you can see how the decision to slow your pace allows the first three steps to lead you to the fourth and final step of getting neutral, where you are perfectly positioned to receive the gift of God’s will and, ultimately, to act on it.

How can you begin “slowing yourself to His pace?” We’d love to hear your thoughts in the comments!