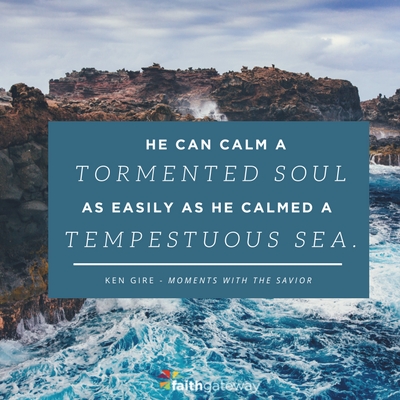 Editor’s Note: Welcome to Sit & Listen Saturday featuring Devotionals Daily on Alexa. Enjoy reading as well as listening to your devotional today from Moments With the Savior by Ken Gire.

There he froths about like a rabid animal, living on the ragged, outer fringe of humanity. Luke tells us it’s been a long time since this man has worn clothes or lived in a house.

There are no houses in Palestine for men like him. No hospitals. No asylums. Like jackals they are left to roam this no-man’s-land on the eastern shore of the Sea of Galilee. Their only refuge is the holes hewn in the hillside, used to bury the dead.

His hair is a matted tangle of filth. His body is scarred white around his wrists and ankles, where manacles once tried to restrain him. His haggard body is gashed with the self-inflicted punishment of stones. Barely a vestige of humanity remains.

How did this image of God become so marred and defaced? How did he get to where he is now? How did he end up here — his only home, a tomb; his only companions, demons?

Was he not once some mother’s little boy? Was he not once a child who played make-believe and made mud pies and skipped through the streets? And yet now, now his life has fallen into an abyss where there is no memory of the past and no hope for the future — only the torture of the present, a nightmare of unfettered terror.

Somehow, somewhere, in some time past, the forces of darkness gained a foothold in his life. How, we are not told. Or where. Or when. But some time ago, they sought him out like a pride of lions seeking prey. Somewhere he gave ground. Somehow he gave them an opening through which to attack. And he’s been a prisoner ever since.

Now his body is a beachhead for Satan. And it is on this beachhead that Jesus now lands.

As they reach the shore, the disciples are still scratching their heads. They have just witnessed the most remarkable demonstration of sheer, unbridled power they have ever seen — Jesus calming the storm. With His words — “Quiet! Be still!” — He not only calmed the wind but the waves as well. Little do the disciples realize that they are traveling headlong into yet another storm.

The disciples pull their boat onto the dry beach in a region of tombs and pigs, both unclean for the Jew. The mood is ominous and foreboding.

In front of them steep limestone cliffs jut skyward. But their eyes are not on the dramatic scenery. From one of the caverned tombs storms a wild man, ranting and raving as he rushes toward them in windblown fury.

Like a warm front hitting a cold front head on, the forces of good and evil collide. Infinite good versus incorrigible evil.

The disciples step back to brace themselves for the stormy encounter. But Jesus courageously stands His ground. And before this forceful gale crashes against them, Jesus calls out, “Come out of this man, you evil spirit!”

Immediately the violent gust abates. The wild man throws himself at Jesus’ feet. The Greeks did this before their deified rulers. Slaves did it before their masters. And the demons now do it with fear and trembling in his presence.

The man’s scream echoes off the stone cliffs, “What do you want with me, Jesus, Son of the Most High God?”

There is no confusion about who Jesus is. The religious leaders may debate. The crowds may be divided. But for the forces of evil, His identity cannot be denied.

With the question “What is your name?” Jesus lifts the veil on the dark face of the underworld.

The throaty voice rasps its reply, “My name is Legion, for we are many.”

A Roman legion is six thousand. How many are in this legion we aren’t told. But the regiment of evil is formidable. Even so, these diabolical forces cower at the feet of Christ. They grovel in the sand, begging not to be sent to the Abyss of eternal punishment. They plea instead for a lesser punishment — banishment into a herd of pigs.

Jesus grants the request. And the two thousand pigs feeding on the grassy plateau become host to these wicked parasites. In a crazed frenzy the pigs rush to hurl themselves off the cliffs into the wet jaws of the waiting sea.

Meanwhile, the pig herders rush off in the opposite direction, reporting the bizarre event to the townspeople. When they return and see the released man, they become afraid, not of the demons but of the deliverer. And as intensely as the demons pleaded to go into the pigs, the townspeople plead for Jesus to go.

What a tragedy. Jesus is at their very shore to cast out demons, to heal the sick, to tell the good news of His kingdom, to bring a blessing. And they beg Him to leave.

How many lives went unchanged, how many sick went unhealed, how many captives went unreleased because a herd of swine was judged as more valuable than a human soul?

Jesus never stays where he’s not welcome. He gets into the boat to leave. But now another man pleads with him, the man who had been possessed.

He begs to go with Jesus, to follow Him, to tell of the great things the Savior has done for him.

But Jesus does a strange thing. He tells him no. The man can’t understand. Even the disciples are shocked at the refusal. Dedicated followers are so hard to find. And yet this man is refused the opportunity.

No, this man is to go home, to run behind the lines. And run he will. He will start at home. Then he will tell his entire city. And then all the ten Gentile cities of the Decapolis.

Life for this man changed when a storm blew Jesus his way. On that tattered shore Jesus reached into the most terrifying of tombs. To pull a naked prisoner from the darkness. To set him free. To dress him in his right mind. And to send him home. He did it so that a lost little boy could be reunited with his mom. So he could skip in the streets once more. And tell the whole world the great things the Lord has done for him.

Excerpted with permission from Moments with the Savior by Ken Gire, copyright Ken Gire, Jr.

Our story may not be exactly like the demoniac’s story, but Jesus did free us and save us. He took us out of darkness and into light. And, He has sent us home or out into the world to share the great things He has done for us! Who are we telling? Who is hearing the Good News? Come share with us on our blog. We want to hear from you! ~ Devotionals Daily