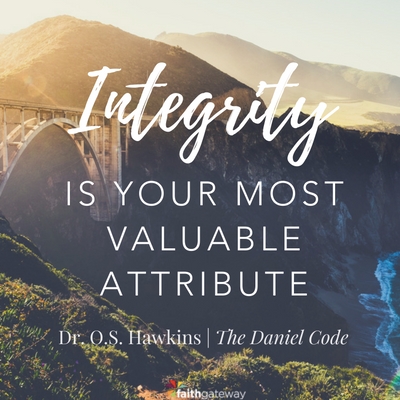 It seems with each passing day we are sinking a little deeper into the quicksand of cultural collapse. For those of us who, like Daniel, seek to live in the world but not of the world, what is the single most important attribute we need as we strive to influence the culture in a positive and productive way?

Some people quickly point to intellect. After all, they argue, knowledge is power in our world. The greater our intellectual edge over others, the better we can gain the upper hand. Others quickly say that it isn’t intellect as much as it is intensity, that passion accompanied by a spirit of conquest becomes contagious. Still others argue it is insight, that is, good old common sense, the ability to see wisely into the issues, and discernment for addressing them. However, in the final analysis, the single most important attribute of those who make a lasting difference for good in a collapsing culture like our own is… integrity!

We have all known men and women who possessed tremendous intellect and persuasive abilities to influence many, but who ended up having little to no integrity and have since been forgotten. We can also remember those who possessed an inordinate amount of intensity and passion for their task. However, they had little to no integrity, so they, too, offered the culture little, if any, positive influence. We have also come into contact with those who possessed keen insight and the ability to make wise decisions, but who ultimately revealed they had no integrity. They lost their voice as well.

If we are going to find our way in a culture that has lost its way, we must be people of lasting integrity.

Daniel certainly had a high level of intellect. We read that he was

And talk about intensity for the task! He was the epitome of passion. He

purposed in his heart that he would not defile himself. — Daniel 1:8

As for insight, not only was he gifted in wisdom and knowledge; he was

He keenly discerned the meaning of Nebuchadnezzar’s dream and described in detail the message of the handwriting on the wall of Belshazzar’s palace. However, it was Daniel’s personal integrity that truly set him apart from all others in the kingdom and enabled him to achieve such incredible success.

Daniel distinguished himself above the governors and satraps, because an excellent spirit was in him. — Daniel 6:3

Daniel is exhibit A of the fact that those who influence others and engage their culture for good are men and women of impeccable integrity.

Integrity can be defined as “the steadfast and constant adherence to a moral or an ethical code.” It is “the state or quality that strives to be complete, free of the corrupting influences of improper motives or methods.” The thesaurus pairs integrity with such words as honesty, completeness, and incorruptibility. In the language of the New Testament, the word integrity translates a complex Greek word containing a negative prefix, the preposition through, and the noun corruption.

The word very literally describes a man or a woman in whom runs “no corruption through them.” Integrity suggests a consistency between what we do in public and who we are in private. That is to say, what you see in public of a person of integrity is what he or she is in private.

Integrity is what causes the professional golfer to report his disqualifying infraction when no one else even noticed it. It is what motivates a witness to tell the whole truth from the witness stand when no one else would know if she were less than truthful. It is personal integrity that keeps men and women in the workforce from cheating on overtime hours and expense accounts. And it is our personal integrity that serves to keep us honest when April 15 rolls around each year and the IRS comes looking for our money. Integrity is what keeps us faithful to our spouses when we are away from home on a business trip.

Our contemporary culture is desperately in need of men and women of integrity. Too many of our national leaders, on both sides of the political aisle, have failed miserably on this point. With increasing regularity, another gate swings open to reveal high-profile individuals living with little or no integrity. Our culture has gone from Watergate to Irangate to Monicagate and on and on. Our corrupt culture is the product of leaders in high places who are still debating what “the meaning of is is.” No wonder our young people question if character really counts anymore.

Our culture is crippled by a lack of integrity at every level of society. Too many local municipalities, like my own, have been dragged through the mire of widespread corruption and investigations of wrongdoing in their city governments and school systems. It is not uncommon to hear of those who resign from public office in disgrace before they are publicly exposed or indicted for some form of corruption. Sadly, there are religious leaders who score no better on the report card of personal integrity. Even as I type these very words, I heard just today of another high-profile pastor who has resigned due to a lack of personal integrity.

What does all this have to do with the familiar story of Daniel in the lions’ den that we now approach in Daniel 6? If, as a child, we ever heard Bible stories, the story of Daniel in the lions’ den was more than likely near the top of the list. Pictures of Daniel lying down with the docile lions adorn the walls of many nurseries. For most, the focus of the story is Daniel’s miraculous deliverance. But the real message has to do with Daniel’s conduct not while he was in the lions’ den but before he ever got there! It is a message about integrity: character does count, and God Himself honors integrity.

Throughout these pages we have watched Daniel, time and again, impact the culture around him. He could have lived with resentment and joined the other exiles in hanging their harps on the willows and losing their song. But he rested in the fact that God was in control, that God Himself held the remote control in His own hand. Daniel knew that God also kept His finger on the thermostat when his three friends ended up in the fiery furnace.

Daniel influenced a pagan culture primarily because he lived a life of integrity.

You might have the highest intellect in the room, you might be moved and motivated by an intensity manifesting itself in contagious passion, you might have keen insight to cut through to the heart of the issues of life, but if you don’t live with integrity, you will join the many others on the ash heap of what might have been.

Character does count, and those who influence their culture have one thing in common: like Daniel, they are men and women of integrity.

Integrity is your most valuable attribute. Don’t leave home without it.

“If we are going to find our way in a culture that has lost its way, we must be people of lasting integrity.” In this day of such low integrity in the public sphere, both in our culture and within the church, we Christians can look to Daniel as a man of character and integrity. How are you practicing not only passion and knowledge, but also integrity in your family, church, workplace, and community? Come share with us on our blog. We want to hear from you! ~ Devotionals Daily