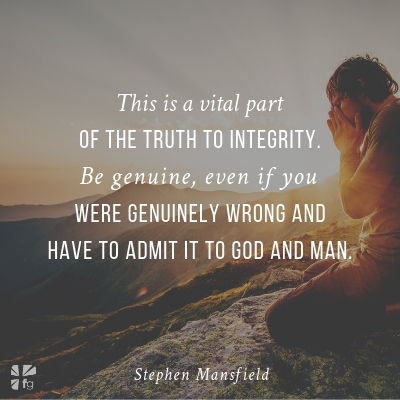 The army of ancient Rome used this word almost daily in its inspection ritual. A commander would walk the line of legionnaires, inspecting each man to confirm that he was fit for duty. As the commander came before one of his men, the soldier would sweep his fist hard into the middle of his chest, just over his heart, and shout “Integras!” The commander first listened for that rich, full quality of a healthy soldier’s voice and then he listened for the clang that well-kept armor would emit when struck. The two sounds—the man’s voice and the condition of his armor—confirmed the integrity of the soldier.

The word indicates soundness through and through. We sometimes hear people say things like, “Cut that boy anywhere and he bleeds Texas.” This is close to the meaning of integrity. A man isn’t healthy if he is sound in one part of his body or life and unsound in another part. He’s only healthy, true, and noble if he is all these things in all that he is.

This broader definition of integrity has always come to my mind when I think of the ancient story of Job. Now most people don’t like the story of Job. It seems too depressing to them. Perhaps it scares them a bit to think of a God who can take away all a man has any moment he chooses. Besides, the book of Job is long, preachy, and filled with angry guys arguing by the hour. It’s not usually on anyone’s list of “Favorite Books of the Bible.”

I’m fascinated by this man Job, though. I’m moved by how he stood his ground and took his dissent just as far as righteousness allowed but no further. Let me tell [you] how I think Job illustrates seven principles all manly men need to know.

1. Job will not be swayed by the opinions of men.

He knows what is true. He listens respectfully to his friends. He is polite, yet he won’t contort the truth to please a mere human. I wish I could say this has always been true of me. I hurt when men think ill of me. I find myself trying to win their favor. If I don’t catch myself, I can start serving men for the paycheck of their approval and so find myself far from God and who I really am. No man can serve the opinions of other men and be his own man, a manly man. Job taught me this.

2. Job speaks the truth as he knows it.

He understands the power of it. Whatever he has left in this life, he isn’t going to lie. He stands on his integrity. He is willing to die from this experience if he must, but he is never going to say anything about it that isn’t true. By contrast, I have often felt like a liar in a land of liars. The truth has sometimes seemed like an illusion to me, or perhaps like something too expensive to hold on to. Job whispered gently in my ear, “Truth is all you really have. Speak it in integrity. Be a man.”

We are told this repeatedly in the forty-two chapters of the book: “In all this, Job did not sin by charging God with wrongdoing” (Job 1:22 NIV). We can see Job does not understand what is happening to him. He knows he has done nothing deserving the total destruction of all he holds dear. Yet he also knows God is just. Job might get angry. Job might curse his insulting friends. Job might regret his life in this world. But he never wavers from trust in God’s character: “Though he slay me, yet will I hope in him” (Job 13:15 NIV). I’ve had some hard times, as most men have, but I’ve had nothing happen to me that approaches Job’s suffering. Yet I cannot say I kept my faith in God as Job did. So Job helped me. The simple phrase, “Though he slay me, yet will I hope in him”—a reversal of everything this world lays upon us that it is—tells me what I need to know. God may do what he pleases, even if it means my destruction. Yet still, I keep my hope set on him. I say it again: Job was a man!

He’s not going to sit silently while lies are told and his character is assailed. He speaks. He gives an argument. He makes a defense. I’ve heard people say if a man defends himself vigorously he must be guilty. It’s as though making a defense is itself a sin. I don’t think so. I think it is the mark of righteousness in a person’s soul. The apostle Paul thought so too. He told the church at Corinth they had obviously repented of their sins since they had an eagerness to clear themselves of wrongdoing (see 2 Corinthians 7:11). There is certainly a type of defensiveness and egotistical refusal to take correction that is ungodly and unproductive. A man needs to know the difference between this cowardly behavior and the righteous desire to declare the truth. Job knew this difference. We should too.

5. Job was quick to admit his wrongs.

Though he did not sin in accusing God, Job did have to admit that he “spoke of things I did not understand” (Job 42:3 NIV). This, too, is a sign of manly righteousness. Be teachable. Own your sins. Admit failings. Don’t pretend to be what you are not. God alone is judge, and he already knows. This is a vital part of the truth to integrity. Be genuine, even if you were genuinely wrong and have to admit it to God and man.

If what happened to Job had happened to me, the Book of Stephen would have been about three chapters long. I would not have sat around letting fools push their stupidity upon me. And I would never have come to the grand restoration that Job ultimately enjoyed. He seemed to know it is important to listen to your critics. One of the great arts of living is that you hear truth in the mouth of your enemies, that you let your critics be the unpaid guardians of your soul. It takes patience and a whole lot of self-control. Often, though, your critics can actually help you if you’ll search, as a friend once said, for the diamonds of truth in the dunghill of men’s opinions. I’ve learned this now—from Job.

He might have killed himself. He might have cursed God. He might have killed his stunningly ignorant friends. He might have lost all hope. Instead, in agony and while a stench to his friends, he looked to God and waited. I do not know what to do, but my eyes are on you. Men want to act, to fix what’s wrong and broken. Sometimes, though, the better part of manhood is to know what you can’t fix and to wait on the God who can. Waiting is hard. Waiting is a test. Waiting is also a way of saying, “God is God and I am not. He’ll act when he’s ready. Until then, I’m here.” It may be the greatest statement of faith we can make, particularly during times of suffering. It’s hard. That’s why it’s part of being a manly man.

Which of these 7 principles that Job exemplifies resonates the most with you? In what areas of your own life do you feel God desires to strengthen you integrity? We’d love to hear your thoughts in the comments!