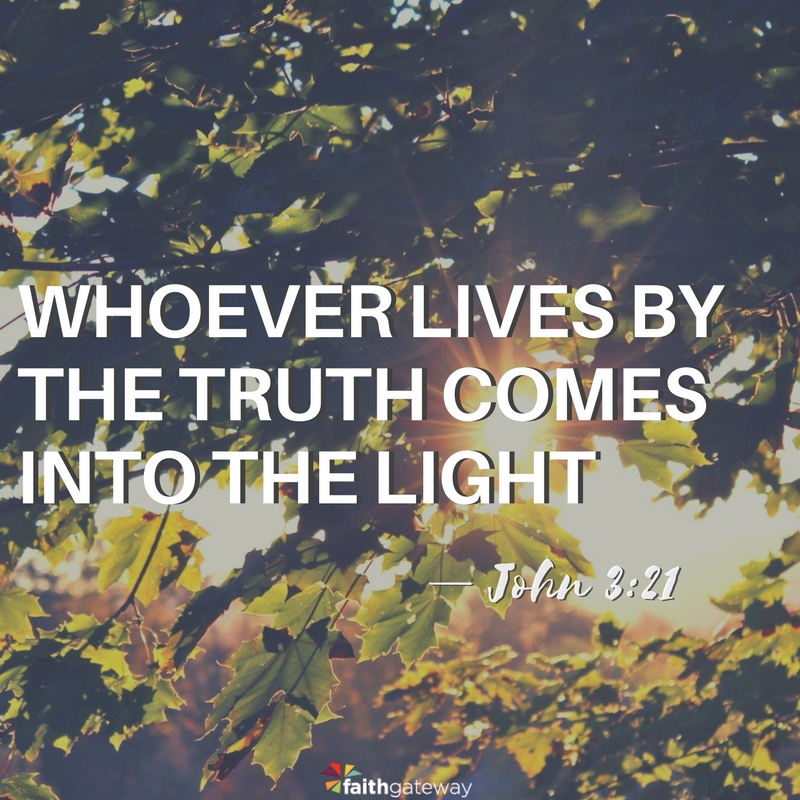 There was a man of the Pharisees named Nicodemus, a member of the Jewish ruling council. He came to Jesus at night and said, “Rabbi, we know You are a teacher who has come from God. For no one could perform the miraculous signs You are doing if God were not with him.”

In reply Jesus declared, “I tell you the truth, no one can see the kingdom of God unless he is born again.”

“How can a man be born when he is old?” Nicodemus asked. “Surely he cannot enter a second time into his mother’s womb to be born!”

Jesus answered, “I tell you the truth, no one can enter the kingdom of God unless he is born of water and the Spirit. Flesh gives birth to flesh, but the Spirit gives birth to spirit. You should not be surprised at my saying, ‘You must be born again.’ The wind blows wherever it pleases. You hear its sound, but you cannot tell where it comes from or where it is going. So it is with everyone born of the Spirit.”

“How can this be?” Nicodemus asked.

“You are Israel’s teacher,” said Jesus, “and do you not understand these things? I tell you the truth, we speak of what we know, and we testify to what we have seen, but still you people do not accept our testimony. I have spoken to you of earthly things and you do not believe; how then will you believe if I speak of heavenly things? No one has ever gone into Heaven except the one who came from Heaven — the Son of Man. Just as Moses lifted up the snake in the desert, so the Son of Man must be lifted up, that everyone who believes in Him may have eternal life.

“For God so loved the world that He gave His one and only Son, that whoever believes in Him shall not perish but have eternal life. For God did not send His Son into the world to condemn the world, but to save the world through Him. Whoever believes in Him is not condemned, but whoever does not believe stands condemned already because he has not believed in the name of God’s one and only Son. This is the verdict: Light has come into the world, but men loved darkness instead of light because their deeds were evil. Everyone who does evil hates the light, and will not come into the light for fear that his deeds will be exposed. But whoever lives by the truth comes into the light, so that it may be seen plainly that what he has done has been done through God.” — John 3:1-21

The résumé is impressive:

A Pharisee — one of the intellectual guardians of the Law.

Member of the Sanhedrin — the esteemed ruling council.

Most impressive. Nicodemus is at the top of the religious ladder, looking down.

But the view from the top is, at best, disappointing. And now, he steps down from that ladder to walk the streets. Searching.

He comes at night.

Two words between the lines in his résumé that follow him through the Gospel like a stray. When John later describes him, he doesn’t mention the credentials, but rather this telling clue to his character:

Nicodemus, the man who earlier had visited Jesus at night.

Thus, cloaked in darkness, Nicodemus wends his way through the side streets of Jerusalem… slowly… cautiously… every so often stepping into the shadows to avoid recognition.

He comes as a seeker of truth. But he comes at night.

He comes not in an official capacity but in a personal one. It is a chancy meeting. Gossip could hurt him. He has much to lose — his prestige as Israel’s teacher, his position on the ruling council, his entire peer group.

But still he comes. Not for curiosity’s sake but for conscience’s sake. The buying and selling in the temple courtyard has always bothered him. But he looked the other way. “What’s good for business is good for the temple,” the money changers would say, flashing their toothy smiles as he passed them on his way to the temple. But he always felt uneasy about it. Unclean.

Then this Jesus came. And he didn’t like what he saw either. Something about the way he upended their tables and chased their animals from the courtyard seemed… seemed… like the cleansing wrath of God, burning away the dross that had accumulated around the temple.

But Jesus turned over more than the tables of the money changers that day. He upended the wooden thinking of the most prominent teacher in all Israel.

How the words of this unorthodox Jesus haunted Nicodemus:

How dare you turn My Father’s house into a market!…

Destroy this temple, and I will raise it again in three days.

Who could explain such words?

Israel asked its teacher. But the teacher had no explanation.

And the report of Jesus changing the water into wine. Who could explain that? How could Jesus do such a thing unless… unless God’s hand was truly upon Him? But He has no credentials, no formal schooling, and He shows no desire to be a part of the inner circle of religious leadership.

He’s an enigma, this Jesus.

Night after night, Nicodemus wrestles with the same question: “Could this be the Messiah?” And night after sleepless night, it backs him into a corner, pressing him for an answer.

So he comes. At night, yes. But he comes.

No doubt, Jesus is exhausted from a day of teaching, answering questions, performing miracles. But He is accessible, always accessible, to the one who comes. And He meets Nicodemus when Nicodemus dares to meet Him: at night.

It is a disarming meeting for this Pharisee, both theologically and personally. And as the conversation seesaws back and forth, the weight of it falling on Jesus, it’s plain to see, even at night, who is the teacher and who is the one taking notes.

Nicodemus has rubbed shoulders with the most respected minds in the religious hierarchy. Some were his former teachers; some, his former students. They were the elite. He has peered into all of their eyes. And he always felt the same way, that something vital was missing, missing from all of their lives — including his.

Now as his soul is drawn into the eyes of Jesus, he senses he is touching the hem of a divine garment. The look in Jesus’ eyes. The authority in His voice. Instead of jots and tittles of the law, He speaks words of life.

A lifetime of studying and teaching the Word, and now Nicodemus is face-to-Face with the Word incarnate.

He came in darkness. Now he stands in the glowing presence of the Light of the World. He is a short step from the kingdom of God, at the very gate. And as the fluid words cascade from Jesus’ lips, he realizes — this is He of whom the prophets spoke.

A spark touches the far edges of his soul, but it is a slow burn. For Nicodemus is a careful man. And he has much to lose.

Still, an ember has fallen into his heart. An ember that tragedy will someday fan to a blaze of courage. And it will be this tragedy that brings Nicodemus out of the shadows to the side of the Savior… in the full light of day.

Thank You that I can come and bring You my doubts, as did Thomas; my fears, as did Joseph of Arimathea; my shame, as did the woman caught in adultery; my questions, as did Nicodemus.

Thank You for the time You met with me at night, when You told me the bad news that I stood outside the gates of Your kingdom. And the good news, that all I would have to do to enter would be to take a step of faith out of the darkness and into Your light.

I confess, there are times when I have loved the darkness more than the light. Even as Your child. And even now, there are times I walk along gray borders, flirting with the enticing shadows cast by the world. There have been times I have made this world not a brighter place but a darker one. By my thoughts. By my words. By my deeds. For all these shameful times when I have been an unworthy subject, forgive me, I pray, O most worthy King.

Excerpted with permission from Moments with the Savior by Ken Gire, copyright Ken Gire, Jr.

Are you walking in the light? Unashamed of Jesus? Unabashedly showing your association with Him instead of with the world? Today, let’s pray that we bring His light to the world around us instead of darkness with our thoughts, our words, our actions. Come share your thoughts with us on our blog. We want to hear from you! ~ Devotionals Daily