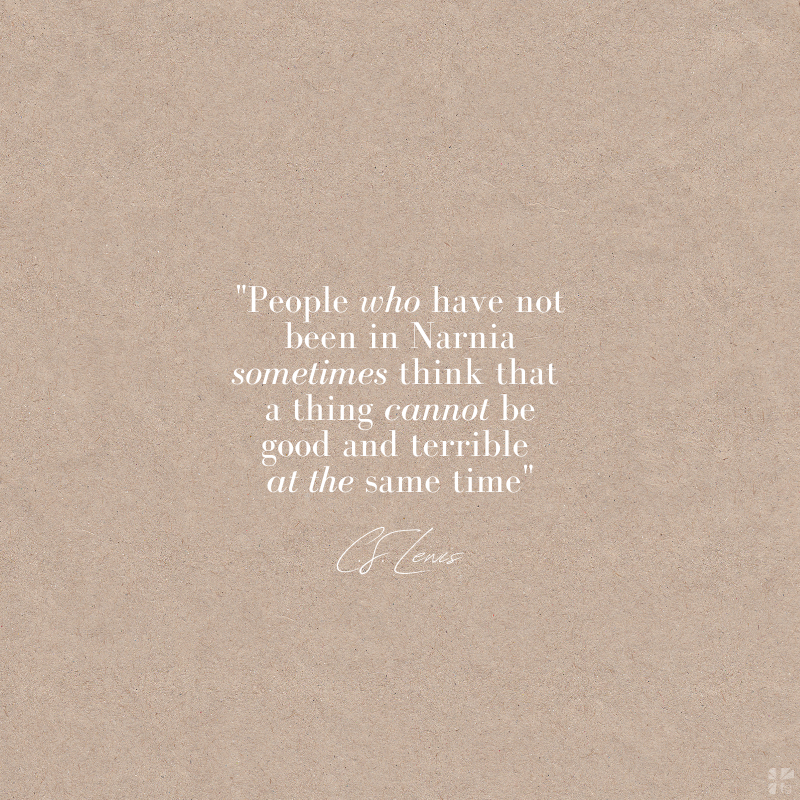 In the garden of Gethsemane Jesus addresses His prayers tenderly to “Abba, Father” but also reverently to the One for whom “everything is possible” (Mark 14:36). He is recognizing that intimate love and infinite power coexist and coalesce without contradiction in the heart of God.

C. S. Lewis cautions us to remember that, for all his tears, Aslan is not a tame lion. “People who have not been in Narnia sometimes think that a thing cannot be good and terrible at the same time,” he says.1

An old Hebrew saying makes a similar point: “God is not a kindly old uncle; He is an earthquake.”2 This is great news for those of us struggling with unanswered prayer, because a kindly old uncle can merely smile at things that an earthquake can actually shift. Without an omnipotent, omniscient God, there is no longer any hope of a miracle or a meaning in our suffering.

The objections we raise when our prayers go unanswered tend to question either God’s love (“Don’t You care?”) or His power (“Can’t You help?”). And so, having affirmed the Father’s love in the previous chapter, we will now turn our attention to the nature of His power in the light of our disappointments in prayer.

The American sitting opposite me in the pub was wearing a scruffy denim jacket, his ear was pierced, and he was quietly pulling and pummeling at my conscience. Rob Morris spends a lot of his life trying to rescue children who are victims of sex trafficking and there was no mistaking the fire in his eyes as he described the little girls he had seen living in slavery in the brothels of South East Asia. Rob described one brothel where the girls are made to wear uniform red dresses with large number badges so they can be easily chosen. The children choose to watch cartoons while predatory men drink beer and watch them through a glass screen in order to take their pick. Rob told me that, on one occasion, when investigators raided a brothel to rescue some children, they discovered that one of the girls had written a prayer for help all over the wall of her room. Had they been sent in answer to that little girl’s heart cry to God? Had He seen her graffiti, heard her plea, and intervened to save her life?

Such a hopeful possibility inspires Rob in his work, and yet, he admitted that it also disturbs him deeply. It troubles him because there are hundreds of thousands of children like that girl, all crying out to God for help, and yet no one will ever rescue them. “Miracles seem so random,” he said. “One person gets rescued or healed or whatever, but a thousand others don’t.”

He paused, searching my face for permission to say what he was really feeling. “Sometimes I think I’d actually find it easier if God didn’t do miracles,” Rob said. He looked around at the faces in the pub, but I could tell that his mind was lost in the streets of South East Asia, watching men watching girls watching cartoons. “I mean, if God never did miracles, we could just get on with using prayer like a meditation technique and trust Him for all the non-physical stuff. I could accept that. What confuses me is the fact that God does sometimes seem to intervene dramatically and supernaturally in answer to prayer. He does it sometimes, so why doesn’t He do it all the time? Miracles just seem so arbitrary.” Rob paused, staring into his beer as if looking for answers. “Is it just some kind of lottery who gets a miracle and who doesn’t?”

Rob looked up from his pint. It was my turn to stare into mine.

When wrestling with the questions of unanswered prayer — whether you’re a rabbi with a dying child, a man on a mission in a Bangkok brothel, or somebody who’s prayed a thousand times for healing — it’s natural to question the apparent limitations of God’s power with regard to miraculous intervention. Is everything really possible for the Father? you sometimes wonder darkly. Maybe He’s limited in how many miracles or in what kind of miracles He can do.

Few people state this doubt as brazenly as Kushner. More often, they say things that sound very spiritual and faith-filled, such as, “Prayer isn’t about changing reality. It’s about changing the way we look at reality.” They elevate the contemplative and internal dimensions of prayer at the expense of the primary type of prayer that is petitionary: the act of asking God to do or to change some actual thing.

However, Jesus did not tell His disciples that if they had faith as small as a mustard seed they would be able to shift their attitude towards the mountain. He said that the mountain itself would move. Reality would shift in obedience to their faith, and Jesus added, “Nothing will be impossible for you” (see Matthew 17:20-21).

It is clear from Christ’s subsequent ministry and that of His disciples — not to mention the testimony of the church down two millennia — that God can and does do miracles. The omnipotence of God is a consistent theme of the entire Bible — even when it creates great problems of faith for the writers.

If we go right back to the earliest book of the Bible, we find that at the conclusion to Job’s litany of agonizing experiences, God finally appeared and revealed His power. When (to coin Kushner’s title) bad things happen to this good person called Job, God does not say, “I feel your pain, son, and I’d like to help, but I can’t.” Quite the reverse! God rolls back the clouds to unveil an awesome vision that, far from diminishing Job’s expectations of God’s power, renders Job speechless.

Where were you, God rumbles, when I laid the earth’s foundation? Tell me, if you understand. Who marked off its dimensions? Surely you know… who laid its cornerstone — while the morning stars sang together and all the angels shouted for joy? — Job 38:4-7

The book of Job is therefore both the most frustrating and enlightening treatment of unanswered prayer in the Bible, because God’s solution to so much misery is merely and ultimately to reveal His greatness.

The great psychoanalyst Carl Jung found the story so disturbing that he wrote a book called An Answer to Job, setting himself face to face with what he considered to be “the unvarnished spectacle of divine savagery and ruthlessness.”3 So troubled was Jung by Job’s predicament that he attempted to psychoanalyze God, concluding with a suggestion so bizarre that it would be hard to take seriously if it had not come from one of the most respected thinkers of the twentieth century. Jung proposed that God was in fact so ashamed of His behavior towards Job that He sent Jesus to die in penance for His own injustice. Jesus, said Jung, was given to the world as a guilt response because God felt bad and needed to grow in His own moral consciousness!4

Jung had every right to rage against the apparent injustices of a God who permits suffering. He was, remember, writing just seven years after the holocaust in a continent devastated by war. But he missed the fundamental point of the book of Job. No matter how much we might wish such a graphic depiction of tragedy to explain the reasons for suffering — to answer the great “Why” of life — this ancient text concludes with an epiphany of God’s power that extinguishes Job’s need for such an explanation. The book, we discover, is not so much about why bad things happen to good people as it is about who God is and how — when faced with the gross unfairness of life — we are to respond. It is a message that defies the cheap comfort of easy explanations but leaves us in no doubt about God’s power.

With its awesome conclusion, the message of the book of Job ultimately contradicts Kushner’s theodicy of divine weakness. And what of the garden of Gethsemane? Do we have the text wrong? Did Jesus in fact pray, “Abba, Father, a few things are possible for you. I wish you were able to take this cup from me, but I know you can’t”? No! Christ’s prayer in Gethsemane unequivocally asserted the Father’s absolute power over everything. Through Good Friday and Holy Saturday, Rabbi Kushner and all those who doubt God’s miracle-working power today might seem thoroughly vindicated. But with Easter Sunday comes the ultimate revelation for all time that our God can work miracles in the physical realm. He is Abba, Father. Yet, He is also the sovereign Lord.

Many people today are quietly downgrading their belief in miracles because they have experienced deep disappointments.

“We tried it and it didn’t work,” they say of that kind of prayer. The singer Nick Cave captures their sentiment perfectly in the haunting opening line to one of his most popular songs: “I don’t believe in an interventionist God,” he purrs, “But I know, darling, that you do.” We must be honest and admit that miraculous healings are more rare than we would like them to be, and much more rare than many preachers would lead us to believe (we will explore this in more detail in chapter 8. Undeniably, there have been many terrible abuses of vulnerable people desperate for a miracle (Jesus predicted that this would happen). But belief in God’s power to intervene has never been an optional extra to the Christian faith. Every clause of the Apostles’ Creed hinges upon a miracle: the creation of the world, the virgin birth, the resurrection of Jesus from the dead, His ascension into Heaven, the bodily resurrection of the saints, and the life everlasting. It’s quite a list!

We shall see later that there may be some limited truth in Kushner’s argument insofar as there are areas in which God, in His sovereignty, may choose to restrict His own power. However, while Kushner’s view of God as intrinsically limited may seem comforting at a superficial level, it simply does not hold up to scrutiny. Biblically, it is not consistent with the revelation of God in the Hebrew and New Testaments. Historically, Kushner’s downsizing is not consistent with extensive human experience of God’s miraculous intervention in every age. Philosophically, it is not consistent with any monotheistic definition of divinity. Even personally, it is, ultimately, not comforting to abandon all hope of miracles by shrinking our view of God’s power to the size of our own pain. As Sammy said to me from her place of despair, “God is all I’ve got.”

Excerpted with permission from God on Mute by Pete Greig, copyright Pete Greig.

It’s common to wonder how God can be both good and allow suffering at the same time — especially right now. It’s okay to ask Him your questions. They don’t scare Him. How are you praying through devastation and suffering right now?