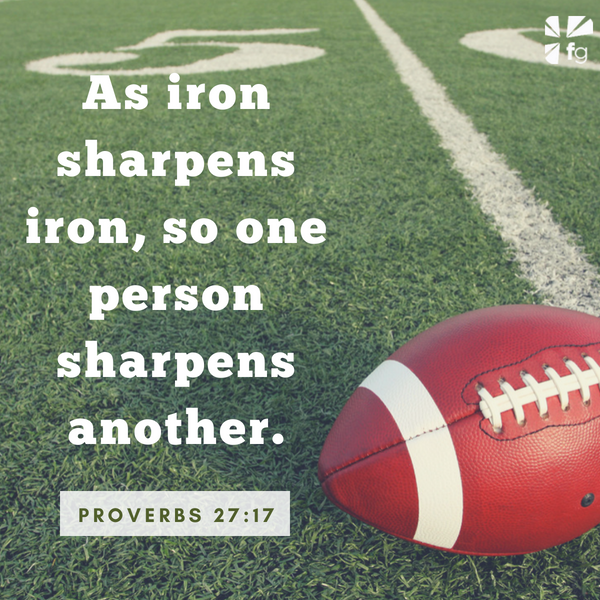 One day after the Philadelphia Eagles lost to the Green Bay Packers in their 2017 preseason opener, the reality that the NFL is a cruel business hit Carson Wentz hard. Jordan Matthews was traded to the Buffalo Bills along with a 2018 third-round draft pick for cornerback Ronald Darby. Wentz and Matthews had just traveled to Haiti together a few months earlier. Matthews was his go-to wide receiver on the field and one of his closest buddies off the field. Everyone on the team loved Matthews, a hard worker who did whatever he could to help his teammates. Wentz, Matthews, Trey Burton, Zach Ertz, Jordan Hicks, and Chris Maragos were the core of the team’s Christian brotherhood. Proverbs 27:17 says:

These men truly sharpened each other. They lifted each other when someone was down. They encouraged each other in tough times and pushed each other to dig deeper in their relationship with the Lord. The six players gathered for an emotional sendoff dinner the night the trade went down, and then drove Matthews to the airport.

“It’s tough. This is my first time experiencing this with someone that’s one of my best friends,” Wentz said a day later. “It’s tough on him too. It’s kind of out of the blue. Replacing a guy like that in the locker room is not going to be easy.”

Pastor Ted Winsley reminded the players the trade would give Matthews an opportunity to impact a new set of teammates.

“Whenever someone leaves, it is because you have an assignment and you are supposed to take it and share it,” Winsley said. “This was a reminder how precious it is, and it was a reminder of why we’re together, to become rooted, to become grounded, and then to spread it. Players, when they leave Philadelphia, they tell other players that what we have here is special.”

Christianity is nothing new to the NFL.

Many players from Reggie White to Kurt Warner to Tim Tebow have boldly professed their faith. The 2012 Super Bowl champion Baltimore Ravens had a strong Christian contingent led by Ray Lewis. Same for the 2013 champion Seattle Seahawks with Russell Wilson. But the 2017 Eagles were a different breed of young players who passionately shared the gospel, held each other accountable, and encouraged, motivated, and inspired each other to walk their talk daily.

“We had a great brotherhood in Seattle, guys who loved Jesus passionately and were committed to the Lord, and that was the cool thing because you saw guys who were willing to put that much more into their sport because they knew they were honoring the Lord through their gifts and talents and abilities, so you saw the sacrifices probably even greater because they knew they were playing for something greater, and the same here with the Eagles,” said Maragos, who played for the Seahawks from 2011–13. “We want to bring the Lord as much glory as possible.”

Torrey Smith, who was part of Baltimore’s championship team and spent two seasons with the San Francisco 49ers before coming to Philadelphia, was impressed by the young leaders on the Eagles.

“I think here the difference is a lot of younger guys lead,” Smith said. “As men, you tend to be very sheltered. If I am going through some things, I may not express that to the next man. Only you can expose your weaknesses and the things you want to work on, whether it’s in your relationship or your marriage or your family. When you’re able to talk about it among your brothers, among your family, it helps you grow. And when you realize that you can apply biblical principles to it, it helps us all grow.”

Stefen Wisniewski also played for other teams before joining the Eagles. He began his career with the Oakland Raiders and spent one year with the Jacksonville Jaguars before coming to Philadelphia in 2016.

“Obviously, there have been Christians before,” he said. “It’s just so special that there are so many on one team and so many that I would call committed or mature, who are believers, who are solid in their faith, and so many who are outspoken about their faith. There’s a lot of guys who would prefer to keep their faith private for whatever reason, and I think most of the Christians on this team have embraced the fact that we have a platform to share Christ. It’s a huge platform. Millions of people follow us. Let’s use it to lift high the name of Jesus. It’s so cool that so many guys have embraced that, and the fact that the quarterback is one of them, both quarterbacks, I think helps because that’s the most visible position.”

Before the Eagles drafted him, Wentz prayed daily that he would go to a team and be surrounded by guys who helped him grow closer in his relationship to Christ. He could not have imagined a better situation.

“Honestly, it’s been the most incredible thing being here with these guys in our locker room,” Wentz said. “I think a lot of people miss out, I know I did early in college to some extent, in understanding the true value of community, the true value of what we talked about — iron sharpening iron or spurring each other on. God Himself is God the Father, the Son, the Holy Spirit — three in one. He Himself is living in a relationship in a community. When Jesus sent out the disciples, He sent them out two by two because they need each other to spur each other on. And I think that we can all lose sight of that and say, ‘Well I’ve got my faith and you have yours, or I have this and you do your own thing.’ And that’s not what it’s all about, because life is hard. Life is messy. There are a lot of things that just aren’t good in life, and it’s easy to just get lost and wander. You always just need people to help keep you on the straight and narrow — keep you on that path and really encourage you. I just know how really beneficial it’s been in my life to have brothers in Christ and to really just help keep me on that path, and I really encourage [people] to kind of just check yourself to some extent and see who’s in your life. Are they building you up? Are they lifting you up? Are they spurring you on? Are they tearing you down? There’s value in iron sharpening iron.”

Accountability is an important part of the team’s brotherhood. Often those who walk closely with the Lord are going to be challenged by the enemy and pulled in the wrong direction, so having accountability partners is a vital part of the Christian journey. Being an accountability partner can be a tough job because sometimes it requires calling someone out — this should be done privately — and it could risk alienating a friend who doesn’t want to hear the truth. But several of the players on the Eagles had the courage to hold each other accountable, and equally important, they were willing to be held accountable. One player told me one of his teammates pulled him aside after he reacted angrily to questions from reporters and gently reminded him that it was important to represent Christ at all times. He thought twice about lashing out the next time he faced difficult questions.

“Even when we are not at Bible study, it is a fellowship,” Ertz said. “Those guys are holding me accountable. Off the field, I am holding them accountable as well. We truly care about each other, we truly care about the growth that each individual has in the Word, as believers, as well as friends and family. There are a lot of guys who are truly trying to boost me up along the way and keep me focused on the main thing, which is obviously the Word and Jesus.

“We probably have seven guys that we were really vulnerable with. When I go back to California sometimes in the offseason, the hardest part is being away from these guys because I don’t have someone walking the walk like I am so much as I do back in Philadelphia. If I am slipping up, Jordan [Hicks] is going to be there for me and say, ‘Zach, we need to talk about this,’ and the same thing with Jordan. We are able to be vulnerable because everything Jordan has gone through I’ve gone through at times; just that ability to hold each other accountable to something so much bigger than us.”

That strong desire to grow in their faith, to sharpen each other, to hold each other accountable helped this core group of players form an unbreakable bond.

“We wouldn’t be who we are, we wouldn’t be the men in Christ that we are without each other,” Hicks said. “I think community is such a powerful concept that Christ has given us and we are just so blessed to have. I look back on my past, and it is a miracle that I am with the Philadelphia Eagles. I’ve had so any different injuries, and there are so many different ways I could have fallen off, but the fact that we have such a community that we can bounce ideas off each other. We can dive deep; it is such a huge thing because being vulnerable with someone, you know they know everything, and it is a scary place to be. But when you go there, that is when the real change happens. You can hit those points that hurt. We’re lucky and blessed to be in the situation that we are and know that not everyone is in a locker room where they can have that type of access to each other every single day. We see each other every day all the time, and we are lucky to have that.

Community is such a strong concept that you know I think that every believer should have.”

Excerpted with permission from Birds of Pray by Rob Maaddi, copyright Rob Maaddi.

From the boardroom to the schoolroom, from gridlock to the gridiron we are all meant to do life together. We’re meant to live in community, holding one another up, holding each other accountable, being brothers and sisters. Family. Who are your people? Come share with us on our blog. We want to hear from you! ~ Devotionals Daily