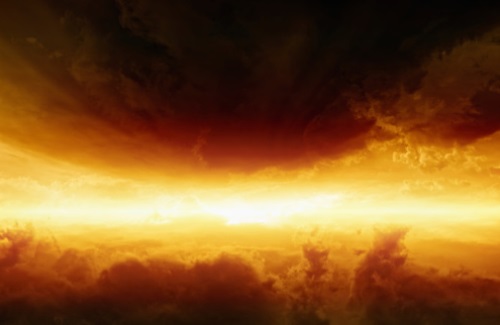 Is Hell Real? We haven’t heard much about hell since the “hellfire and brimstone” era of the church. Today, little if anything is spoken in churches about hell. So the question has become increasingly important: Is Hell Real? If it is, then where is hell, who goes to hell, and can we be saved after going there?

Historically, many views about hell have been spread within Christian circles. In his book, All You Want To Know About Hell, Steve Gregg explains the three most prominent views of hell:

A fourth position may well be the most universal of all. It would state that hell does not exist at all. How could a loving God send people to hell?

Is Hell real? Let’s look at the word’s origins.

The word translated as “hell” is the Greek word Gehenna. Gehenna is found twelve times in the Greek New Testament. James used it one time, and Jesus used it the other eleven. In All You Want To Know About Hell, Steve Gregg writes that the best way to answer the question, “Is hell real?”, is to observe the main usages of the word hell by Jesus. Looking at just the gospel of Matthew, we find Jesus spoke of hell seven times.

Is Hell real? What Jesus said about hell.

How do these verses answer the question: Is hell real? We know the word hell is in the Bible, but so many struggle in believing that a place like hell could actually exist. They would rather it be a metaphor for something else.

Is it possible that Jesus was somehow misled on the question of Hell?

For Jesus is not some high priest who has no sympathy for our weaknesses and flaws. He has already been tested in every way that we are tested; but He emerged victorious, without failing God. — Hebrews 4:15 (The Voice)

Son though he was, he learned obedience from what he suffered and, once made perfect, he became the source of eternal salvation for all who obey him and was designated by God to be high priest in the order of Melchizedek. — Hebrews 5:8-10 (NIV)

Is Hell real?  Yes. Why? Because Jesus said it was real, and we can trust his word.

Exactly where is Hell? Jesus gives one chilling clue: “outside”.

Outside of what? Outside of the boundaries of heaven, for one thing. Abraham, in paradise, told the rich man, in torment, “Between us and you there is a great gulf fixed, so that those who want to pass from here to you cannot, nor can those from there pass to us.” — Luke 16:26 (NKJV)

Hell is also outside the realm of conclusion. Jesus describes the length of heaven and hell with the same adjective: “eternal”.

“Hell lasts as long as heaven. It may have a back door or graduation day, but I haven’t found it.” — Max Lucado, God So Loved You

Why isn’t there a more accurate description of Hell in the New Testament?

There are two answers to this question:

The lingering question remains of how a loving God could send people to Hell. Is there deciding factor for those who go to Hell and those who go to Heaven? Certainly. It is found in John 3:18, a verse overlooked in favor of John 3:16, “He who believes in Him is not condemned; but he who does not believe is condemned already, because he has not believed in the name of the only begotten Son of God” (NKJV).

The question of which view of Hell is correct is up to a much more extensive study of the scripture. But the answer to the question, “Is Hell real?”, cannot be ignored. Hell is spelled out in the Bible, and Jesus, God in flesh, spoke about it continuously. The words of Peter add strength to the words of Jesus.

For if God did not spare angels when they sinned, but sent them to hell, putting them in chains of darkness to be held for judgment; if he did not spare the ancient world when he brought the flood on its ungodly people, but protected Noah, a preacher of righteousness, and seven others; if he condemned the cities of Sodom and Gomorrah by burning them to ashes, and made them an example of what is going to happen to the ungodly; and if he rescued Lot, a righteous man, who was distressed by the depraved conduct of the lawless (for that righteous man, living among them day after day, was tormented in his righteous soul by the lawless deeds he saw and heard)— if this is so, then the Lord knows how to rescue the godly from trials and to hold the unrighteous for punishment on the day of judgment. This is especially true of those who follow the corrupt desire of the flesh and despise authority. — 2 Peter 2:4-10 (NIV)