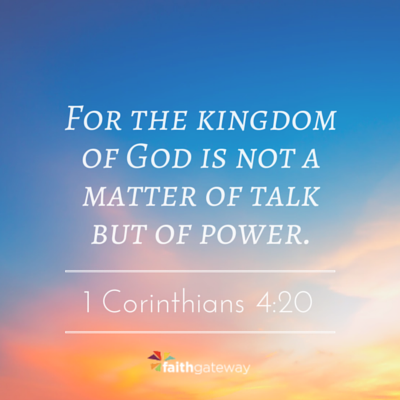 The kingdom of God is not the realm of grandiose talk; it is a realm of power. — 1 Corinthians 4:20 (The Voice)

1877: William Booth of the Salvation Army commissioned a young man with a colorful heritage to preach on this date: he was a gypsy, born in a tent a few miles north of London in 1860. Given the gypsies’ reputation, it is no surprise that this man, Rodney Smith, had been in jail more than once, but at age seventeen he was converted at a gospel meeting, turning his life around completely. Rodney, who had no formal education, taught himself to read the Bible, and he felt the call to preach. William Booth believed Smith was ready, and Smith began preaching on street corners and in mission halls. He made hundreds of converts and married one of them.

Soon “Gypsy” Smith, as he was called, became an independent evangelist and drew crowds all over Britain, America, South Africa, and Australia, and during World War I he preached on the front lines to Allied troops in France. He was a superb preacher and, true to the gypsy tradition, musically talented as well, and he would sometimes break into song at an appropriate point in his sermon. (Thanks to the Internet, recordings of his songs are readily available.) Time magazine ran a story on Smith in 1927, titled “Heart in Mouth,” reporting that Smith had made many converts in Chicago’s red-light district.

Few men ever entered the ministry with less education, yet no one could deny Smith’s power in the pulpit.

As he pointed out often, the way to Jesus was not through Oxford or Cambridge or Harvard but through Calvary. Also, “It’s the message that’s important, not the messenger.”

In 1917 King George V bestowed on him the Order of the British Empire — a remarkable honor for an unschooled gypsy boy who had done time in jail. Smith died in 1947 at the age of eighty-seven, having crossed the Atlantic forty-five times, a true “gypsy” for the gospel.

Prayer: Father, raise up voices of power to preach your truth to the nations. Amen.

Think about 1 Corinthians 4:20. Do you feel in some way inadequate sharing the Gospel? Not educated enough? Not eloquent enough? Not gregarious enough? God doesn’t need superstars to spread the Word; He needs you! Take a moment to pray for the Lord to embolden you and empower you to share your story with others. Please leave a comment on our blog. We would love to hear from you! ~ Devotionals Daily