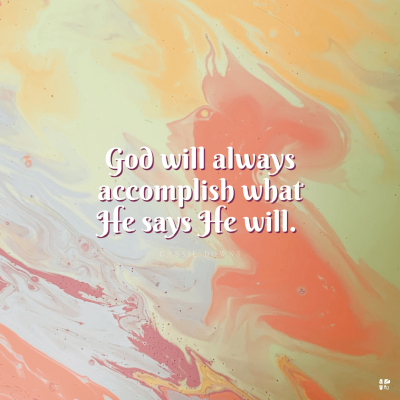 You may relate, but there are times that I struggle to keep the faith. Faith like that of the Shunammite woman. Have you heard her story? Let’s look.

“One day Elisha went to Shunem. A prominent woman who lived there persuaded him to eat some food. So whenever he passed by, he stopped there to eat. Then she said to her husband, “I know that the one who often passes by here is a holy man of God, so let’s make a small, walled-in upper room and put a bed, a table, a chair, and a lamp there for him. Whenever he comes, he can stay there.”

One day he came there and stopped at the upstairs room to lie down. He ordered his attendant Gehazi, “Call this Shunammite woman.” So he called her, and she stood before him. Then he said to Gehazi, “Say to her, ‘Look, you’ve gone to all this trouble for us. What can we do for you? Can we speak on your behalf to the king or to the commander of the army?’” She answered, “I am living among my own people.” So he asked, “Then what should be done for her?” Gehazi answered, “Well, she has no son, and her husband is old.”

“Call her,” Elisha said. So Gehazi called her, and she stood in the doorway. Elisha said, “At this time next year you will have a son in your arms.” Then she said, “No, my Lord. Man of God, do not lie to your servant.” The woman conceived and gave birth to a son at the same time the following year, as Elisha had promised her. The child grew, and one day went out to his father and the harvesters. Suddenly he complained to his father, “My head! My head!” His father told his servant, “Carry him to his mother.”

So he picked him up and took him to his mother. The child sat on her lap until noon and then died. She went up and laid him on the bed of the man of God, shut him in, and left. She summoned her husband and said, “Please send me one of the servants and one of the donkeys, so I can hurry to the man of God and come back again.” But he said, “Why go to him today? It’s not a New Moon or a Sabbath.”

She replied, “Everything is alright.” Then she saddled the donkey and said to her servant, “Go fast; don’t slow the pace for me unless I tell you.” So she came to the man of God at Mount Carmel.

So Elisha said to Gehazi, “Tuck your mantle under your belt, take my staff with you, and go. If you meet anyone, don’t stop to greet him, and if a man greets you, don’t answer him. Then place my staff on the boy’s face.” The boy’s mother said to Elisha, “As the Lord lives and as you yourself live, I will not leave you.”

So he got up and followed her. Gehazi went ahead of them and placed the staff on the boy’s face, but there was no sound or sign of life, so he went back to meet Elisha and told him, “The boy didn’t wake up.”

When Elisha got to the house, he discovered the boy lying dead on his bed. So he went in, closed the door behind the two of them, and prayed to the Lord. Then he went up and lay on the boy: he put mouth to mouth, eye to eye, hand to hand. While he bent down over him, the boy’s flesh became warm. Elisha got up, went into the house, and paced back and forth. Then he went up and bent down over him again. The boy sneezed seven times and opened his eyes. – 2 Kings 4: 8-35 CSB

In 2 Kings 4:17 God promised the woman a son which she gave birth to a year later. Years go by, and she watches her promise grow. Life was good until one day it wasn’t. The boy fell ill, and not just sick, but the Bible says, “he died.” What a blow that must have been. Her promise from the Lord was dead. The promise she had prayed for and cared for, the promise God didn’t have to give her but chose to give her.

Can you relate? Perhaps you’ve not lost a child, but you’ve lost a dream. You’ve heard the voice of God, stepped out in faith, only to find your dream looking lifeless?

John 16:33 reminds us that in this life, we will have trouble. Sometimes life throws us surprises, and not the good kind.

It could be a diagnosis, a financial struggle, a rebellious child, marriage issues, or a host of other things. No matter what problem has wedged its way between you and your promise, don’t start mourning just yet. It may not be as lifeless as it looks.

If you read on down, about 2 Kings 4:23, the Bible says, while the Shunammite woman’s son lay dead, she goes on her way, saying, “it will be well.” Call me crazy, but it doesn’t seem too well to me. Her son is dead. It’s over, let the tears flow! Nope. Not this momma. She responded with faith in the Promise-Giver. Momma was looking past her circumstances and straight at her promise. I hate to admit this to you, but too often I respond the opposite. I put more faith in my circumstances than I do in God’s promises. But I am learning that the way we react to our situations is often the very thing that determines whether our promise lives or dies. Had the Shunammite momma mourned her loss and never went to the man of God, her promise most likely would’ve died and stayed that way. There was no one else with the power to bring her son to life. And friend,

there is no one besides God that has the power to revive your promise.

My question for you is this: how are you responding? Where have you put your faith? In your circumstances or in the Promise-Giver? God wants to breathe life back into your promise, despite how things appear.

God will always accomplish what He says He will.

So my word that comes from my mouth will not return to me empty, but it will accomplish what I please and will prosper in what I send it to do. — Isaiah 55:11 CSB

Father, today I’m tired. I’m tired of the circumstances that lie to me and distract me from the promise You have for me. Lord, today I am choosing to trust Your word over my life and over my situations. I know that not one word from Your mouth will return void. Although things may LOOK lifeless, I am confident You can bring them to life again. Lord, I love You, and I wait for Your promise. In Jesus name. Amen.

Have faith in the struggle. Whatever it is that you are going through, keep your eyes on the Promise-Giver. What He allows may be confusing at times, but He is with you and for you. Wait for His promises. ~ Devotionals Daily