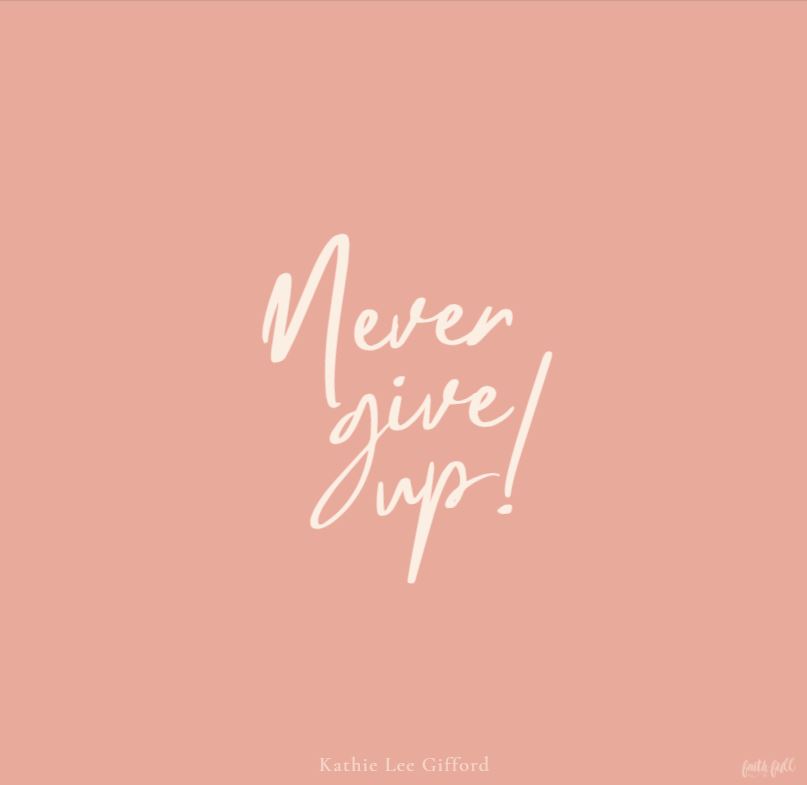 Lord, You have told me that if I have a need I should just ask it of You.
There is never too great a task for You.
So, Lord, now I’m asking You.

— “All That I Need” by Kathie Lee Gifford

With time and distance, and hopefully a dash of wisdom along the way, you’re able to see everything that has happened in your life with a new perspective. In your recollections of the past, a pattern emerges, and a distinct path forward eventually becomes visible.

When I left Oral Roberts University in 1975 to move to Los Angeles, I decided to give myself one year to make it in a business that I had already been warned was brutal. I found a tiny, cheap rental apartment and got a C-list agent to begin making the rounds. To say I was green would be like saying that spring comes after winter. Even with years of performance experience behind me, I was woefully ill-prepared for the critical beating you receive when you audition for commercials, film, television, or even industrial shows.

I felt like a raw piece of meat during each interview. Then came the inevitable, endless wait by the phone for the call from your agent telling you that you didn’t get the job.

I tried to convince myself it was all part of the learning process and that I would get better with each audition. But after six months, discouragement set in, which negatively affected my auditions. It was a perpetual Catch-22. My self-talk turned toxic.

You can do this, Kathie.
No, you can’t, or you would have done it by now.
You’re making a fool of yourself.
Your agent is going to dump you if you don’t book a job.
Your money is running out, and so is the clock on the year you gave yourself. Loser.

I paid the bills by appearing as an atmosphere person — essentially an “extra” — on Days of Our Lives and as the singer on Kathryn Kuhlman’s television program I Believe in Miracles.

Kathryn Kuhlman was a well-known and controversial faith healer at the time who had quite the following. She was unusually eccentric and a little frightening to me. I had to audition for her, and I chose to sing “What a Friend We Have in Jesus,” “How Great Thou Art,” and “Amazing Grace,” while she silently bore a hole into me with her steely eyes. After I finished, I held my breath. Kathryn Kuhlman glided over to me in her satin gown, took my face in her hands, pulled me close, and declared, “It’s adorable.”

I sang on her show every Sunday for the whole year, and I don’t remember her saying one more word to me. The gig paid the bills, but it certainly wasn’t taking me any closer to my mission of making it as a legitimate talent in Hollywood.

About nine months into my first year in Hollywood I began to get a little notice in the commercial world. I was getting callbacks, meaning casting agents would call my agent to schedule me for a second audition. This happened over and over for a few months. The same people were often in the waiting rooms with me, yet it seemed the jobs always went to actress Nancy Morgan. I wished to know her secret. What magic did she have that I lacked?

I frequently wanted to give up, go home, and become a florist or something else less stressful. Then I’d get a fresh burst of courage and yell out loud to myself, “Come on, Judy [a la Garland], let’s put on a show!”

Despite my attempts to stay optimistic, I cried myself to sleep many a night, pleading with the Lord to break through for me. Finally, I had to get a real job, so I began working as a hostess at the El Torito Mexican restaurant on Ventura Boulevard in a neighborhood outside of Los Angeles. Honest work, of course, but depressing.

Then someone told me about a job in Vegas that had just opened up. One of the singers in a group called the Windsong Trio had dropped out of a show that was scheduled to open at the Landmark Hotel. The producers were frantic to find someone who could learn the show immediately and open in forty-eight hours. I never stopped to think how impossible that was. I was young and ignorant and desperate to actually work doing what I had longed to do my whole life.

I took the job, learned the show, and performed three times a day for the longest month of my twenty-two years on this planet. I was miserable. I was sharing a room with the other two Windsong singers: a Baptist preacher’s daughter and an ex–beauty queen. They were both nice enough, but the craziness began each night after the third show. I’d head to bed, exhausted, and the two girls would head out for a fun-filled night of God knows what. Then I’d get up at about five in the morning just as they were returning. I admired their stamina but remember feeling deeply saddened that they were partying night after night.

This show finally came to a blessed end, and I returned to LA to continue auditioning for work. I was one week away from my self-imposed deadline of one year to “make it” when I auditioned for six new commercials. As per usual, perfect Nancy Morgan was at each audition, probably already counting her residuals.

To my utter astonishment I was chosen for five of the six commercials, but due to scheduling conflicts, I could only book three of them. I cried into the phone when I called my parents to tell them that I was actually, finally, on my way to a real career.

I shot the commercials one after the other and took great pleasure in smiling at Nancy Morgan, who was also cast, during each one. She smiled right back, as if to welcome me into the inner sanctum. It felt good. Commercials paid my bills, but they didn’t really build my career. I needed to break into a series of some sort where I could gain stability in this crazy, completely unpredictable industry.

I tried out for a children’s show and was convinced I nailed it. The head writer kept smiling at me and nodding his approval, but once again my agent had to deliver the news that I hadn’t gotten the job. Not even a callback.

It seemed I was in the wrong business. I thought, If I’m not right for a simple children’s show, what am I ever going to be right for?

My agent called one day soon after to say, “Kath, they want to see you for a new game show over at Ralph Edwards Productions. Have three songs ready.”

When I arrived at the audition, I thought someone had made a mistake. There was no one else waiting with me. I double-checked the address and time I had written down. Yes, I was in the right place, right on time. Suddenly a young woman appeared.

“Yes,” I answered. “Where is everybody?”

I followed her into a large conference room full of people I’d never seen before. Except for one: the head writer of the children’s show that I’d thought for sure I was going to get a month before. His name was Gary Bloom, and he smiled a big smile and winked at me.

What is going on? I wondered.

All I could do was launch into the songs I’d prepared. I had barely finished the last one when the legendary producer Ralph Edwards walked over to me to shake my hand.

“Welcome to Ralph Edwards Productions.” He smiled graciously. “Welcome to Name That Tune.”

I was stunned. In an instant, my entire life changed. The trajectory of my career went through the roof and nothing would ever be the same. That’s showbiz.

As it turned out, Gary Bloom had told my agent that while he had loved my earlier audition, he thought I was too sophisticated for the children’s show. But he was working on another show that he was sure I’d be perfect for.

He was right. I learned two hundred songs in five days and shot the shows for the entire year in a few weeks.

We taped at the NBC Studios in Burbank right next to The Tonight Show, and, finally, I thought, So this is what it’s like to make a living doing what you love to do.

As I walked through the gate for the first time with my agent and parents, past the security guard who greeted me warmly, I whispered this prayer:

“Dear Jesus, I know my life is about to change. Thank You, Lord, for this amazing new chapter in my life. Please help me to treat every single person I meet exactly the same — from the executive producers to the guard at the gate. And I will give You all the praise.”

I squeezed my daddy’s hand. He was still smiling because the guard had confused him with one of his all-time heroes, Roy Rogers.

“Thank you, kindly,” my daddy had responded, never letting on. We giggled.

A few weeks later we wrapped the season, and I headed to the car in the parking lot feeling elated. It had gone well. I hadn’t made one mistake in two hundred songs. I was on my way. My daddy came up after me, and the same security guard stopped him.

“Mr. Epstein,” he said, “I just want you to know that every time your daughter came through the gate, love came with her.”

“Thank you, kindly,” my daddy answered with tears in his eyes.

Thank You, Jesus, for the reminder that it’s never too late to never give up.

Don’t give up! If you’re going for something, a goal, a mission, a ministry, or whatever it is, ask the Lord for help and then keep going! Come share your thoughts with us on our blog. We want to hear from you! ~ Laurie McClure, Faith.Full