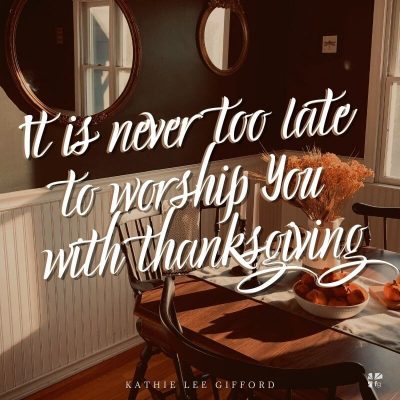 Enter His gates with thanksgiving
and His courts with praise;
give thanks to Him and praise His name.
For the Lord is good and His love endures forever;
His faithfulness continues through all generations.

In October 2018, I was in Nashville working on the music for my movie Then Came You. My dear friend Angie had set up a write for me with artist and songwriter Nicole C. Mullen — a GRAMMY-nominated artist who had won multiple Dove Awards and was highly respected in the music and gospel worlds.

For no apparent reason, I’d been mindful of the biblical character of Hagar. Hagar was the Egyptian handmaiden of Sarah, Abraham’s barren wife, who, after a bitter fight with Sarah, was abandoned with her son, Ishmael, in the wilderness. It’s one of the most disturbing accounts in the story of Abraham and Sarah but, like every story in the Bible, all too human.

The other odd thing that had captivated me was a verse from Zechariah:

I… will be a wall of fire around her, and I will be the glory in her midst. — Zechariah 2:5 NASB

The sheer poetic beauty of these words stunned me and lingered with me. They were especially on my mind and heart the day Nicole arrived for our write.

In the next hour I discovered that the Lord had recently placed Hagar on Nicole’s heart as well. We agreed to write about her, incorporating the Zechariah scripture that He had revealed to me into the chorus. It was an easy, creative ebb and flow, and we ended our short session satisfied that we had the genesis of a solid song. We agreed that I would work on finishing the song while Nicole was traveling abroad.

Back in Connecticut, I began working and I didn’t stop with Hagar; I wrote about Ruth, then David, and finally Mary Magdalene. Though it was not logical, I felt compelled to write it this way — a leading from the Lord that I’ve learned to obey. Then I set it aside until Nicole and I could reconnect and decide where to take it next.

We met a couple of weeks later at the studio of my producing partner, Sal Oliveri, to record a demo. By now it was obvious that we had written a piece of theater, which needed a narration. This kind of piece was new for Nicole. When I asked her to go into the recording booth and, with no script, simply introduce each character before she started singing about them, she looked at me with big, terrified eyes and said, “Oh, Kathie, I can’t do that. I don’t do that.”

“No, Nicole,” I told her. “It’s not that you can’t do that, it’s just that you’ve never done it before. You know the Bible so well, just recount what you know about these characters and set the scene for us.” She finally agreed to try. Nicole stood in front of the microphone, Sal sat down at the keyboard directly across from her, and we began.

Nicole said these five simple words: “Hagar was a single mother.” And boom! She didn’t stop for the next eleven and a half minutes. When she finished, Sal and I sat for a moment in hushed awe. Then I fell on my face thanking and worshiping God. Eventually I got up and walked over to where Sal was still sitting at the keyboard, his fingers trembling and tears streaming down his face.

Nicole was overwhelmed as well. “Nicole,” I said to her, “that was anointed of the Holy Spirit. There’s no other way to explain what just happened.” She nodded and said, “I know.”

After very few changes to what she had both said and sung, we knew we had the final version of The God Who Sees. It was not your typical song length, but it was full of power and truth.

I was convinced Nicole’s performance deserved to be showcased musically and decided right then to record it with musicians from the Nashville Symphony. The only logical step from there was to take our work to Israel and film this magnificent artist in the land where all the stories had actually happened. For four days, I directed as we filmed in the extraordinarily majestic, desolate, vibrant, resplendent promised land of my forefathers.

I felt reborn all over again and filled with thanksgiving. I was completely aware that every gift and every dream my Creator had placed in me in my mother’s womb was finally being birthed. Everything I’d ever discovered and learned during every moment onstage, in front of cameras, microphones, audiences, and critics, was culminating in this experience. It was beyond humbling. It was beyond thrilling.

The God Who Sees was released to unbelievable critical acclaim. But more importantly, it went into millions of homes and millions of hearts and changed thousands of lives. We know that from the comments we’ve received on YouTube.

The story of Hagar can remind to you that it’s never too late to see God use you and to thank Him. I know this is true because two women who love Jesus sat down to write a song about another woman who thought nobody loved her, they followed in her footsteps into the literal and metaphorical wilderness, and incredible miracles took place. I am forever thankful for the gift of this experience that God gave to us.

Thank you Jesus for providing us with opportunities, gifts, and abilities to honor and glorify You. Thank You that it is never too late to worship You with thanksgiving for using us! Amen.

Today in the United States, it’s Thanksgiving. But, no matter where you are today, we can join together spiritually to praise the Lord and glorify His name. What are you thankful for? Come share with us! ~ Devotionals Daily