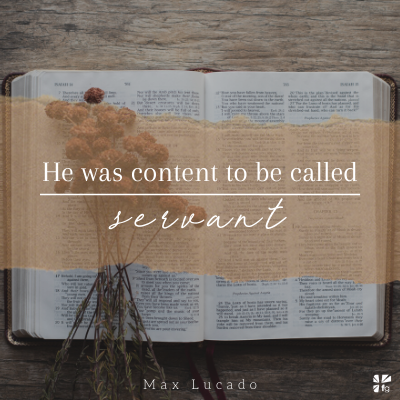 Through love serve one another. — Galatians 5:13

I remember him as a large man, built like a concrete block. He wore a crew cut, neckties, and short-sleeved white shirts with an ever-present pocket protector. I was one of four fourth-grade boys who attended his Bible study each Wednesday at the Parkview Church of Christ in Odessa, Texas. The classroom held at least a dozen desks. I do not remember the teacher’s name. Nor do I recall any details about his life. Was he a plumber or a postman? I have no idea.

What I recall with startling detail is the evening of February 10, 1965. He attempted to teach his handful of ten-year-old boys the meaning of the seventh chapter of Romans. That is the section in which the apostle Paul confessed the civil war that raged within his heart. The topic was a heavy one for a covey of kids. When he talked about a troubled conscience and the need for forgiveness, I took note.

I gave the teacher no reason to think the class had made an impression on me. I didn’t ask any questions or thank him for his words. He likely went home with little or no understanding of the impact of the lesson. If his wife had asked him, “How was your class?” he would have shrugged and said, “I dunno. Those kids don’t talk much.” What he didn’t know is that the freckle-faced redhead on the second row was listening.

That night I stepped into my father’s bedroom and asked him about Heaven. Dad took a seat on the edge of the bed and invited me to join him. He told me about grace. I asked Jesus to forgive me.

The following Sunday I was baptized. A new me began.

Over the years I’ve often thought about that teacher. He wasn’t a pastor. He wasn’t dynamic. He was prone to fumble over his words. He didn’t have a title, seminary degree, or reserved parking place. He never filled a stadium. As far as I know, he never planted a church. He wasn’t an expert on church growth or how to solve world hunger. If he left a sizable donation to a nonprofit in his will, I never heard about it. Yet his teaching rerouted my path.

I’ve not seen him since, but I’ve seen thousands like him. Quiet servants. The supporting cast of the kingdom of God. They seek to do what is right. They show up. Open doors. Cook dinners. Visit the sick. You seldom see them in front of an audience. That’s the last place most of them want to be. They don’t stand behind a pulpit; they make sure the pulpit is there. They don’t wear a microphone but make certain it’s turned on.

They embody this verse:

For you, brethren, have been called to liberty; only do not use liberty as an opportunity for the flesh, but through love serve one another. — Galatians 5:13

These words appear toward the end of a document on liberation. For five chapters the apostle Paul proclaimed, “You are free! Free from sin. Free from guilt. Free from rules. Free from regulations. The yoke of slavery is off, and the liberation has begun.”

Our freedom, however, is not an excuse for us to do whatever we want. Just the opposite.

Because we are free, we can serve.

We voluntarily indenture ourselves to others. In a society that seeks to be served, we seek opportunities to serve others.

Andrew was such a servant. He was the brother of Peter. He came from the same town as James and John. Yet when we discuss the inner circle of Peter, James, and John, we don’t mention Andrew. His name never appears at the top of the list of leaders. He lived in the shadow of the others. In the group photo he stood at the side, hands in pockets. Then again, he probably held the camera.

Quiet, however, does not mean complacent. Just because Andrew avoided the limelight, that doesn’t mean he lacked fire. He led his brother Peter to Jesus. Peter went on to preach the first sermon. Peter led the Jerusalem church. Peter took the Gospel to Gentiles. He wrote epistles that we still read. He defended the apostle Paul. Anyone who appreciates Paul’s epistles owes a debt of gratitude to Peter. And anyone who has benefited from the rocklike faith of Peter owes a debt to the servant spirit of Andrew.

And it was the servant spirit of Mary that led God to select her to be the mother of Jesus. She wasn’t a scholar or a sophisticated socialite. She was simple. Plain. A peasant. She blended into the crowd. She hailed from Nazareth, a dusty village in an oppressed district in Galilee.

In the social strata of her day, Mary occupied the lowest step. As a Jew she answered to the Romans. As a female she was subservient to males. As a young girl she was second to older women. She was poor, so she was beneath the upper class.

Mary was extraordinarily ordinary. Yet this virtue set her apart:

When God wants to bring Christ into the world, He looks for servants. No diploma required. No bloodline specified. Bank accounts are not a factor. Place of birth doesn’t matter. Let all unassuming people of the world be reminded: God can use you.

In one of His appearances to His followers, they were on the Sea of Galilee when they heard Him call out from the shore. When He told them where to find fish, they realized it was Jesus. Peter plunged into the water and swam to shore. The other disciples grabbed their oars and paddled. When they reached the beach, they saw the most extraordinary sight. Jesus was cooking! He told them,

Shouldn’t the roles be reversed? Jesus had just ripped the gates of hell off their hinges. He’d disemboweled the devil. He’d made a deposit of grace that forever offsets our debt of sin. He’d sentenced the demons to death row and set free every sinner since Adam. He, the unrivaled Commander of the Universe, wore the apron?

Even more, He has yet to remove it. He promises a feast in Heaven at which

He will gird Himself and have them sit down to eat, and will come and serve them. — Luke 12:37

Can you imagine the sight? Row after row of food-laden tables. The redeemed of the ages celebrating and singing, and someone asks, “Has anyone seen Jesus?”

“Yes,” another replies. “He’s on the other side of the banquet room serving ice tea.”

Christ Himself was like God in everything.But He did not think that being equal with God was something to be used for his own benefit.But He gave up His place with God and made Himself nothing. He was born as a man and became like a servant. — Philippians 2:6-7 NCV

Suppose you took that role. Be the family member who offers to wash the dishes after dinner. Be the colleague who serves the staff by arriving on time for each meeting and listening attentively. Be the church member who supports the pastor with prayer and notes of encouragement. Be the neighbor who mows the grass of the elderly couple.

Can you imagine the joy-giving benefits of these decisions?

Of course you can! You’ve experienced it. When you took a pie to the sick coworker or sang a song to the sick child, were not both of you encouraged because of it? You’ve been unScrooged from stinginess enough times to know the easiest way to make yourself smile is to make someone else smile first.

And if you give yourself to the hungry And satisfy the desire of the afflicted, Then your light will rise in darkness And your gloom will become like midday. And the Lord will continually guide you, And satisfy your desire in scorched places, And give strength to your bones; And you will be like a watered garden, And like a spring of water whose waters do not fail. — Isaiah 58:10-11 NASB, emphasis mine

What would happen if everyone took on the role of a servant? How many marriages would be blessed? If politicians set out to serve their people more than serve themselves, would their country benefit? If churches were populated by sincere servants, how many ten-year-old boys would hear the invitation of a lifetime?

In the hallway of my memory hangs a photograph. It’s a picture of two people — a man and a woman, a couple in the seventh decade of life. The man lies in a hospital bed. But the hospital bed is in the living room, not in a hospital room. His body, for all practical purposes, is useless. Muscles have been so ravaged by ALS that they’re stretched from bone to bone like the taut fabric on the spokes of an umbrella.

He breathes through a hose attached to a hole in the base of his throat. And even though his body is ineffective, his eyes are searching. They scan the room for his partner, a woman whose age is concealed by her youthful vigor. Her hair is gray, but she’s vibrant and healthy in contrast to the figure lying in the bed.

She willingly goes about her task of the day: taking care of her husband. With unswerving loyalty she does what she’s been doing for the past two years. It’s not an easy assignment. She must shave him, bathe him, feed him, comb his hair, and brush his teeth.

She holds his hand as they sit and watch television together. She gets up in the middle of the night and suctions his lungs. She leans over and kisses his feverish face. She serves him.

She carries on the lineage of Andrew and Mary.

By the time my father took his final breath, the two had been married for more than four decades.

On the day we buried him, I thanked my mom for modeling the spirit of Christ: quiet servanthood.

Advent begins tomorrow. As we look forward to celebrating the birth of our Savior, let’s keep our eyes open to the ways that we can serve! What better way to honor the King who still has His apron on?! Come share your thoughts with us on our blog. We want to hear from you about the happiness that serving brings! ~ Devotionals Daily