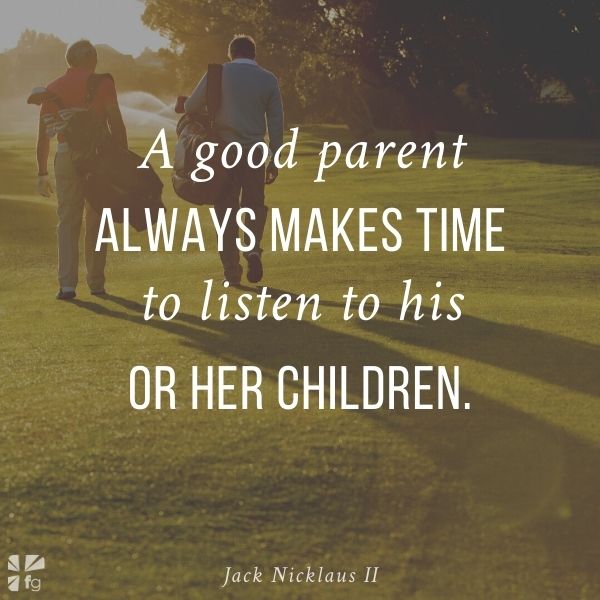 As parents, we are often living lives filled with distractions, emotional challenges, and professional and personal disruptions. No matter what you face, take every opportunity you are given to listen to your children. My dad did that so well — even when his career was at its peak and he was traveling so much — and his actions toward me taught me to listen to my own children.

On Father’s Day in 1980, Jack Nicklaus was doing what he loved most — being a dad.

And I — eighteen years old at the time — was being selfish. I had just completed my second round in a Palm Beach County Junior Golf Association tournament at the Osprey Point Golf Course, located in Boca Raton, Florida, a few miles from our home in North Palm Beach. I was at the scorers’ table that late Sunday afternoon signing my scorecard when somebody yelled over to me that my dad was on the telephone.

I was a little frustrated about the timing of the call because the tourney was still being played. At that moment for me, this junior golf tournament was the most important thing going on in the world. I had just graduated from high school and signed a golf scholarship to play at the University of North Carolina.

I picked up the telephone receiver. Dad asked me how I played.

Well, I hadn’t scored very well, but I proceeded to describe my entire round, hole by hole, shot by shot, whether I lifted my head during a swing, misread a putt — whether it went left instead of straight — or if the ball slowed against the grain.

Literally, I went on and on for twenty straight minutes.

Dad listened, patiently and intently. He responded with questions about why I thought I might have made certain mistakes as I rehashed my eighteen holes. When I told him I was having problems with my chipping, he promised we’d work on it when we both got home. He was so interested, generous, and genuinely wanted to hear about it. All of it. As I finally finished, there was a short silence. I was about to thank Dad for calling me and say goodbye.

Then Dad said, “Jackie, would you like to know how your dad did today?”

A little embarrassed, I quickly said, “Well, yes, how did you do today?”

The Golden Bear had just set a new tournament scoring record to win his fourth U.S. Open title at Baltusrol Golf Club in Springfield, New Jersey. And he was on the telephone, some twelve hundred miles away, asking me how my round went at a junior golf tournament.

I didn’t realize it at the time, but Dad taught me a valuable lesson that Father’s Day. It’s a lesson that I have grown to understand and tried to incorporate into my daily life as a husband and father to five children.

That junior golf tournament has no meaning for me to this day. But Dad’s telephone call still resonates deeply.

A good parent always makes time to listen to his or her children.

It’s not as easy as it sounds.

Dad could have quickly changed the direction of our conversation that Sunday afternoon forty years ago. That was a big, big day for him, having not won a tournament in 1979, the first year in seventeen he had gone winless as a professional. The experts and pundits believed, at age forty, he was past his prime. But minutes after making history, with a new scoring record, he telephoned me to see how I had played.

That is just one of many examples throughout my life when Dad made me his top priority. He always made a point to arrange his schedule to meet mine. Just as important, Dad was always there to listen.

Of course, there are other moments when Dad was equally giving of his time with me, but I just ignored many of those opportunities, which are lost forever. Parents can relate, but most teenagers can’t see past their own noses. Trust me. I was one of those teenagers.

When I was fourteen, my buddy Gene Sowerwine and I were supposed to play eighteen holes with our fathers. Gene and I arrived at the course before Dad and Mr. Sowerwine. I don’t recall, but I suspect both were still at work. Anyway, Gene and I tossed our golf bags on our shoulders and started our round as a twosome without them.

We were on the 2nd green when we noticed that Dad and Mr. Sowerwine had teed off and were a hole behind us. To this day, I don’t know what goes through a young kid’s mind. Gene and I thought if they really wanted to play the round with us, they’d speed up and catch us. We continued our round, even playing faster. While they also picked up their pace, we stayed a hole to a hole and a half in front of them, until the 11th tee box.

I greeted Dad with a big smile and said hello. Gene and I figured they’d be happy to join us. Think again.

Dad and Mr. Sowerwine barely acknowledged us. Dad looked at me and said, “The two of you are obviously enjoying yourselves as a twosome, so we will just play through and not interrupt your day.” They teed off and played through in front of us.

Gene and I looked at each other. I am not sure I realized it immediately, but, boy, our decision not to wait for our dads was a bratty thing to do. I then realized the only reason Dad rushed from the office to get to the golf course was to spend time with me. And I know Mr. Sowerwine wanted to spend time with Gene too.

It is both amazing and appalling how I treated my dad that day, not only disregarding the time and effort he took to be with me but disrespecting him as well. Kids! Yes, I was a typical kid who thought only of himself and gave no thought to another person’s interests, and, in my case, I intentionally and blatantly ignored Dad. That never happened again.

As each of my children hit the stage when he or she might have acted as I did on that course, I made sure to casually tell them that story, hoping they would listen and learn.

My five children — Jack III, Christina, Charlie, Casey, and Will — are each in different chapters of their lives. I have always tried to take the time to offer advice when asked or when I felt it was appropriate. I have also learned from them and love each one dearly.

The best way to describe the interaction I share with my children is active. Introduce each child to just about everything possible. Let them find their interests or passions, and support and encourage them to follow their dreams. I remember many times we spoke about the direction of their lives. I explained that if they were able to find something they loved to do in the classroom, on the athletic field, and in life, they would be amazed how good they would be at it. I can tell you that Dad found his passion in golf, and he felt as though he never worked a day in his life (at least on the golf course). A follow-up message I preach to my children is mostly about their effort. They know that whatever direction they choose in life, they need to give it their all.

Like you might imagine with five kids, I had to learn to listen to each one differently. As I’ve said, I wanted to take every opportunity to listen to them.

And, like Dad, I always learned from listening to my children.

Are you a father? How can you show love to your children by listening? We’d love to hear your thoughts in the comments!