It started with a simple question: How can we help them? It became an international movement called NEGU: Never Ever Give Up. When Jessica Joy Rees was diagnosed with an inoperable brain tumor at age 11, she chose to focus not on herself but on bringing joy and hope to other children suffering from cancer. During the ten months she battled cancer, she and her family worked in the “Joy Factory” (originally their garage) making JoyJars®—packages filled with toys, games, and love for other kids with cancer. Jessie first handed them out personally at the hospital where she was being treated, but the effort blossomed quickly and there were soon thousands of JoyJars® being distributed across the United States and to over fifteen countries. Today, more than 100,000 kids have received JoyJars®, and they continue shipping each week to kids in over 200 children’s hospitals and 175 Ronald McDonald Houses.

Jessie lost her battle with cancer in January 2012, but her message lives on in the new book, Never Give Up. Today’s FaithGateway Family presents an exclusive excerpt from this touching and inspirational book by her father, Erik Rees.

I started the engine and drove through the parking lot toward the exit, turning on the stereo to let the sounds of worship music fill the silence. We passed rows of windows – hundreds of kids in those rooms, all fighting cancer. Why were there so many of them? It wasn’t right.

“When do the other kids get to go home?” Jessie asked.

Jessie was quiet for a minute, and then came her little voice from the backseat:

How can we help them?

“They’re going through a lot. What can we do for them?”

I looked over at my wife, who wiped a tear from her eye. There weren’t any words.

We were battling cancer. I didn’t even have any real concept that the earth was still rotating on its axis, let alone that other people still existed. My focus was entirely on my family and getting us through this fight. I thought it was sweet that Jessie was thinking of other kids — it was entirely her personality to do so — but I really just gave it a superficial acknowledgment at the time. I had no idea that those simple words of Jessie’s were going to change the course of our family’s life forever.

After we got home that day, Stacey and I retreated to the office to “check in,” which would become our regular habit after doctor’s appointments and treatments. We’d spend a few minutes with the door closed, discussing anything new the doctor had said and making sure we were on the same page.

Then we went into the kitchen to prepare dinner, where we found Jessie sitting at the counter with about a dozen brown paper lunch bags laid out across the counter. She was decorating the bags with stickers, foam letters, and markers, writing things like “Get well soon,” “Don’t stop believing,” and “Hope you’re okay.”

“Jess, what are you doing?”

She looked up only briefly, then deposited one of her Beanie Babies into the bag she had just finished decorating. I looked at the pile of Beanie Babies next to her and realized she was about to give away her whole collection.

“You’re serious about helping the other kids.”

I scratched my head. I was a pastor. Helping was what I did, but I never pressured my kids to be extra charitable or “perfect.” I didn’t want my position to put higher expectations on them. Of course I wanted to rear loving and caring kids, but I also wanted to allow them the freedom to be kids. Here was Jessie, though, choosing to help those who were less fortunate, even when she was, to most others, the “less fortunate” herself.

That night, Jessie felt lucky to be sleeping in her own bed. She had just learned that the kids on the third floor at CHOC weren’t so lucky. They were in an unfamiliar place filled with monitors and bright lights and the smell of disinfectant, instead of experiencing the comfort of home with two dogs, two siblings, Mom and Dad, and their own fluffy blankets.

Life became so simple that day.

Jessie felt lucky. She was scared, but she’d already found a purpose. I decided to ride in her wake and feel lucky too. All of my family was together that night. We were all under the same roof, and we were all okay. From then on, life would always be that simple. Every day that Jessie was alive was a good day.

Excerpted with permission from Never Ever Give Up: The Inspiring Story Of Jessie And Her JoyJars by Erik Rees, copyright Zondervan, 2014. 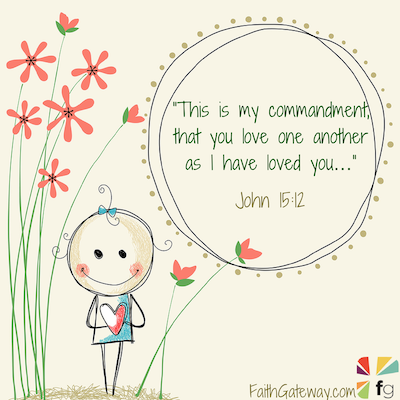 Are you in the middle of the battle of your life? What question would change your life today? “How can I help?” Whom around you in similar or worse circumstances can you help? 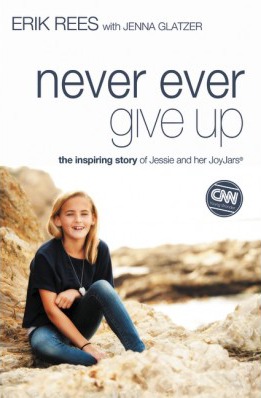