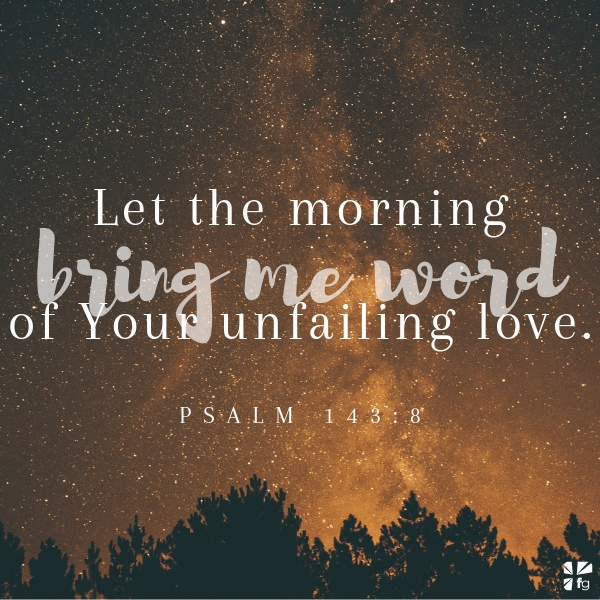 I remember the days of long ago; I meditate on all Your works and consider what Your hands have done. I spread out my hands to You; I thirst for You like a parched land. Answer me quickly, LORD; my spirit fails. Do not hide Your face from me or I will be like those who go down to the pit. Let the morning bring me word of Your unfailing love, for I have put my trust in You. – Psalm 143:5-8

Thomas burst into his home as evening shadows fell across the threshold. He quickly shut the door behind him and began to sob. Sweat beaded along the back of his hand as he struggled to secure the lock with trembling fingers. After several attempts, the bolt slid into place at last.

He turned to lean against the door and slowly slid to the floor. Jesus, Thomas’s Rabbi, his Messiah, was gone. The world had turned upside down in a flurry of betrayal and injustice until Golgotha lay awash in the blood of his Friend. Jesus had been tortured to death, nailed to a Roman cross.

Thomas moaned and then stood to his feet. He climbed the short flight of stairs that led to the main room of his small home. He began moving each chair and bench against the wall where he turned them upside down, the tradition mandated for a home in mourning. When he was finished, he sat down on the floor, placed his forehead on his knees, and wept as the room grew dark and night fell.

Thomas spent two more days in solitude. His only companions were the shifting shadows that marked the passing hours and the horrific images of Jesus’ wounds that tormented his dreams. The other disciples had drawn together, seeking the comfort of one another’s company. He knew he was welcome to join them, but it was his nature to seek quiet while he waited for some measure of calm to return to his soul.

As the moments stretched into hours and then days, Thomas kept vigil for his Friend as he poured out his grief to God alone. The third day rose and passed as the previous two in quiet remembrance, desperate weeping, and the futile struggle to understand such devastating loss.

Then, the silence was shattered.

Loud fists fell on his door as shouts rang out in the night. “Thomas, Thomas! Open the door. It is us!”

He rushed to the door in response to the familiar voices of Peter, James, John, and the others. The moment he slid the lock open, the men filled the entry hall.

John stepped forward and pulled Thomas into an embrace before passing him off to James. He too pulled him near, and then held him at arms’ length as he beamed into Thomas’s bewildered face.

“Thomas, we have just seen the Lord. He lives!” he said.

Thomas felt his face flush as a roaring filled his ears and his vision began to dim. He stumbled backward and sat down on the stairs directly behind him. He leaned forward for a moment and took a few deep breaths to calm himself as the crowd of men quieted in front of him.

Could it possibly be true? But I saw the wounds…

Thomas stood, braced his right hand against the wall, and then climbed the stairs as the men followed. He took a few halting steps forward and sat down on the floor. His friends filed into the room and walked to the wall to turn the benches and chairs upright before taking their seats.

The room grew quiet as everyone waited for Thomas’s response. After a moment, he turned to them. “I don’t understand. What are you saying?” he stammered.

John began. “It has been an eventful day, friend. This morning, Mary Magdalene came to us and told us she had been to the tomb and that Jesus’ body was gone. Peter and I ran to the garden to see for ourselves. We found the tomb empty. The body was missing, but the grave clothes had been left behind. We didn’t know what to think. Mary Magdalene stayed behind at the tomb after we left. A while later she came to us once again, this time saying she had seen the Lord after our departure from the garden. She said He was alive!”

Luke joined in next. “Later in the day, Cleopas and I were walking to Emmaus when we were joined by Someone we at first thought was a stranger. As we walked, He began explaining how the prophets had foretold all that would happen to Jesus. We were absolutely captivated! When we arrived at home, we asked Him to stay for dinner, and He agreed. When we sat down to eat, He took the bread, gave thanks, and broke it. Suddenly, our eyes were opened. It was Him — Jesus! And then He was gone. He simply disappeared. Of course, we rushed back to Jerusalem to tell the others.”

Peter continued the narrative. “We were all gathered together with the doors locked, for fear of what the Pharisees might do next,” he said. “Suddenly Jesus was standing right there in the room with us. He said, ‘Peace be with you’ (Luke 24:36). We were terrified, I tell you. We thought it was a ghost. He said, ‘Why are you troubled, and why do doubts rise in your minds?’” (Luke 24:38).

Peter shook his head, and when he continued, his voice was quieter. “Then He held out His arm to us and lifted the sleeve of His robe to show us the scar left behind where they nailed Him to the cross.”

Thomas’s eyes filled with tears as Peter finished speaking. He so desperately wanted it to be true.

He was a man of facts and measures. He was willing to die for what he knew, but how could he reconcile the horrors of the cross with this proclamation of life?

In Thomas’s absence, Jesus had shown Himself to the other men and allowed them to touch Him. He wanted the same proof. His broken heart couldn’t risk so precious a hope only to find it was a misunderstanding or illusion.

He looked at his friends and then quietly spoke.

Unless I see the nail marks in His hands and put my finger where the nails were, and put my hand into His side, I will not believe. – John 20:25

An awkward silence settled over the room as the men looked at each other uncomfortably. John took a deep breath and knelt before Thomas.  He placed a hand on his shoulder and said, “I am sure you will get that chance very soon, friend. Now, please, come with us. It is not good for you to stay here alone any longer.”

Thomas nodded and stood as his friends rose to leave. When he reached the entrance of his home, he paused for a moment and took a final look back before extinguishing the oil lamp that rested in its niche in the wall. Then he closed the door behind him and followed the other men into the night.

A long week of waiting passed. The men prayed and shared hopes of what was to come, but as each new evening fell with no additional appearance of Jesus, Thomas grew anxious and impatient. On the morning of the eighth day, he stood at the window watching a steady stream of pilgrims prepare to leave Jerusalem and return home at the conclusion of the feasts. He sighed in frustration. It was time for them to begin their journey to Galilee, and still there was no sign of Jesus. He walked over to the closed door and placed his hand on the threshold before leaning his forehead against the rough wood.

If Jesus is really alive, why has He not shown Himself?

Suddenly there was a chorus of exclamation behind him.

Thomas turned to see Jesus standing in the middle of the room!

As the other disciples gathered excitedly around Him, He smiled at them.

Jesus turned to look across the room at Thomas. His smile softened. He held His arm out to Thomas as He rolled up the sleeve of His robe to expose a dark red scar. He took a few steps toward Thomas, and when He spoke, His voice was filled with compassion.

Put your finger here; see My hands. Reach out your hand and put it into My side. Stop doubting and believe. – John 20:27

A sob caught in Thomas’ throat. Jesus had just used the very words he himself had spoken a week before. Jesus had been there all along…

Thomas found he no longer needed the test he had proposed. As he gazed at the risen Savior, all doubt faded away. In fact, he saw with a faith more vibrant and clear than his brothers. Thomas took a step nearer to Jesus and fell at His feet. At that moment the one who was last to believe became the first to proclaim the risen Christ’s divinity.

Even when I am broken by sorrow and crippled by doubt, You receive me with tender compassion. I am so glad You know and understand me completely… and yet love me anyway. Help me know You are near even when my path is uncertain, and my faith worn thin. Then restore my strength once again that I might glorify Your name. Amen

Jesus can handle your doubt! Being in process doesn’t offend Him, it elicits His deep and profound compassion. Today, let’s take our doubts straight to Him and receive His presence and a deeper relationship with Him, even if He doesn’t answer every question. Come join the conversation on our blog! We would love to hear from you! ~ Devotionals Daily