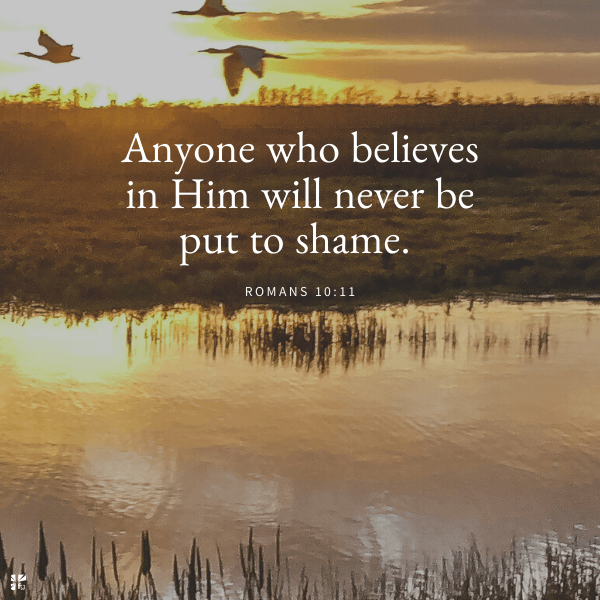 Editor’s Note: Phil Robertson doesn’t apologize for loving Jesus. He is unashamed about his past sins because he glories in the fact that they’re covered by Jesus and completely forgiven. Enjoy this message of hope from brother Phil and be encouraged.

Anyone who believes in Him will never be put to shame. — Romans 10:11

Thousands of people from all around the globe, young and old, black and white, doctors, lawyers, plumbers, college graduates, and high school dropouts all alike have walked through our door looking for something. Most of the time they didn’t even know what they were looking for, but the one thing the majority of them had in common was the guilt and shame of a lifetime of sin weighing heavily on their hearts and minds. Most of them felt as if they had lost the power to exercise their free will and that their futures were carved in stone because of their pasts, because the consequences of their sin were stacked high on their consciences like cordwood.

The young women, after years of being objectified as sexual property by older males, had begun to show the physical strain of abuse in their faces. They looked older, more haggard than they should have. Some had been pregnant in their teens, others had lost children to child protective services, and others had aborted their unborn children. Many of the men had been victims of sexual and physical abuse and had fallen into drug and alcohol addictions, and now they struggled to achieve healthy relationships with women. Trust me when I tell you, we’ve seen it all. Searchers! All of them were searching. But for what? They usually didn’t know.

And while their behaviors varied, they all looked the same to me. You could almost imagine they had neon signs dangling from their bowed necks: “I am guilty! If you knew only half of what I’ve done, you wouldn’t love me. In fact, you wouldn’t even speak to me.” In their minds, these signs were perpetually shining as constant reminders of their worthlessness. The inner voice of guilt and shame said, You are a failure! You are trash! You are guilty!

It is a horrible cycle, to be sure. People have always had the tendency to be sinful. But ever since we told God to take a hike, one of the casualties is that we have lost the ability to navigate safely through life. As I’ve pointed out, the absence of God — even though He’s not actually absent but ignored — means we are disconnected from truth and reality. Without someone greater than ourselves to guide our steps, we lose connection with the one reality that actually tells us what our true worth is. When we don’t acknowledge that we bear the image of God, how can we find our actual value?

Perhaps the most devastating casualty of evicting God from our culture is that, without Him, we have no path to redemption. In a godless world, once we’ve crossed the line, there is no way back. From that point on, we are defined in our minds and in the eyes of society by our sins. We tell ourselves, I am a drug addict! I am a whore! I am an alcoholic! I am a failure at marriage! I am — You get the point. Just fill in the blank with whatever negative image Satan has convinced you is true.

Once he has us defining ourselves by our sin, Satan proceeds to convince us that we are too far gone for God. “How could God love you after what you’ve done?” “Look at you! You’re a mess!” “You are beyond hope.”

But God created us with an ability to feel guilt and shame. They are designed to be warnings that we are on the wrong path, that we have wandered away from what will truly fulfill us, from the desire to know, love, and obey God our Father. But Satan? He’s pretty good at hijacking what God intended for good and using guilt and shame to our detriment. Instead of guilt and shame warning us to turn around, the Evil One uses these gifts to convince us there is no turning back.

This is, by the way, the power source of cancel culture. Those who delight in canceling others prey upon our fear that our guilt and shame will be exposed in order to gain control over us. This is why God commands us to confess our sins openly.

This has been my practice since I first became a follower of Jesus, and it’s worked well for me. Once in a while someone will point out a salty social media headline that says something like “Phil Robertson Has Affair.” My response is always the same. I laugh and say, “Well, duh! I already wrote about that in my book. That’s old news!” This is one reason neither Satan nor the cancel culture crowd can hold anything over my head: I’ve already come clean about my past before the entire world. If you are living in fear that someone will really know the true version of yourself, how about you just obey God?

Therefore, confess your sins to each other and pray for each other so that you may be healed. — James 5:16, emphasis added

I am well aware of the inner voice that threatens us with cancellation if we publicly admit our sins, but that voice isn’t ours. It only sounds like ours. It is the voice of the Evil One who knows how liberating public confession is. The last thing Satan wants us to do is admit our wrongdoing, because he knows once we come clean before others, he loses his power over us.

The problem is that once guilt and shame are used by the Evil One and by those doing his bidding, shame becomes our master. It takes our breath away and robs us of our rest. It is a heavy burden we carry twenty-four hours of every day. It nags us when we are awake and haunts us in our dreams. It prevents us from seeing that God has already provided a path out of the swamp that has become our lives.

When I think about the power of misguided guilt and shame to control us, I’ve often wondered why people ever come to Miss Kay and me in the first place. For some reason (I suspect it is a last-ditch stab in the dark) they journey through the planted pine thickets and swampy bayous to our house because they hope to find something, anything that will be a balm for their painful self-inflicted wounds that have begun to fester. By the time they wander into my house, all they can see is their moral rot and decay. They cannot, they dare not see themselves as image bearers of the Most High God. They want a little hope. Not much. Just enough to get them through the night. So they come with heads bowed low, barely able to even glance in my direction.

Most of them have heard my testimony and figured, Hey, if the Almighty can save a filthy wretch like Phil Robertson, maybe there’s hope for me. I’m not proud of my former life, when I lived in open rebellion to the Almighty, but I’m not ashamed to tell the story because it is in the telling that others begin to grasp an important, indisputable fact: our God specializes in restoring beauty to those who have made themselves ugly by sin. These people are right.

If God could save a man like me, just think what He can do with them.

The enemy twists and distorts God’s goodness at every turn. What the Father gave us for our good (the ability to feel guilt and shame) the enemy heaps on us unrelentingly and mercilessly! Think about the messages he hurls at you. Now what does God say in His grace? You have already been forgiven! Jesus paid the price! Confession is a beautiful thing! Come share your thoughts on the hope of Jesus. We want to hear from you. ~ Devotionals Daily