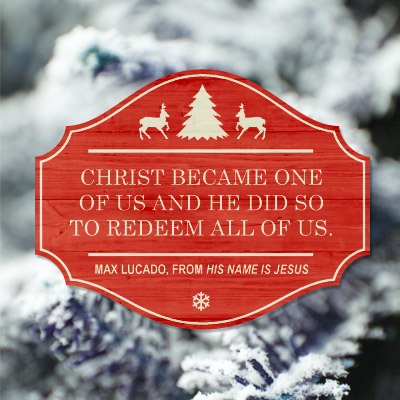 She will bring forth a son, and you shall call His name Jesus, for He will save His people from their sins.

In the four gospels of the New Testament, it’s His most common name — used almost six hundred times. And a common name it was. Jesus is the Greek form of Joshua, Jeshua, and Jehoshua — all familiar old testament names. When God chose the name His Son would carry, He chose a human name. He chose a name so typical that it would appear two or three times on any given class roll.

He was touchable, approachable, reachable. Those who walked with Him remembered Him not with a title or designation, but with a name — Jesus.

When God chose to reveal Himself, He did so (surprise of surprises) through a human body.

The tongue that called forth the dead was a human one. The hand that touched the leper had dirt under its nails. The feet upon which the woman wept were calloused and dusty and His tears… oh, don’t miss the tears… they came from a heart as broken as yours or mine ever has been.

So, people came to Him. My, how they came to Him! They came at night; they touched Him as He walked down the street; they followed Him around the sea;  they invited Him into their homes and placed their children at His feet. Why? Because He refused to be a statue in a cathedral or a priest in an elevated pulpit.

He chose instead to be Jesus.

If you were God, would you sleep on straw,

nurse from a breast, and be clothed in a diaper?

I wouldn’t, but Christ did.

He went from commanding angels to sleeping in the straw.

When He saw the size of the womb, He could have stopped.

When He saw how tiny His hand would be, how soft His voice would be,

how hungry His tummy would be, He could have stopped.

At the first whiff of the stinky stable, at the first gust of cold air.

The first time He scraped His knee or blew His nose or tasted burnt bagels,

He could have turned and walked out.

When He saw the dirt floor of His Nazareth house.

When Joseph gave Him a chore to do.

When His fellow students were dozing off during the reading of the Torah, His Torah.

At any point Jesus could have said, “That’s it! That’s enough! I’m going home.”

He didn’t, because He is love.

Angels watched as Mary changed God’s diaper. The universe watched with wonder as the Almighty learned to walk. Children played in the street with Him and had the synagogue leader in Nazareth known who was listening to His sermons…

Jesus may have had pimples. He may have been tone-deaf. Perhaps a girl down the street had a crush on Him or vice versa. It could be that His knees were bony.

One thing’s for sure: He was, while completely divine, completely human.

For thirty-three years He would feel everything you and I have ever felt. He felt weak. He grew weary. He was afraid of failure. He was susceptible to wooing women. He got colds, burped, and had body odor. His feelings got hurt. His feet got tired and His head ached.

To think of Jesus in such a light is — well, it seems almost irreverent, doesn’t it? It’s not something we like to do; it’s uncomfortable. It is much easier to keep the humanity out of the incarnation.

Clean the manure from around the manger. Wipe the sweat out of His eyes. Pretend He never snored or blew His nose or hit His thumb with a hammer…

But don’t do it. For heaven’s sake, don’t. Let Him be as human as He intended to be. Let Him into the mire and muck of our world for only if we let Him in can He pull us out.

Ignore the discomfort and the worry about irreverence and imagine Jesus as He was fully human. Imagine what His infancy was like, the early childhood years, the awkward preteen stage. What can you imagine about Jesus in the Flesh? Join the conversation on our blog! We would love to hear from you! ~ Devotionals Daily 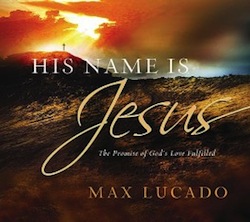