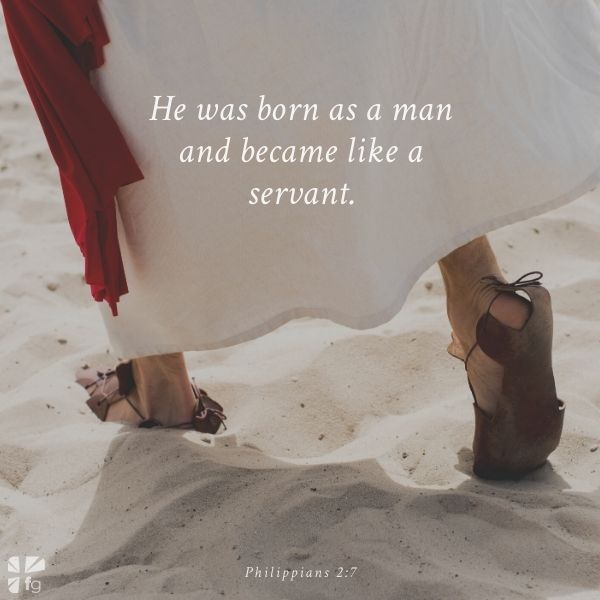 In the beginning was the Word, and the Word was with God, and the Word was God. He was with God in the beginning. Through Him all things were made; without Him nothing was made that has been made. In Him was life, and that life was the light of all mankind. The light shines in the darkness, and the darkness has not overcome it… The Word became flesh and made His dwelling among us. We have seen His glory, the glory of the one and only Son, who came from the Father, full of grace and truth. — John 1:1-5, John 1:14

When you were a child, what did you think clouds were made of? Cotton? Pillows? Something springy and soft? When you’re young, it’s hard to wrap your mind around the idea of air, ice particles, and liquid coming together to form a mass that — were you to touch it — would feel like nothing. To understand the concept of a cloud, it helps to initially put substance around it.

The concept of God can be equally difficult to wrap our minds around, even as adults. He is everywhere. He is outside of time. He is on the earth, but He is outside the earth. What does He look like, exactly? Where does He dwell, exactly? Is He up or down? East or west?

Jesus came to earth as the first tangible presence of God. Paul writes,

Christ Himself was like God in everything… He was born as a man and became like a servant. — Philippians 2:6-7 NCV

Jesus was a man, but He was also God. His role is summed up well in the Hebrew word Immanuel, which means “God with us.”

God sent Jesus so we would know what He was like and know that He understands us. Jesus was fully human, so He experienced the daily life of a human of His time. He experienced our physical limitations and the emotional pain, grief, and happiness we’ve all experienced on this earth.

God sent Jesus to tell us He knows what it is like to be a human in this world.

Because of Jesus, God is no longer a confusing, ethereal, unformed being located somewhere in the sky. Instead, God is right here. Near us and with us. Immanuel. In this session, you will take a deeper look into the biblical story of how Jesus arrived on earth, why He came the way that He did, and what all of this can teach you about God.

If you or any of your group members are just getting to know one another, take a few minutes to introduce yourselves. Then, to kick things off for this first session, discuss one of the following questions:

Jesus was fully divine. All-knowing. All-present. All-powerful. Yet the Bible makes it clear He was also fully human.

He was born as a man and became like a servant. — Philippians 2:7 NCV

There is something about keeping Jesus divine that keeps Him distant, packaged, and predictable. But let’s remember that the people who saw Him first… saw Him first as a person.

God had asked Joseph to go out on a limb. He was left with a hard choice: follow his will or the Lord’s. In the end, he knew there was only one option. For the only thing worse to Joseph than a venture into the unknown was denying his Master.

Gabriel had to wonder: God will become a baby? The heavens themselves could not contain Him. To imagine some mother burping God on her shoulder… well, that was beyond what even an angel could imagine.

The hometown of God would be a single-camel map dot on the edge of boredom. His earthly mother, Mary, was a Jewish peasant who had barely outgrown her acne. Joseph was a student of the Bible… but at the end of the day just a carpenter.

Fast-forward nine months. Mary and Joseph have made their way to the village of Bethlehem. Jesus will be born in a stable on the outskirts of town. It stinks, like all stables do. The stench of urine, dung, and sheep hangs in the air.

At times, that limb on which Joseph sat bounced furiously in the wind. But Joseph just shut his eyes and held on. And you can be sure of one thing: he never regretted it.

God wants us to know He gets us. Are your looks run-of-the-mill and your ways simple? So were Jesus’. Do you struggle financially? Jesus knows how you feel. Are you on the lower rungs of the social ladder? So was He. Ever feel betrayed? Christ can certainly relate.

Our God gets us.

Briefly review the outline for the video teaching and any notes you took. Write down what it means to you that God chose to become flesh and live among us. How does that help you to know that God understands everything that you are going through? How does it change your perspective of Him? What comfort does that provide to you? If you feel comfortable, share what you have written with the rest of the group.

One of the most important things you and your group members can do as a community is to pray for one another. This is not simply a closing prayer to end the group time but also a time to share prayer requests and review what God has done in your lives. So, record any prayer requests from your group members, and then commit to praying for those requests throughout the week. Also record any praise reports that people have to share.

Excerpted with permission from Jesus Study Guide: The God Who Knows Your Name by Max Lucado, copyright Max Lucado.