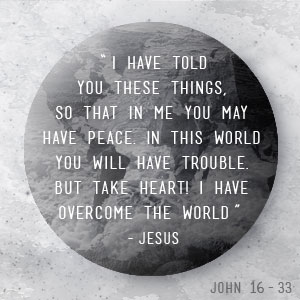 29His disciples said to Him, “See, now You are speaking plainly, and using no figure of speech! 30Now we are sure that You know all things, and have no need that anyone should question You. By this we believe that You came forth from God.”

31Jesus answered them, “Do you now believe? 32Indeed the hour is coming, yes, has now come, that you will be scattered, each to his own, and will leave Me alone. And yet I am not alone, because the Father is with Me. 33These things I have spoken to you, that in Me you may have peace. In the world you will have tribulation; but be of good cheer, I have overcome the world.”

Jesus Prays for Himself

1Jesus spoke these words, lifted up His eyes to heaven, and said: “Father, the hour has come. Glorify Your Son, that Your Son also may glorify You, 2as You have given Him authority over all flesh, that He should give eternal life to as many as You have given Him. 3And this is eternal life, that they may know You, the only true God, and Jesus Christ whom You have sent. 4I have glorified You on the earth. I have finished the work which You have given Me to do. 5And now, O Father, glorify Me together with Yourself, with the glory which I had with You before the world was.

Jesus Prays for His Disciples

“How can I pray for you?” It’s one of the kindest questions one person can ask another.

The night before He was crucified, the Lord Jesus prayed what has been called the greatest prayer recorded in Scripture. This “High Priestly Prayer” of Christ in John 17 is one of intercession, as the Lord prayed first for Himself and then for His current and future disciples.

At the heart of this prayer, we can see several ways that Jesus prayed for His followers. He prayed for our unity, asking the Father that His disciples would be “one” as He and the Father are one (John 17:11). While the world often tells us we must compromise convictions in order to achieve unity, the Father and Son share a unity based on perfect truth. So should our unity be based on the truth of Jesus and His Word.

Jesus also prayed for our joy, asking for His joy to be fulfilled in us (John 17:13). The language the Lord used here suggests the beautiful image of a cup being filled to its very brim with spiritual and heavenly bliss.

Whatever happens, we can have an overflowing joy through Jesus.

Next, Jesus prayed for our protection “from the evil one” (John 17:15). The Lord asked not for His followers to be evacuated from the dangers of Satan and his schemes, but rather that the Father would guard us and keep us from harm as we live for Christ.

Finally, Jesus prayed for our holiness. He asked the Father to sanctify His followers through His Word, which is truth (John 17:17).

Today, you can live with the confidence that Jesus never stops interceding for you in the presence of the Father.

Have you ever considered that Jesus intercedes specifically for you? Unity, joy, protection from evil, and holiness — those are the essentials. What else do you think Jesus prays for? How do you intercede for others? For whom do you pray? Join the conversation on our blog! We would love to hear your thoughts about intercession! ~ Devotionals Daily 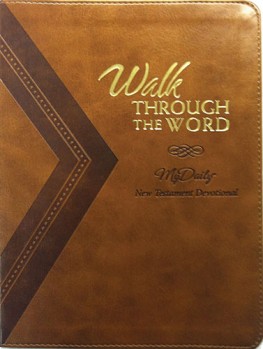