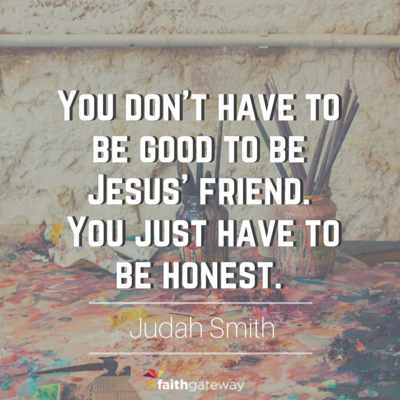 Jesus went to Zacchaeus’s house and became the guest of a notorious sinner. He went to Matthew’s house and ate dinner with many tax collectors and other disreputable sinners.

In full view of everyone, He hung out with today’s equivalent to pimps, prostitutes, and crackheads. In that culture, to eat with someone was to identify with them. Jesus associated Himself with people who were shunned by every upstanding Jew. They were the butts of jokes and the targets of smirks. No self-respecting person would risk befriending them for fear of being found guilty by association.

By everyone’s standards, Jesus was a good man. So making friends with bad people didn’t make sense. Preaching at them, rebuking them, criticizing them, mocking them — that was expected. Even applauded. But sitting around a table telling jokes and enjoying life together? That was shocking. That was tabloid material.

He liked spending time with sinners. He was God and He was perfect, but He spent much of the three-and-a-half years of his ministry hanging out with bad people. He talked with them, ate with them, cried with them, and served them. People weren’t just a charity project to Him. He cared about them and listened to them. He offered unconditional hope and compassion.

That’s why He spent His time with the needy, the helpless, and the depraved. He came down to their level because they could never rise to His. He wasn’t out to prove how good He was or how bad they were. He just wanted to offer them hope.

Jesus is the friend of people who are willing to admit that they have problems. If we understand that we have issues, if we recognize that we have stuff we cannot conquer, then Jesus is near to us.

Excerpted with permission from Jesus Is _______ by Judah Smith, copyright Thomas Nelson.

Is Jesus your friend? Or does your history, your messes and mistakes, what was done to you or by you make that thought seem ridiculous? Can you be honest today with Him and tell Him all of your mistakes (He already knows.) and ask Him to be your friend anyway (He already is.). Come join the conversation on our blog! We want to hear from you about letting Jesus be your friend.