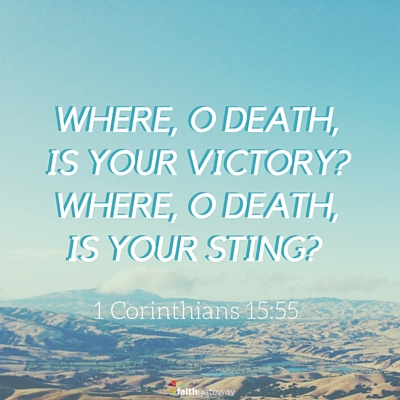 Since Christians will live forever, they are told not to fear in the face of death. Paul says,

Since we know we will be with God forever, there is no more fear of death for the Christian of true faith. In fact, death is even beneficial to a Christian, because it sends him to God, with whom he is longing to be. Paul writes,

The security of salvation is what liberates Christians to follow difficult teachings of Jesus and to self-sacrificially love one’s enemies, even being ready to die for them.

That is why some Christians have been willing to go to tumultuous Muslim contexts and serve those who could do nothing for them, even in the face of death. Ronnie Smith was a Texan science teacher who decided to move his family to Benghazi when the Libyan revolution was underway. For a few years, he taught chemistry to high school students in the war-torn country, bringing them hope when they had little. He wanted to serve people just as Jesus had, and just as people killed Jesus, so a group of radical Muslims killed Ronnie Smith.

A short time before his death, Ronnie Smith answered a survey indicating that the gospel is what encouraged him to serve people despite the risk of death. He knew his life was in danger before moving to Libya, but Jesus enabled him to answer jihad with compassion. Through the message of the gospel, Jesus made Ronnie Smith invincible. He was able to love without fear.

In February 2015, ISIS beheaded twenty-one Christians on a beach in Libya. In a video the men are seen moments before their execution, calling out to Jesus and mouthing prayers. Most of them were migrant laborers working in Libya to provide for their families in Egypt. Although ISIS slaughtered the men to shock the world with terror, the response of their families sent an altogether different message. In an interview with VICE News, the mother of twenty-four-year-old Abanoub Ayiad said, “May God forgive ISIS,… [but because of them] I gave the best gift to God: my son.” The mother of twenty-five-year-old Malak Ibrahim said, “I’m proud of my son. He did not change his faith till the last moment of death. I thank God… He is taking care of him.” The mother of twenty-nine- year-old Samuel Abraham said, “We thank ISIS. Now more people believe in Christianity because of them. ISIS showed what Christianity is.” The wife of twenty-six-year-old Milad Makin said, “ISIS thought they would break our hearts. They did not. Milad is a hero now and an inspiration for the whole world.”

As with Ronnie Smith, these twenty-one men had been transformed by the gospel, as had their families. They were able to live and die with confidence, and their families were able to rejoice in their deaths because they are now truly alive. Bishop Felobous, himself related to five of the slain men, even expressed sadness upon hearing that the Egyptian military was retaliating against ISIS. “I was very sad when I heard the news of the air strikes led by the Egyptian military against ISIS. God asked us to even love our enemies.” Even after they had slaughtered five of his relatives, Bishop Felobous was able to answer jihad with compassion.

According to numerous reports, one of the men on the beach in Libya was not an Egyptian Christian, but a citizen of Chad. It was not until he saw the faith of the men around him that he was moved to trust in Christ. When the time came to make his decision, asked whether he would denounce Christianity and live or proclaim the gospel and die, he said, “Their God is my God.”

He chose to live for one minute as a Christian rather than for the rest of his life after having denied Jesus.

In Christianity, Jesus shows Christians how to answer persecution with love. Although this suggestion might seem impossible to some and ridiculous to others, Jesus’ teachings were always radical, and they are only possible to follow if the gospel message is true. If we will live eternally with God in bliss, then we can lay down this life to love even our enemies. In the face of jihad, the Christian Jesus teaches His followers to respond with love.

Responding to the level of persecution and terror that ISIS has brought upon the world with compassion is something only the Holy Spirit could accomplish in our hearts. We would reply with hatred, but Jesus remarkably calls us to love our enemies… the very opposite of everything within our natural selves. Let’s not be afraid, but instead pray today for our brothers and sisters world-wide who are suffering persecution, imprisonment, oppression, and even martyrdom for the sake of the Gospel.  Come share your thoughts with us on our blog. We would love to hear from you. ~ Devotionals Daily