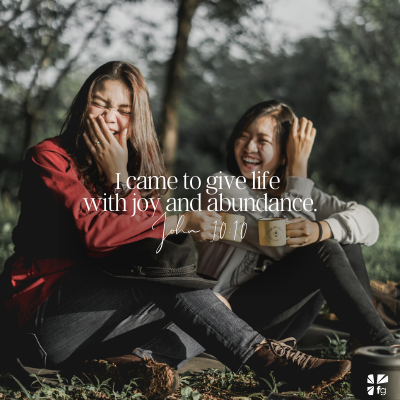 I have a sketch of Jesus laughing. It hangs on the wall across from my desk. It’s quite a drawing. His head is back. His mouth is open. His eyes are sparkling. He isn’t just grinning. He isn’t just chuckling. He’s roaring. He hasn’t heard or seen something like that in quite a while. He’s having trouble catching His breath.

It was given to me by an Episcopal priest who carries cigars in his pocket and collects portraits of Jesus smiling. “I give them to anyone who might be inclined to take God too seriously,” he explained as he handed me the gift.

He pegged me well.

I’m not one who easily envisions a smiling God. A weeping God, yes. An angry God, okay. A mighty God, you bet. But a chuckling God? It seems too… too... too unlike what God should do — and be. Which just shows how much I know — or don’t know — about God.

As my vision improves and I’m able to read without my stained glasses, I’m seeing that a sense of humor is perhaps the only way God has put up with us for so long.

Is that God with a smile as Moses does a double take at the burning bush that speaks?

Is He smiling again as Jonah lands on the beach, dripping gastric juices and smelling like whale breath?

Is that a twinkle in His eye as He watches the disciples feed thousands with one boy’s lunch?

Consider, for example, the wedding at Cana. We often talk about this wedding as the place where Jesus turned the water into wine. But why did Jesus go to the wedding in the first place? The answer is found in the second verse of John 2:

Jesus and His followers were also invited to the wedding. — John 2:2 NCV

When the bride and groom were putting the guest list together, Jesus’ name was included. And when Jesus showed up with a half- dozen friends, the invitation wasn’t rescinded. Whoever was hosting this party was happy to have Jesus present.

“Be sure to put Jesus’ name on the list,” he might have said. “He really lightens up a party.”

Jesus wasn’t invited because He was a celebrity. He wasn’t one yet. The invitation wasn’t motivated by His miracles. He’d yet to perform any. Why did they invite Him?

I suppose they liked Him. Big deal? I think so. I think it’s significant that common folk in a little town enjoyed being with Jesus. I think it’s noteworthy that the Almighty didn’t act high and mighty. The Holy One wasn’t holier-than-thou. The One who knew it all wasn’t a know-it-all. The One who made the stars didn’t keep His head in them. The One who owns all the stuff on earth never strutted it.

He could have been a name dropper: Did I ever tell you about the time Moses and I went up on the mountain?

He could have been a show-off: Hey, want Me to beam you into the twentieth century?

He could have been a smart aleck: I know what you’re thinking. Want Me to prove it?

He could have been highbrow and uppity: I’ve got some property on Jupiter...

Jesus could have been all of these, but He wasn’t.

His purpose was not to show off but to show up. He went to great pains to be as human as the guy down the street. He didn’t need to study, but He still went to the synagogue. He had no need for income, but He still worked in the workshop. He had known the fellowship of angels and had heard the harps of Heaven, yet He still went to parties thrown by tax collectors. And upon His shoulders rested the challenge of redeeming creation, but He still took time to walk for miles to go to a wedding in Cana.

There is no hint that He ever used His heavenly status for personal gain. Ever. You don’t get the impression that His neighbors grew sick of His haughtiness and asked, “Well, who do You think made You God?”

His faith made Him likable, not detestable. Jesus was accused of much, but of being a grump, sourpuss, or self-centered jerk? No. People didn’t groan when He appeared. They didn’t duck for cover when He entered the room.

He called them by name. He listened to their stories. He answered their questions.

He fished with fishermen and ate lunch with the little guy and spoke words of resounding affirmation. He went to enough parties that He was criticized for hanging out with rowdy people and questionable crowds.

People were drawn to Jesus. He was always on the guest list. Thousands came to hear Him. Hundreds chose to follow Him. They shut down their businesses and walked away from careers to be with Him. His purpose statement read:

Jesus was happy and wants us to be the same.

Would people say the same of us? Where did we get the notion that a good Christian is a solemn Christian? Who started the rumor that the sign of a disciple is a long face? How did we create this idea that the truly gifted are the heavyhearted?

Think about it. It had been a tough season. This wedding occurred after He had just spent forty days in the desert. No food or water. A standoff with the devil. A week breaking in some green-horn Galileans. A job change. He had left home. It hadn’t been easy. A break would be welcome. Good meal with some good wine and some good friends... Well, it sounded pretty nice.

So off they went.

His purpose wasn’t to turn the water into wine. That was a favor for His friends.

His purpose wasn’t to show His power. The wedding host didn’t even know what Jesus did.

His purpose wasn’t to preach. There is no record of a sermon.

This leaves only one reason. Fun. Jesus went to the wedding because He liked the people, He liked the food, and, Heaven forbid, He may have even wanted to swirl the bride around the dance floor a time or two. (After all, He’s planning a big wedding Himself. Maybe He wanted the practice?)

So forgive me, Deacon Drydust and Sister Somberheart. I’m sorry to rain on your dirge, but Jesus was a likable fellow. And His disciples should be the same. I’m not talking debauchery, drunkenness, and adultery. I’m not endorsing compromise, coarseness, or obscenity. I am simply crusading for the freedom to enjoy a good joke, enliven a dull party, and appreciate a fun evening.

Maybe these thoughts catch you by surprise. They do me. It’s been a while since I pegged Jesus as a party lover. But He was. His foes accused Him of eating too much, drinking too much, and hanging out with the wrong people!

I must confess: it’s been a while since I’ve been accused of having too much fun. How about you?

Remember that sketch of Jesus hanging in my office? What sort of portrait of Jesus hangs on the walls of your mind? Is He sad, somber, angry? Are His lips pursed? Is He judging you? If so, visualize the laughing Christ on my wall. I’ve needed the reminder more times than I can say. Jesus laughed. He had fun. He was always invited to the party, because people wanted to be near Him.

They didn’t fear His judgment. They knew He wouldn’t try to shut things down.

Who could be relied on to be the life of the party more than the One who came to give life with joy and abundance?

Do you envision Jesus as laughing? Having fun? Enjoying people? Being fun to be around? Do you imagine Him as a great friend that everyone wants to be around? Do you see Him as the One who loves nothing more than bringing joy? Come share with us on our blog. We want to hear from you about our joyful Jesus! ~ Devotionals Daily