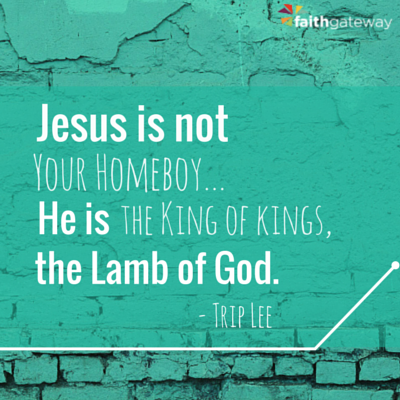 One of my favorite parts of each day is my son’s bedtime.

There is the selfish part of me that thinks, Yes! Freedom from the tyranny of the toddler! But what really makes this part of the day so special is that I get to read to my son. I’ve been waiting my whole life to use some of these special voices without people thinking I’m weird. My son is two years old, and this is my chance.

Lots of our family members have kindly purchased books for my little one, many of them Christian books that summarize Bible stories. Some of these books are amazing, and others are not so amazing. My biggest problem is often with the illustrations. They often make Jesus look like a weirdo.

I was looking through one of them and saw a picture of Jesus in a field with beautiful hair and a bunny on His shoulder, smiling while He played the ukulele. Are you kidding me? There are some things Scripture doesn’t talk about, but I’m pretty sure my Lord did not play the ukulele or let rabbit sit on His shoulder like parrots.

That’s an extreme example, but many of the other pictures we get of Jesus aren’t much better. He’s weak, soft-spoken, and unable to defend Himself against Roman soldiers. I don’t know who that guy is, but my Lord wasn’t weak. In fact, He’s the Almighty. When He was on earth, He told waves to calm down and they obeyed Him. Evil spirits threw tantrums when He showed up in their towns. He’s the God-man, and He’s worth following.

More Than Another Guy

I remember the first time I heard Kanye and Jay-Z’s Watch the Throne album. In one of the songs they made mention of Jesus, which may be exciting to some, but not to me. They listed some other historical figures like Malcolm X and Martin Luther King Jr., and then they mentioned their wives.

They also mentioned Mary and Joseph. And then at the end of that list they threw in Jesus, baby Jesus to be specific.

When I heard that, the first thing I thought was, Those guys don’t understand who Jesus is. I’m not trying to judge their souls over what’s in a rap album, but there’s no way you could treat Jesus like just another guy if you knew who He was.

People constantly talk about Jesus as if He were just another good man and a good teacher. This couldn’t be further from the truth, but people have been making this mistake for a long time. Jesus asked His disciples,

He was referring to Himself with that title.The disciples had been around enough to hear what people were saying about their leader. I can imagine that as Jesus asked that question, different guys were chiming in with stuff they’d heard. They responded,

Some say John the Baptist; others say Elijah; and still others, Jeremiah or one of the prophets. – Matthew 16:14

Now, you notice that no one responded with any negative views of Jesus. All the responses were positive, but none of them was really the correct response. Yes, all these men were honored, amazing, historic men of God. But none of them were who Jesus was. In fact, Jesus created those men! When Jesus asked the disciples who they said He was, God revealed the correct answer to Peter:

Jesus was way more than just some prophet or teacher. And to point to Him as anything less than the King of kings, the Lamb of God who takes away the sins of the world, is to reject Him and insult Him.

This is a King worth handing the keys of my life over to. Why wouldn’t I deny myself for the opportunity to be led by Him? There’s no one more trustworthy. There’s never been a more humble servant or triumphant deliverer.

So every day I choose again to get up and follow Him, and though it’s never easy, He’s always right. Real love doesn’t overlook harm to make you feel better in the moment.

Real love tells the truth even when it’s hard.

Jesus loves us too much to leave us where we are. And He died to take us to the Father.

Watch the Video for Rise

Excerpted with permission from Rise: Get Up And Live In God’s Great Story by Trip Lee, copyright Thomas Nelson, 2015.

Is Jesus the King of your life? What is your relationship with Him like? What do you want it to be like? Come join the conversation on our blog! We’d love to hear from you! ~ Devotionals Daily