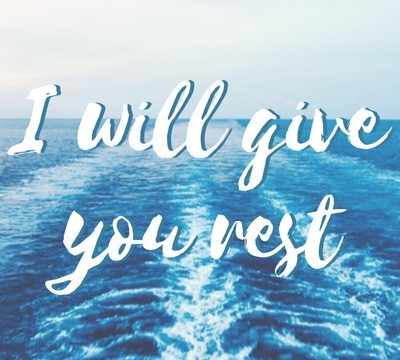 …He gave His one and only Son…

Two of our three daughters were born in the South Zone of Rio de Janeiro, Brazil. We lived in the North Zone, separated from our doctor’s office and hospital by a tunnel-pierced mountain range. During Denalyn’s many months of pregnancy, we made the drive often.

We didn’t complain. Signs of life do a samba on every street corner. Copacabana and her bathers. Ipanema and her coffee bars. Gavea and her glamour. We never begrudged the South Zone forays. But they sure did bewilder me. I kept getting lost. I’m directionally challenged anyway, prone to take a wrong turn between the bedroom and bathroom. Complicate my disorientation with randomly mapped three-hundred-year-old streets, and I don’t stand a chance.

I had one salvation. Jesus. Literally, Jesus. The Christ the Redeemer statue. The figure stands guard over the city, one hundred and twenty-five feet tall with an arm span of nearly a hundred feet. More than a thousand tons of reinforced steel. The head alone measures ten feet from chin to scalp. Perched a mile and a half above sea level on Corcovado Mountain, the elevated Jesus is always visible. Especially to those who are looking for it. Since I was often lost, I was often looking. As a sailor seeks land, I searched for the statue, peering between the phone lines and rooftops for the familiar Face. Find Him and find my bearings.

John 3:16 offers you an identical promise. The verse elevates Christ to thin-air loftiness, crowning Him with the most regal of titles: “One and Only Son.” The Greek word for “one and only” is monogenes, an adjective compounded of monos (“only”) and genes (“species, race, family, offspring, kind”). When used in the Bible, “one and only” almost always describes a parent-child relationship. Luke employs it to identify the widow’s son: “the only son of his mother” (Luke 7:12). The writer of Hebrews states, “Abraham… was ready to sacrifice his only son, Isaac” (Hebrews 11:17). John enlists the phrase five times, in each case highlighting the unparalleled relationship between Jesus and God:

In three of the five appearances, the phrase modifies the noun Son. In the two cases it doesn’t, the Son was either “from the Father” or “at the Father’s side” (John 1:14, John 1:18). Monogenes, then, highlights the particular relationship between Jesus and God. Though God is the father of all humanity, Jesus alone is the monogenetic Son of God, because only Christ has God’s genes or genetic makeup.

The familiar translation “only begotten Son” (John 3:16) conveys this truth. When parents beget or conceive a child, they transfer their DNA to the newborn. Jesus shares God’s DNA. Jesus isn’t begotten in the sense that He began but in the sense that He and God have the same essence, eternal life span, unending wisdom, and tireless energy.

“Anyone who has seen Me has seen the Father!” Jesus claimed (John 14:9). And the epistle to the Hebrews concurs: “[Christ] is the radiance of [God’s] glory and the exact representation of His nature” (Hebrews 1:3).

Jesus occupies the peerless “Christ the Redeemer” pedestal. He claims, not the most authority, but all authority.

Don’t hurry through those words. They’re either the last straw or the ultimate truth. They warrant deliberate thought.

“My Father has given Me authority over everything.”

Does Jesus own the only scepter in the universe? One follower declared as much. A Roman officer sent a message to Jesus, asking the teacher to heal his servant. So Jesus journeyed toward the soldier’s house. But the man sent friends to intercept Jesus, telling Him not to make an unnecessary trip.

Just say the word from where you are, and my servant will be healed. I know this because I am under the authority of my superior officers, and I have authority over my soldiers. I only need to say, ‘Go,’ and they go, or ‘Come,’ and they come. And if I say to my slaves, ‘Do this,’ they do it. — Luke 7:7-8

This officer understood authority: when the one in charge commands, the ones beneath obey. The soldier effectively said, “Jesus, you call the shots, inhabit the throne. You wear five stars on your shoulder.” He saluted Christ as supreme commander. And Christ didn’t correct him! Jesus didn’t dilute the man’s opinion or adjust his comments. “You flatter me,” He could have said. But He didn’t dismiss the adulation as overstatement; rather He accepted it as appropriate.

Christ claims ultimate clout. Unshared supremacy. He steers the ship and pilots the plane. When He darts His eyes, oceans swell. When He clears His throat, birds migrate. He banishes bacteria with a single thought.

He sustains everything by the mighty power of His command. — Hebrews 1:3

He is to history what a weaver is to a tapestry. I once watched a weaver work at a downtown San Antonio market. She selected threads from her bag and arranged them first on the frame, then on the shuttle. She next worked the shuttle back and forth over the threads, intertwining colors, overlapping textures. In a matter of moments a design appeared.

Christ, in like manner, weaves His story. Every person is a thread, every moment a color, every era a pass of the shuttle. Jesus steadily interweaves the embroidery of humankind.

‘My thoughts are nothing like your thoughts,’ says the Lord. ‘And My ways are far beyond anything you could imagine’. — Isaiah 55:8

A root meaning of the word translated thoughts is “artistic craftmanship.” As if God says, “My artistry is far beyond anything you could imagine.”

Jesus enjoys an intimacy with God, a mutuality the Father shares with no one else.

Married couples know something of this. They finish each other’s sentences, anticipate each other’s actions. Some even begin to look like each other (a possibility that deeply troubles my wife). Denalyn and I have been married more than twenty-five years. We no longer converse; we communicate in code. She walks into the kitchen while I’m making a sandwich.

I’ll open the fridge and stare for a few moments. “Denalyn?” She’ll look at my sandwich preparations and answer, “Mayo on the top shelf. Pickles on the door.”

She knows what I’ll say before I say it. Consequently, she can speak on my behalf with highest credibility. If she says, “Max would prefer a different color” or “Max would approve this idea,” listen to her. She knows what she’s talking about. She qualifies as my proxy like no one else.

How much more does Jesus qualify as God’s! Jesus “who exists at the very heart of the Father, has made Him plain as day” (John 1:18). When Jesus says, “In My Father’s house are many mansions” (John 14:2), count on it. He knows. He has walked them. When He says, “You are worth more than many sparrows” (Matthew 10:31), trust Him. Jesus knows. He knows the value of every creature. When Christ declares, “Your Father knows what you need before you ask Him” (Matthew 6:8), believe it. After all,

Heaven’s door has one key, and Jesus holds it.

“He was teaching them as one who had authority” (Matthew 7:29). Jesus knows the dimensions of God’s throne room, the fragrance of its incense, the favorite songs of the unceasing choir. He has a unique, one-of-a-kind, unrivaled knowledge of God and wants to share His knowledge with you. “No one really knows the Father except the Son and those to whom the Son chooses to reveal Him” (Matthew 11:27).

Jesus doesn’t boast in His knowledge; He shares it. He doesn’t gloat; He gives. He doesn’t revel; He reveals. He reveals to us the secrets of eternity. And He shares them, not just with the top brass or purebred, but with the hungry and needy. In the very next line, Jesus invites:

Come to me, all of you who are weary and carry heavy burdens, and I will give you rest. Take My yoke upon you. Let Me teach you, because I am humble and gentle at heart, and you will find rest for your souls. – Matthew 11:28–29

Do yourself a favor. Find the brightest highlighter manufactured and the darkest ink produced. Underscore, underline, and accept His invitation: “Let Me teach you…”

Don’t we need to learn? We know so much, and yet we know so little. The age of information is the age of confusion: much know-how, hardly any know-why.

We need answers. Jesus offers them.

But can we trust Him? Only one way to know. Do what I did in Rio. Seek Him out. Lift up your eyes, and set your sights on Jesus. No passing glances or occasional glimpses. Enroll in His school. “Let Me teach you…” Make Him your polestar, your point of reference. Search the crowded streets and shadow-casting roofs until you spot His face, and then set your sights on Him.

You’ll find more than a hospital.

You’ll find the Only One and Only.

Excerpted with permission from 3:16 by Max Lucado, copyright Thomas Nelson, 2014.

He’s ready and waiting to be your only One and only! Come join the conversation on our blog. We would love to hear from you! ~ Devotionals Daily