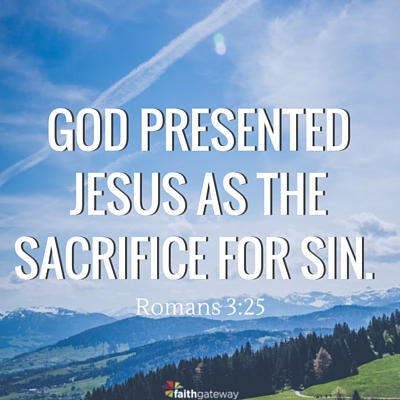 Back in our elementary school days, my brother received a BB gun for Christmas. We immediately set up a firing range in the backyard and spent the afternoon shooting at an archery target. Growing bored with the ease of hitting the circle, my brother sent me to fetch a hand mirror. He placed the gun backward on his shoulder, spotted the archery bull’s-eye in the mirror, and did his best Buffalo Bill imitation.

But he missed the target.

He soon appeared at the back fence, asking who had shot the BB gun and who was going to pay for his sliding-glass door.

At this point I disowned my brother. I changed my last name and claimed to be a holiday visitor from Canada.

My father was more noble than I. Hearing the noise, he appeared in the backyard, freshly rousted from his Christmas Day nap, and talked with the neighbor. Among his words were these:

“Yes, they are my children.”

“Yes, I’ll pay for their mistakes.”

God presented Jesus as the sacrifice for sin. – Romans 3:25

To be saved by grace is to be saved by Jesus not by an idea, doctrine, creed, or church membership, but by Jesus Himself, who will sweep into heaven anyone who so much as gives Him the nod.

If we walk in the light as He is in the light, we have fellowship with one another, and the blood of Jesus Christ His Son cleanses us from all sin. – 1 John 1:7

God didn’t overlook your sins, lest He endorse them. He didn’t punish you, lest He destroy you. He instead found a way to punish the sin and preserve the sinner.

Jesus took your punishment, and God gave you credit for Jesus’ perfection.

Have you ever missed the target? Have you ever tried to pay for your mistakes? We can’t do it! Only Christ, our perfect Savior, could pay the price and endure the punishment in our stead. Join the conversation on our blog! We’d love to hear from you about our mistakes being taken care of by Jesus! ~ Devotionals Daily