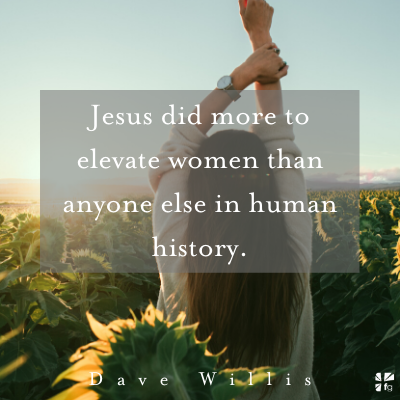 “Jesus Christ raised women above the condition of mere slaves, mere ministers to the passions of man, raised them by His sympathy, to be Ministers of God.” – Florence Nightingale

We are living in a time in history where nearly everyone claims to be a respecter of women; but so many men’s lives (and behind-closed-doors seedy scandals) show their so-called respect falls short of a perfect standard. When it comes to the issue of respecting women (and all other issues as well), I’ve found a man who lives up to the hype and does it right. Jesus is the only role model I’ve ever had who has never fallen short or let me down.

Jesus did more to elevate women than anyone else in human history.

He carried out His earthly ministry in a time when females were placed on the social hierarchy somewhere between animals and men, but Jesus elevated their status through His words, His actions and His miracles. His countercultural approach to women was viewed as one of the most radical aspects of His ministry.

It’s ironic that the very Church Jesus started is now seen by many as an institution with repressive roots when it comes to respecting women. Both inside and outside the church, we need a history lesson about what Jesus actually did and what He actually taught. His timeless example is still our best example.

Jesus taught men how to respect women instead of lusting after them. I’d even argue that Jesus taught men how to look at women. Sure, we don’t have photographs or videos showing how Jesus interacted with women, but the Gospels paint a vivid picture. In light of the historical context, we can see much about how Jesus must have looked at women. He looked at them with compassion, genuine concern and grace.

Many women of Jesus day had probably never been looked at in this way. What we know from historical context is that women who were often viewed by men in one of three negative ways: with lust, with distrust, or with disgust. Let me briefly unpack each of these:

Jesus wanted to make it clear that God’s plan for sex was specifically for a monogamous, lifelong marriage. Later, the Apostle Paul would take this teaching even further by reminding Christ-followers that to have sex is to become “one” with that person in a sacred way and we should never become one with prostitutes. The very arrangement dehumanizes and disrespects all people involved and replaces love with lust.

Jesus’ message was consistently about love and the Bible consistently displays how love is the opposite of lust.

Respect for women and lust of women can’t coexist in the same mind. Each day, you must decide which one gets to stay.

The “distrust” view can be seen in that women’s testimony wasn’t considered valid in the courts of law of Jesus’ day. There was a collective indifference and distrust toward the views, opinions and even eyewitness accounts of women. Jesus turned this misogynistic, sexist viewpoint on its head in a variety of ways. Jesus’ dialogues with many women are recorded in the Gospels and the Gospels report that was women who first discovered His empty tomb.

The “disgust” viewpoint of Jesus’ day was perhaps the most disrespectful mindset of all. It forced women to the outskirts of society. It took regular parts of a woman’s life like her menstrual cycle and stigmatized it. Blood flow made a person ceremonially unclean meaning they couldn’t participate in public worship or many other aspects of public life. For one week a month, a woman’s menstrual cycle prohibited her from the most basic freedoms.

Jesus healed a woman who had suffered with what the Bible describes as “an issue of blood” for twelve years. We don’t know the exact circumstances, but the Scriptures infer she’d been afflicted with a severe form of endometriosis or a similar condition causing continuous blood flow and creating unimaginable physical, financial, emotional, and relationship hardships. With one touch, Jesus set her free from this ailment and all the stigmas that accompanied it.

There are countless other examples in the Gospels where Jesus showed His profound respect for women of all walks of life from peasants and prostitutes to relatives and royalty. Some of Jesus’ most heartfelt interactions in the Gospels were in conversations with women even though He was living in a time and culture when it was taboo for a man to interact with women. In the name of love and respect, Jesus was willing to break down man-made cultural barriers that were harmful to women.

Renowned theologian Dr. Wayne Grudem may have summed it up best in his book Evangelical Feminism and Biblical Truth. Dr. Grudem meticulously exegetes Scripture and weighs his findings against the works of other biblical scholars and the shifting tides of public opinion. Dr. Grudem’s research convinced him that Jesus never lowered men or men’s unique biblical mandate to be servant leaders. He elevated men; but just as important, Jesus elevated women too. Dr. Grudem explains,

“The overall picture, however, is that Jesus treated women as equals in a way that was surprising for first-century culture. We should be thankful that Jesus honored women, and treated them as persons just as He treated men. He talked openly with women, to the amazement of His disciples (John 4:1-27), taught women (Luke 10:38-42, John 4:7-26; John 11:21-27), had women among the band of disciples who traveled with Him (Luke 8:1-3), accepted monetary support and ministry from them (Mark 15:40-41; Luke 8:3), and used women as well as men as teaching examples (Mark 12:41-44; Luke 15:8-10; Luke 18:1-8). Jesus thus set a pattern that should forever challenge all cultures that treat women as second-class citizens, as it no doubt challenged and rebuked the culture of Jesus’ day.” (Grudem, Evangelical Feminism and Biblical Truth, 2004, p. 161)

We live in a world where it’s easy to become jaded, cynical and distrusting toward people’s motives. It’s hard to find good role models in any area, and especially in this area of finding good men who truly respect women. I still believe there are plenty of men out there who are doing it right and are worthy of our emulation, but above all else, we can and should always look to Christ as our unfailing example in this area and all other areas. He’s the one who will never let us down. When we’re following Him, we’re truly always headed in the right direction!

No wonder women flocked to Jesus! He is the ultimate example for us today for how women, as well as men, should be treated. With respect, kindness, honor, and love. Come share your thoughts on Jesus’ behavior toward women on our blog. We want to hear from you! ~ Devotionals Daily