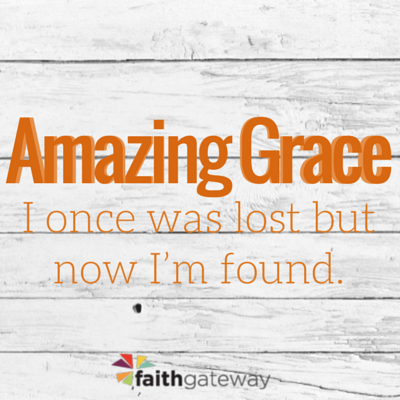 But while his son was still a long way off, his father saw him and was filled with compassion for him; he ran to his son, threw his arms around him and kissed him. “This son of mine was dead and is alive again; he was lost and is found. – Luke 15:20, Luke 15:24

In a story Jesus told about a father and two sons, the younger one had gone off and “squandered his wealth in wild living” (Luke 15:13). Then when a famine came and his money was gone, he found himself tending pigs and wishing they would share with him the pods they were eating. The emptiness of his stomach brought him to his senses, so he mentally drafted an apology and request for forgiveness, swallowed hard, and headed home. And he never had a chance to give his speech!

He had been watching for his son (he hadn’t given up hope); he ran toward the boy (hardly dignified), and he celebrated his son’s return. What amazing grace!

Maybe your wandering was a lifestyle change or more a matter of the heart. If you’ve come to your senses, that past doesn’t matter. Your heavenly Father runs toward you to celebrate your return.

“Amazing grace!.. I once was lost but now I’m found, was blind but now I see!”

Excerpted with permission from The Story Devotional by Randy Frazee, copyright Zondervan, 2014.

Join the conversation on our blog! We’d love to hear from you! ~ Devotionals Daily