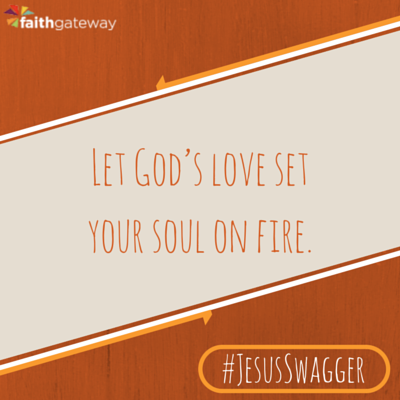 At the end of your life, how will people know that you lived for Jesus? What about your everyday attitude will leave them wondering about the greatness of God? Will it be the way you treated people? The confidence you walked with? The way you feared God, loved without limits, shared your faith, or modeled Jesus? Jesus didn’t die an extravagant death so that we could live mediocre and comfortable lives. The Man who gave His life for us expects nothing less than our best, and I don’t believe that’s too much to give.

Few of us have had the honor of seeing a life that truly lifts the glory and transcendental beauty of Jesus. And while the world continues to see war, darkness, and the pursuit of self-righteousness, the light you give off — your Jesus swagger — could help many down the narrow path you and I are called to walk.

If you think the way you act is irrelevant to your walk with Jesus, you’re dead wrong. Not only are your actions viewed as a direct correlation to your relationship with Christ, but people from the outside will always be looking for a flaw to call you out on. I’m not saying this is fair, but I am saying that it’s true. If you frequent the national news channels, you’ll notice that most of the publicity Christianity seems to get surrounds a group of people who claim to follow Christ, but are doing something irresponsible and hateful, like picketing soldiers’ funerals. What are observers supposed to think?

Gandhi is often quoted as saying, “I love your Christ, but I dislike your Christianity.” Ouch. That hurts.

But hey! He just said what everyone else was thinking. From the outside looking in, all he could see was a group of individuals who were unlike the God they were claiming to reflect. How can we let this go on, when we could be the ones to stop it?

The way you walk, talk, and present yourself to others matters when it comes to your faith. Why? Because if you claim to be a Christian, then people are going to expect you to act like one. Simple. Your swagger truly matters. No matter how long or how briefly you’ve known Jesus as your Lord, you are held to a higher standard of accountability by those around you.

Although there is freedom and grace in the arms of Christ, we are all still called to live above reproach in all that we do. This means that no matter the circumstance, you are called to reflect an image that portrays the purity and boldness of Christ himself. I know that may seem like a tough act to follow, but that’s the beauty of the Holy Spirit. God intrinsically designed us to take the Holy Spirit into our lives and allow Him to guide and direct us in a way that reflects true Christianity, and to deter us from embracing things that are not from Him.

Romans 6:1-20 is one of my favorite passages in the Bible: it depicts the true image of who we are called to be in Christ. In encouraging others to pursue a lifestyle that flees from sin, Paul writes:

So what do we do? Keep on sinning so God can keep on forgiving? I should hope not! If we’ve left the country where sin is sovereign, how can we still live in our old house there? Or didn’t you realize we packed up and left there for good? That is what happened in baptism. When we went under the water, we left the old country of sin behind; when we came up out of the water, we entered into the new country of grace — a new life in a new land! That’s what baptism into the life of Jesus means. When we are lowered into the water, it is like the burial of Jesus; when we are raised up out of the water, it is like the resurrection of Jesus. Each of us is raised into a light-filled world by our Father so that we can see where we’re going in our new grace-sovereign country. – Romas 6:1-5 The Message

We are new! Can you feel that? You and I are new creations, with new hearts, new minds, and new destinations. It’s as if God has rerouted us midflight. We are no longer who we once thought we were, but instead who God has called us to be. The paths we have been taking have been repaved with purpose and worth. What a beautiful thing.

Paul goes on to say,

Could it be any clearer? Our old way of life was nailed to the cross with Christ, a decisive end to that sin-miserable life — no longer at sin’s every beck and call!… Never again will death have the last word. When Jesus died, he took sin down with him, but alive He brings God down to us. From now on, think of it this way: Sin speaks a dead language that means nothing to you; God speaks your mother tongue, and you hang on every word. You are dead to sin and alive to God. That’s what Jesus did. That means you must not give sin a vote in the way you conduct your lives. Don’t give it the time of day. Don’t even run little errands that are connected with that old way of life. Throw yourselves wholeheartedly and full-time — remember, you’ve been raised from the dead! — into God’s way of doing things. Sin can’t tell you how to live. After all, you’re not living under that old tyranny any longer. You’re living in the freedom of God. – Romans 6:6–14 The Message

What was once a swagger that thrived off our selfishness has now turned into a Jesus swagger, fueled by a hunger and thirst to reflect the indescribable beauty of Jesus.

This uncontainable thirst cannot be quenched by anything of this world, but only through an everlasting relationship with Christ.

Well then, since God’s grace has set us free from the law, does that mean we can go on sinning? Of course not! Don’t you realize that you become the slave of whatever you choose to obey? You can be a slave to sin, which leads to death, or you can choose to obey God, which leads to righteous living. Thank God! Once you were slaves of sin, but now you wholeheartedly obey this teaching we have given you. Now you are free from your slavery to sin, and you have become slaves to righteous living. Because of the weakness of your human nature, I am using the illustration of slavery to help you understand all this. Previously, you let yourselves be slaves to impurity and lawlessness, which led ever deeper into sin. Now you must give yourselves to be slaves to righteous living so that you will become holy. When you were slaves to sin, you were free from the obligation to do right. And what was the result? You are now ashamed of the things you used to do, things that end in eternal doom. – Romans 6:15–21

So we finally have freedom from the bondage of sin and shame. Yeah, it’s a relief. Our mistakes no longer define who we are, but instead we are to find worth in the name of Jesus. But we are not called to take this gift and run, or to ignore God, but to pursue Him and thank Him for the liberation He has provided us.

Don’t waste another moment away from this new righteousness. Don’t give your old ways a moment’s time. And don’t tease yourself by setting foot in your old stomping grounds. You are new, forgiven, and free. Let God’s love set your soul on fire.

Watch the Video for Jesus Swagger

“You are new, forgiven, and free” so let that freedom in Christ influence your daily walk and be reflected in your relationships with others. Join the conversation on the blog! We’d love to hear from you! ~ Devotionals Daily